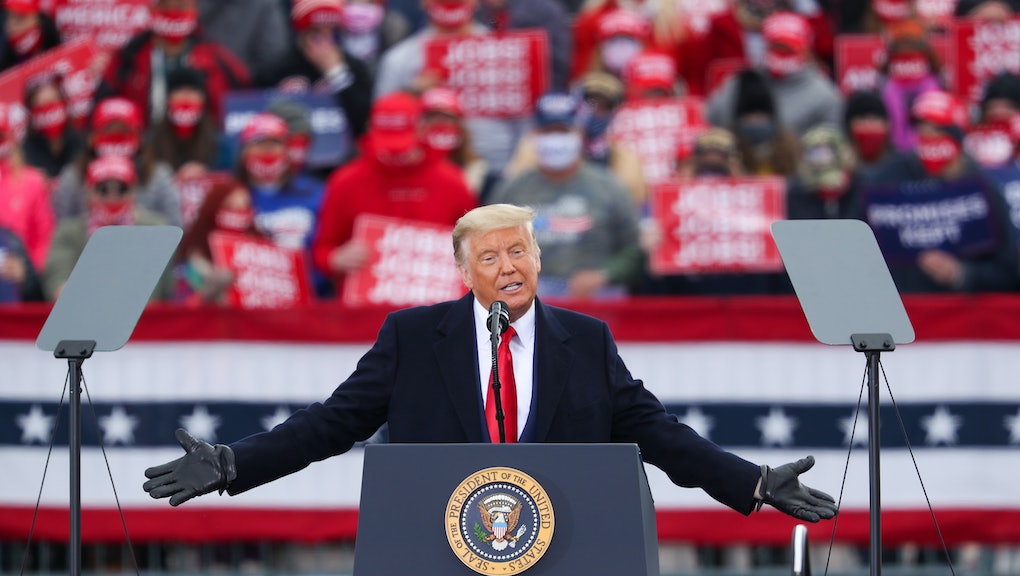 With less than 48 hours to go until he reverts back to a private citizen, soon-to-be-ex-President Donald Trump is busy busy busy with the important work of a nation still reeling from the attempted coup he helped inspire. And to Trump, that work evidently includes launching a massive effort to create a "National Garden of American Heroes" that seems as chaotic and random as it does unnecessary and bloated.

In a lengthy executive order published Monday afternoon, Trump cites "dangerous anti-American extremism that seeks to dismantle our country’s history, institutions, and very identity" as his impetus for creating his as-of-yet geographically ambiguous garden, which will feature dozens of statues of "historically significant" Americans.

That's where things get weird.

With the explanation that "each individual has been chosen for embodying the American spirit of daring and defiance, excellence and adventure, courage and confidence, loyalty and love," Trump goes on to list a dizzying litany of historical figures, seemingly chosen at random. Even by the nebulous criteria set out by the President, the list of proposed statue recipients shares no commonality or unifying sense of purpose and impact. Instead, it's a befuddling mix of celebrities, soldiers, politicians, and vaguely famous notables, many of whom would find the very idea of standing side by side with one another hilarious and bizarre.

Here is just a small, small sample of people the president intends to commemorate:

The list goes on and on and on, with each name adding to the sense that this is a collection of people chosen out of exaggerated bravado rather than deep historical significance. Alex Trebek? A great TV game show host, sure, but a national hero worthy of immortalization alongside Abraham Lincoln and Fredrick Douglass? Not so much. And how would committed Socialist Helen Keller feel about her statue standing in the same garden as Joseph McCarthy enabler Elia Kazan, or arch-conservative Barry Goldwater? Does it make sense for labor rights hero Samuel Gompers to be commemorated alongside viciously anti-Union Supreme Court Justice Antonin Scalia? Samuel Colt is only on this list because he invented a cheaper, more effective way to kill people!

Putting aside the odds of whether or not the President even knows who a fraction of his "greatest Americans who have ever lived" are, his National Garden sounds more like a monument to Trump's own sense of importance-by-proxy: The more famous people you can have associated with your name, the more famous you, yourself become. That there's no other rhyme or reason beyond that doesn't matter when all he seems to care about is fame and ego.

Per the president's order, the next step in the process of making his cavalcade of personalities a reality is for the Secretary of the Interior to pick a physical site for the garden — presumably one large enough to accomodate the overstuffed list of notables the president wants etched into stone. Additionally, Trump requested that the National Counsels for the Arts and Humanities respectively "target spending one-twelfth of the discretionary funds available to their agencies" for commissioning the dozens of proposed statues.

With a pandemic raging, the economy in shambles, and fascism on the rise, this is what Trump has chosen to work on in his last few days in office: statues of John Wayne and Bob Hope. Glad to see his priorities are as compelling as ever.

More like this
I never want Tucker Carlson to stop talking about Nicki Minaj's cousin's friend's enormous balls
By Rafi Schwartz
Oops, the Arizona recount the MAGA crew demanded actually took votes away from Trump
By Rafi Schwartz
Wow, Donald Trump is actually following through on a threat to sue someone
By Rafi Schwartz
Stay up to date