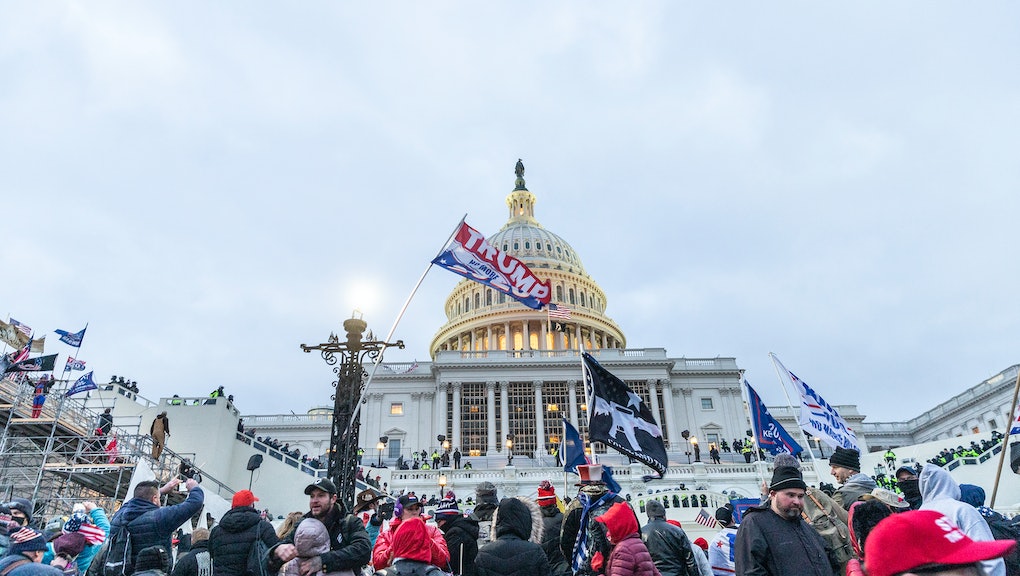 It's been one week since President Trump incited a mob of MAGA cultists, white nationalists, QAnon conspiracy theorists, and happy-go-lucky GOP terror tourists to storm the United States Capitol in a brute force attempt to overturn President-elect Joe Biden's electoral victory. In that time we've slowly learned more about the insurrection effort that left multiple people dead, and which has brought Trump to the brink of a second impeachment. From stolen classified documents, to likely plans to take hostages, each new revelation brings the horrifying reality of what occurred into sharper and sharper focus.

But underneath it all, an even more terrifying narrative has begun to emerge — one that points to the events of last Wednesday as having not been simply a mob riot, and not even simply a pre-planned mob riot. Instead, several Democratic lawmakers have intimated to varying degrees of specificity that the Trump insurrection was actively coordinated and aided, at least in part, by people inside the Capitol.

The evidence thus far is all speculative. But taken en masse, it paints a concerning picture. Take, for instance, the since-deleted Periscope video from "Stop the Steal" organizer Ali Alexander, who helped plan the Jan. 6 rally-cum-riot. In it, Alexander claims far-right GOP Reps. Paul Gosar (Ariz.), Andy Biggs (Ariz.), and Mo Brooks (Ala.) all helped him organize the day's events, in order to exert "maximum pressure on Congress while they were voting" on the routine certification of Biden's electoral victory.

Biggs's office has denied any contact with Alexander, but neither Brooks nor Gosar responded to The Washington Post when asked if and how they were involved in planning the rally.

Still, helping to plan the rally that preceded the coup attempt does not itself constitute actively working to help coordinate a riot inside the Capitol building. For that, we turn to Rep. Mikie Sherrill (D-N.J.), who claimed Tuesday evening that she saw "members of Congress" leading "reconnaissance" tours of groups through the Capitol building on Jan. 5, one day before the coup attempt. She did not name any specific lawmakers in her allegation.

Sherrill's allegation is even more alarming in light of a small, but potentially massively consequential anecdote shared by Sarah Groh, chief of staff to Rep. Ayanna Pressley (Mass.).

Speaking with the Boston Globe this week, Groh said that she and the rest of the congresswoman's staff hunkered down in Pressley's office, barricaded the door, and looked for the gas masks and panic buttons that were stashed there. But "every panic button in my office had been torn out — the whole unit," Groh claimed. She added that she could think of no reason why the buttons — which she'd used in the past — would have been removed, and noted that she hadn't moved offices since using the buttons before.

And, in a fiery Instagram Live session on Tuesday evening, Pressley's fellow Squad member Rep. Alexandria Ocasio-Cortez (D-N.Y.) said she'd experienced "a pretty traumatizing event" during the coup attempt. "I had a very close encounter where I thought I was going to die," she said, offering few other details for "security reasons."

Alone, each anecdote is circumstantial at best. But in aggregate, the claims of all three lawmakers seem to suggest there is more to what happened during the insurrection than what has been made public already. The degree to which the MAGA-addled mob may have been encouraged, and even given material assistance, by sympathizers within Congress is one of the largest unanswered questions about the Trump coup attempt so far. It's possible some of those questions will never be resolved given — as AOC noted — the "security reasons" inherent in discussing violence at the Capitol. Still, when multiple Democratic officials speak up to point the public toward the same broad allegation, it seems worthwhile to pay attention — and start demanding some answers.

More like this
Trump's brilliant 2022 strategy is for Republicans to get into a messy intra-party fight
By Rafi Schwartz
Sure looks like Madison Cawthorn illegally snuck a tactical knife into a school
By Rafi Schwartz
Oops, the Arizona recount the MAGA crew demanded actually took votes away from Trump
By Rafi Schwartz
Stay up to date