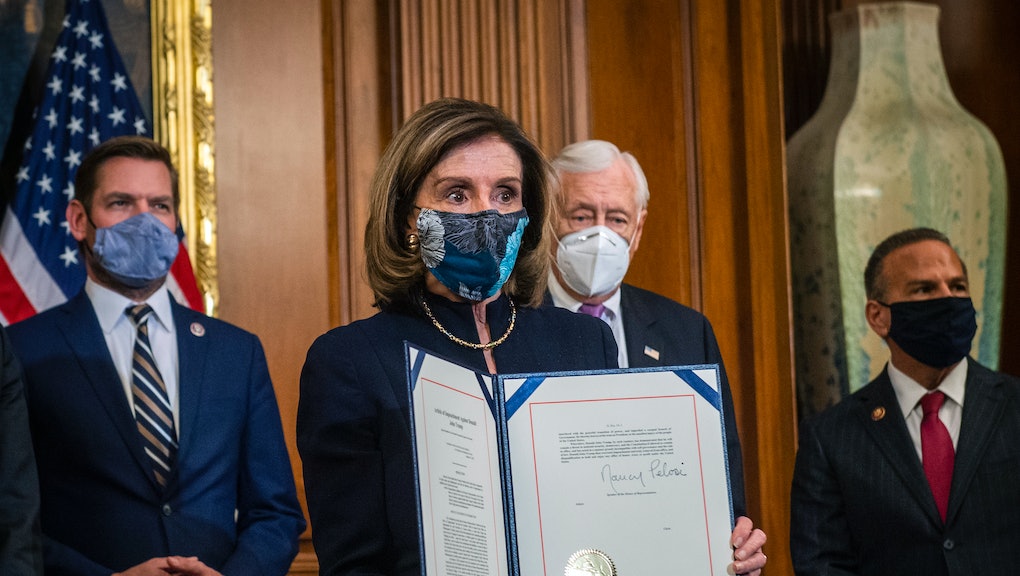 "Time," a certain disillusioned television detective once famously intoned, "is a flat circle." An equally disillusioned philosopher dubbed that same sentiment the "eternal return." Even the Bible reminds readers that "there is nothing new under the sun."

Whether you're faithful, philosophical, or simply enjoy prestige cable TV crime dramas, it's hard not to get an overwhelming sense of deja vu at the news that Monday will mark the start of Donald Trump's second impeachment trial in the Senate — just over one year to the day after the start of his first impeachment trail.

In a press release issued Friday afternoon, House Speaker Nancy Pelosi announced she would deliver the articles of impeachment passed on Jan. 13 by the House on Jan. 25 — this coming Monday — thereby triggering the historic second impeachment trail for the now ex-president.

"We are respectful of the Senate's constitutional power over the trial and always attentive to the fairness of the process, noting that the former president will have had the same amount of time to prepare for trial as our managers," Pelosi stated, acknowledging the incredible speed at which this whole process — from insurrection to bipartisan House vote for impeachment, to now — has taken place.

"Our managers are ready to begin to make their case to 100 Senate jurors through the trial process," she continued.

In addition to fruitless tries to abandon the impeachment altogether, Senate Republicans have been pushing to delay the start of the trial for as long as possible, with longtime Trump loyalist Sen. Lindsey Graham (S.C.) stating that "a couple of weeks, I think, would be necessary for the president's people to make their argument most effectively."

The speed at which the entire process has moved is impressive, given the House's vote to impeach came just one week after a mob of white nationalists, Proud Boys, QAnon adherents, and assorted other MAGA-cultists breached the halls of Congress in an attempted coup instigated by Trump himself. Given the normally glacial speed of legislative politics, the fact that this since moved to the Senate just over one week after that vote is equally astonishing.

Although the delivery of the articles of impeachment officially triggers the start of the trial, the exact schedule for testimony remains unclear, while the newly Democratic Senate majority works to clear President Biden's Cabinet nominees as quickly as possible. Biden himself suggested Friday that he might be willing to delay Trump's impeachment trial if in turn he receives swift confirmations to begin his presidency.