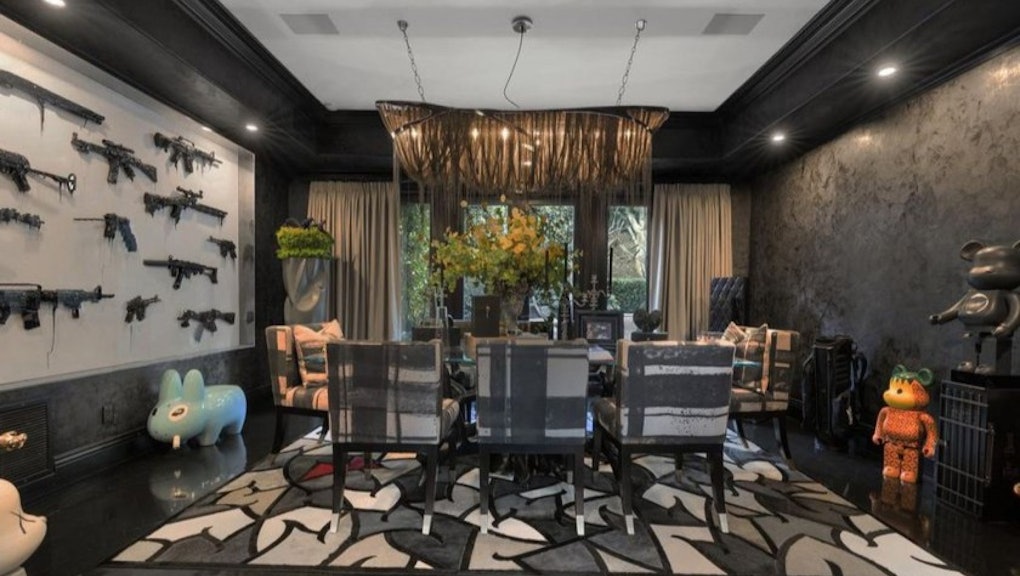 Dr. Phil's son has the most bizarrely decorated house in L.A.

Dr. Phil, whose real name is Phil McGraw, has been on American television for 16 years, and in that time, he’s given decently bad advice to hundreds of people in need of real health professionals. He’s amassed a sizable personal fortune doing so. $440 million to be exact. And with all that money, he has filled his home in Los Angeles with painfully tacky decor.

Based on a report from the Los Angeles Times, this horrendously decorated home, which is owned by Dr. Phil’s family trust, is now for sale for $5.75 million. According to the Times, Dr. Phil himself has actually never lived there, and that it is actually his son Jordan McGraw who has been occupying the residence.

This means that the dining room adorned with guns (according to a McGraw family representative is actually an “anti-gun art installation”), Kaws sculptures, and metal furniture isn’t actually the stylings of Dr. Phil, but his son. Dr. Phil has been known for giving parenting advice for most of the 21st century, and would surely have some questions for anyone else whose kid chose to put a neon sign that says “Hello There” in chicken scratch inside of their home.

There’s also a pool table that looks like it was inspired by the film adaptation of The Chronicles of Narnia, which sits in the same room as Batman and Joker figurines, and a photo of a pretty subpar sunset. It looks like someone took the contents of a Hot Topic and a Pier One Imports and mashed them together to create a franken-home.

“If you want your child to behave appropriately, you have to set the standards for the behaviors you want,” Dr. Phil wrote in a blog authored in 2004. Is this the behavior Dr. Phil wanted? A pop-art nightmare house in LA? “Figure out a way for them to get as much of what they want through appropriate behavior. There are a number of different currencies that can vary with your child's age. Once you understand what is valuable in your child's life, then you can mold and shape his or her behavior.”

Potential purchasers of the home will be allowed to keep these “one-of-a-kind finishes” in the 6,170-square-foot residence if they so desire. It seems unlikely there’s anyone else out there who desires Jordan Mcgraw’s very specific currency.

More like this
The 8 best reality shows you're not watching, but should be
By Brandon Yu
Steve from 'Blue's Clues' gave us the closure we didn't know we needed
By Kara Weisenstein
Lil Nas X's 'baby registry' proves trolling can be done with heart
By Brandon Yu
Stay up to date