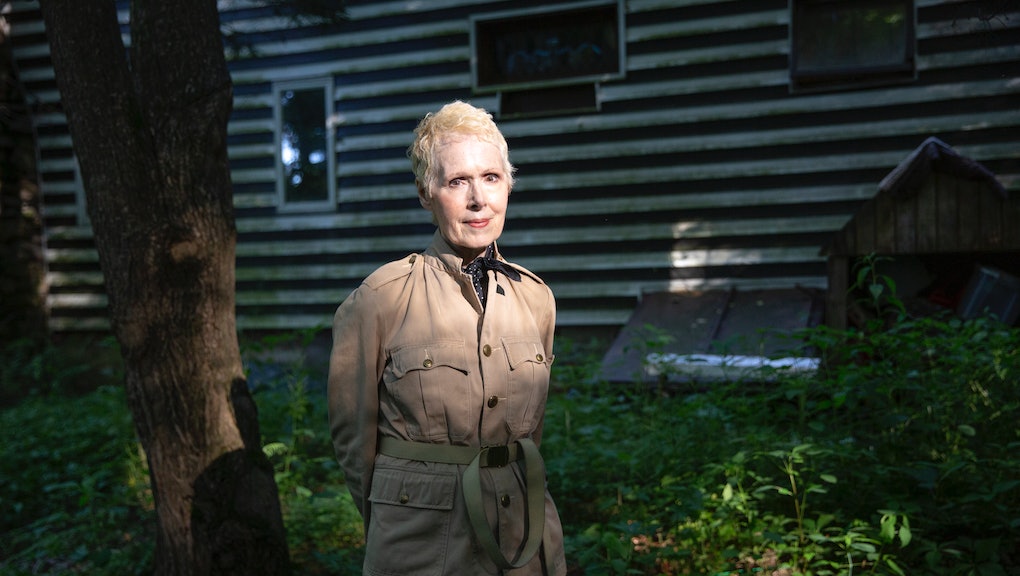 E. Jean Carroll sues Trump for saying she lied about her assault allegation

When longtime advice columnist E. Jean Carroll accused President Trump of rape on the cover of New York this summer, it was in an essay about the many "hideous men" she'd encountered in her life. Her allegation was shockingly blunt, as she detailed how Trump attacked her in the dressing room of a Bergdorf Goodman's in either late 1995 or early 1996, under the guise of needing her help to pick out a gift for a friend. The White House at the time called Carroll's claim "completely false and unrealistic," and Trump dismissed the accusation as "fake news," adding that he'd never met Carroll despite that fact that New York published a photo of the two of them together in the late '80s along with Carroll's allegation. Trump also later echoed a line of defense he'd used to parry previous accusations of assault, telling The Hill, "I'll say it with great respect ... she's not my type."

On Monday, just shy of six months after her story was published by New York, Carroll sued Trump over defamation of character, saying that his denials of the assault and his insinuation that she was lying amounted to defamation. In a statement provided to The Washington Post, Carroll said, "I am filing this on behalf of every woman who has ever been harassed, assaulted, silenced, or spoken up only to be shamed, fired, ridiculed, and belittled. No person in this country should be above the law — including the president."

In addition to calling Carroll's story "fake news" and insulting her looks, Trump had additionally attacked the fact that the New York story was based on a book excerpt, saying, "Shame on those who make up false stories of assault to try to get publicity for themselves, or sell a book," adding that Carroll's memoir "should be sold in the fiction section."

Carroll is seeking "unspecified compensatory and punitive damages," per the Post. White House Press Secretary Stephanie Grisham called Carroll a "fraud" in response to the lawsuit, saying, "Let me get this straight — Ms. Carroll is suing the president for defending himself against false allegations? I guess since the book did not make any money, she's trying to get paid another way."

Before Trump was elected president, nearly 20 women had credibly accused him of sexual misconduct. Trump denied every instance, often smearing the women in the process, and Carroll said that she had held off on telling her story in part because she'd seen how Trump attacked and threaten his accusers, until the #MeToo movement finally pushed her to do so.

Last month, authors of a separate book about Trump's alleged misconduct said in Esquire that they had uncovered 43 new allegations of misconduct by Trump.

More like this
Nearly half of Republicans believe absolute nonsense about Trump's Capitol coup
By Rafi Schwartz
Um, Biden's big immigration deal seems pretty similar to Trump's
By AJ Dellinger
John Cornyn is either incredibly dumb, incredibly craven, or incredibly both
By Rafi Schwartz
Stay up to date