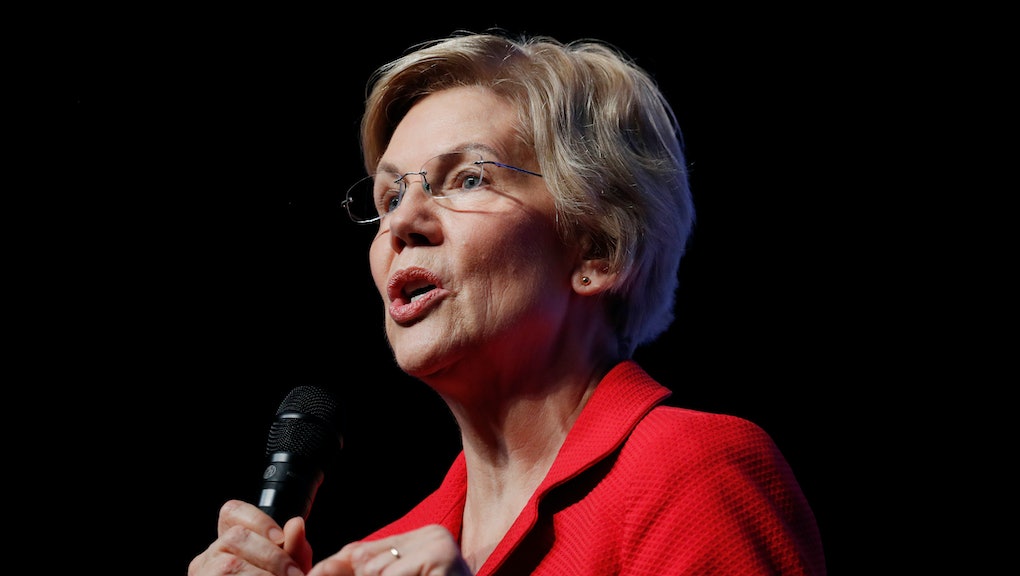 White nationalism in the United States has been a problem since the nation's inception. But the increasing number of violent acts explicitly linked to white nationalist ideology in recent years has newly given the issue mainstream political relevancy. On Tuesday, 2020 hopeful Elizabeth Warren announced her plan to combat white nationalism, and while it has key distinctions from the strategies other Democratic candidates have floated, there's still concern over how effective it will be.

When President Trump took office, many worried that his campaign rhetoric, which included attacks against immigrants and Muslims, would lead to increased hate crimes. In 2018, researchers found evidence to support the "Trump effect," and a later FBI report confirmed that violent personal attacks reached a 16-year high that year.

Warren says that the Trump administration has "chosen to ignore the threat posed by white nationalists," while Trump himself has "openly stoked these fires." Her plan to reverse the scourge can be broken down into a few key elements.

First, Warren will have the FBI and Department of Justice prioritize the investigation of white nationalist violence. In addition, the Massachusetts senator proposes stricter gun control, including preventing anyone convicted of a hate crime from owning a gun. She also advocates for increased action in schools "to recognize and prevent bias-motivated violence."

"When we fail to prosecute hate crimes, we send the message that the victims are less valued. And when our neighbors are being persecuted, or attacked, or treated unfairly, that impacts all of us," Warren wrote.

Notably, Warren did not call on utilizing the FBI's Countering Violent Extremism strategies, established under the Obama administration, as both California Sen. Kamala Harris and South Bend Mayor Pete Buttigieg have within their own proposals. These programs have been long-critiqued by organizers for focusing on the entrapment and surveillance of Muslim communities.

Unfortunately, Warren's calls to rely on the FBI and Department of Homeland Security (along with the Department of Justice) may not be much better. Warren did note that these agencies have historically prioritized "international terrorism", but she went on to claim that "domestic terrorism" has not received the same attention.

However, that's not true. Terrorism by itself is a loaded word and category that cannot be separated from politics. Within the United States, domestic terrorism doesn't always envelop white supremacists, like the shooter who killed 11 at the Tree of Life synagogue in Pittsburgh or the shooter in El Paso, Texas, who wrote a four-page racist manifesto.

“To deflect legitimate criticism of police tactics, to undermine a legitimate protest movement that has emerged in the past three years to protest police brutality, the FBI has tarred the dissenters as domestic terrorists, an organized group with a criminal ideology that are a threat to police officers," Andrew Cohen, a fellow at the Brennan Center for Justice, wrote.

Both DOJ and DHS have used the official "domestic terrorism" label as a category to target Muslims. Notably, DHS was responsible for rolling out CVE funding, including the first-ever grants in 2016 that totaled to $10 million per year. Nearly 80% of those grants went to organizations in Muslim communities, according to a report by the Brennan Center for Justice, further promoting surveillance of minorities.

For Warren's plan to work, the entire history of U.S. agencies like the FBI, DHS, and DOJ would have to be forgotten. She also calls for policing reform to re-establish trust between communities, but many advocates have linked the institution of policing back to white supremacy itself — including in its early formations as a way to control slaves.

On the surface, Warren's plan is a little better than that of other presidential candidates because she at least shies away from outright surveillance programming like CVE. But she still fails to truly account for how white supremacy is embedded within federal agencies. It ignores the history of domestic terrorism as an official categorization to punish minority communities and those who politically dissent. For a presidential candidate to truly acknowledge white nationalism and white supremacy within the United States, they would also have to be honest about the role that federal agencies have played.