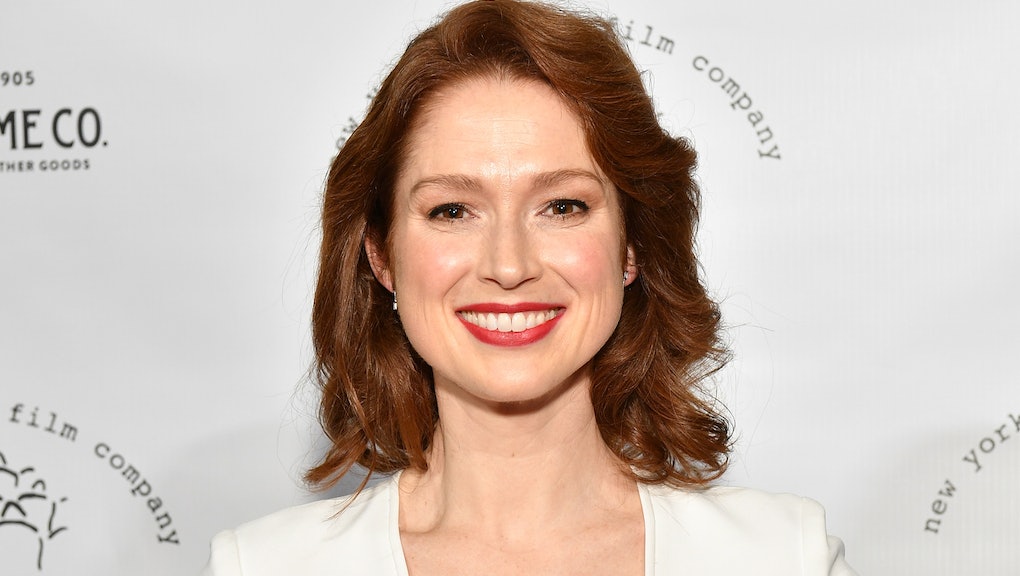 On Monday night, the internet was shocked to learn that Ellie Kemper was once crowned the queen of a debutante ball with racist origins. A newspaper clipping surfaced of the Unbreakable Kimmy Schmidt star at age 19, being fêted as the 105th Queen of Love and Beauty by the Veiled Prophets — a shadowy cabal of historically-white elites in St. Louis, Missouri, that was founded in the late 1800s. Before long, "KKK princess" and "Unbreakable KKKimmy Schmidt" were trending on Twitter.

Kemper's connection to the Veiled Prophet Ball (VP, for short) wasn't really a secret. When she joined fellow St. Louis natives Jenna Fischer and Phyllis Smith on The Office in 2009, the St. Louis Post Dispatch ran a story headlined: "From VP queen ...to The Office." It's been noted in Kemper's Wikipedia entry for years. I also grew up in St. Louis and live there now, and a few years ago, I did some research on how activist groups protested the Veiled Prophets in the 1970s. A librarian at the Missouri Historical Society clued me in to the Kemper connection back then: "You know, that gal from Unbreakable Kimmy Schmidt was a VP queen," I remember him saying with a knowing look.

I wasn't surprised by this information then and I'm still not — because Kemper comes from old money, and nearly all the offspring of rich, white families in St. Louis participate in the VP Ball. It's an antiquated, elitist tradition. But calling Kemper a white supremacist misses the more insidious point: that wealth, power and systemic racism are intrinsically linked in America. The existence of the Veiled Prophets enabled white businessmen to run St. Louis in their own interest for literally a century.

The Veiled Prophets aren't directly tied to the Ku Klux Klan, but racism and classism are integral to the group's history. The organization was founded in 1878 by Alonzo and Charles Slayback, brothers from New Orleans who'd fought for the Confederacy. A year prior, in 1877, white and Black railroad workers had united to strike for better working conditions and fair pay, but federal troops violently quelled the week-long protest, killing 18 strikers.

The original VP members, 14 prominent St. Louis businessmen, were likely aiming to put the working class in their place with a tangible manifestation of their power. They staged a grand parade and an opulent ball, presided over by an intimidating figure. An 1878 woodcut is the earliest image we have of the Veiled Prophet, in an all-white gown and pointed hat, with his face obscured by a mask, wielding a pistol and two shotguns. The KKK-adjacent imagery is hard to ignore, though the Klan didn't actually adopt its uniform of white robes and pointed hoods until 1915.

By the 20th century, the Veiled Prophets were mainly a social organization, much like a country club, known for their annual parade and debutante ball. Each year, one member was secretly chosen to play the Veiled Prophet, whose identity was masked with a literal veil. Members' daughters were often picked as the ball's Queen of Love and Beauty. Sure enough, if you browse the last names of past queens, it reads like a who's who of powerful St. Louis families. There's Busch, of Budweiser fame; Schnuck, behind a chain of grocery stores; Schlafly, another beer baron; Chouteau, a fur trader who co-founded St. Louis; Niedringhaus, an Industrial Revolution magnate. The list goes on and on. There's also Kemper, who is descended from a banker and railroad tycoon. Her grandmother's name adorns the oldest art museum West of the Mississippi River: the Mildred Lane Kemper Art Museum at Washington University in St. Louis.

Wealth was the primary qualification to join the Veiled Prophets, and members saw themselves as the custodians of the city. "It's a very thin slice of people, and yes, it's absolutely exclusionary," Dr. Thomas Spencer, historian and author of The St. Louis Veiled Prophet Celebration: Power on Parade, 1877-1995 told Mic. The same families who joined the group in its infancy held onto a monopoly of power in St. Louis for decades. "By the 1950’s and 1960’s, all the corporate CEOs in St. Louis had the same names as the major business leaders did in the 1880’s," Spencer told the Riverfront Times in 2000.

By the late 1960s and '70s, the VP Ball became the target of activists, like the social justice group ACTION (Action Council to Improve Opportunities for Negroes). They frequently picketed the debutante ball, calling it out for being racially exclusionary. Activists also criticized the Veiled Prophets for using city funds for their elitist fête. In 1972, members of ACTION infiltrated the VP Ball (with the help of some debutantes) and unmasked that year's Veiled Prophet as Tom K. Smith Jr., a vice president of Monsanto. Until 1969, the company manufactured the chemical Agent Orange, used on civilians during the Vietnam War.

The Veiled Prophets didn't include any Black members until 1979. But simply integrating a debutante ball was never really the point, Spencer explained. "What ACTION spent all of its time trying to convince people of was that this was about improving economic opportunities, especially for Black men," he told Mic. Their advocacy was about dismantling the power structures that ran St. Louis in the interest of its wealthy, white citizens — at the expense of the city's working class and Black populations. "The focus was that Black men should get the jobs at McDonnell Douglas. They should get the good jobs in the city. They should get access to the things white people had easy access to," Spencer pointed out. ACTION was making a statement about economic opportunity.

Eventually, the city of St. Louis distanced itself from the Veiled Prophets. Starting in 1981, the group had staged an annual 4th of July celebration called the VP Fair. In 1992, the name was quietly changed to Fair St. Louis. But the organization still exists, still parades its Veiled Prophet through the streets, still throws a yearly debutante ball, and is still composed of the city's richest families. It's a relic that helps explain the root of systemic inequality in St. Louis, but as Spencer put it bluntly: "I don't know what we're getting out of dragging this one debutante."

That's the thing that's complicated about the whole Kemper scandal: she's not responsible for the racist history of the Veiled Prophets. Is she complicit, as someone whose upbringing was "very privileged" (her words)? Yeah, but like the legions of other white women who participated in the VP Ball over the decades, she probably did it out of familial duty. "They're doing something for their father. I know it's easy for me to say it that way," Spencer told Mic.

Anyhow, labeling Kemper a "KKK Princess" is reductive. And more importantly, it distracts from the bigger conversation we ought to be having: how to dismantle the discriminatory power structures that've shaped our country for centuries. The truth is, the history of St. Louis — and America at large, really — is more complex than Twitter can handle.