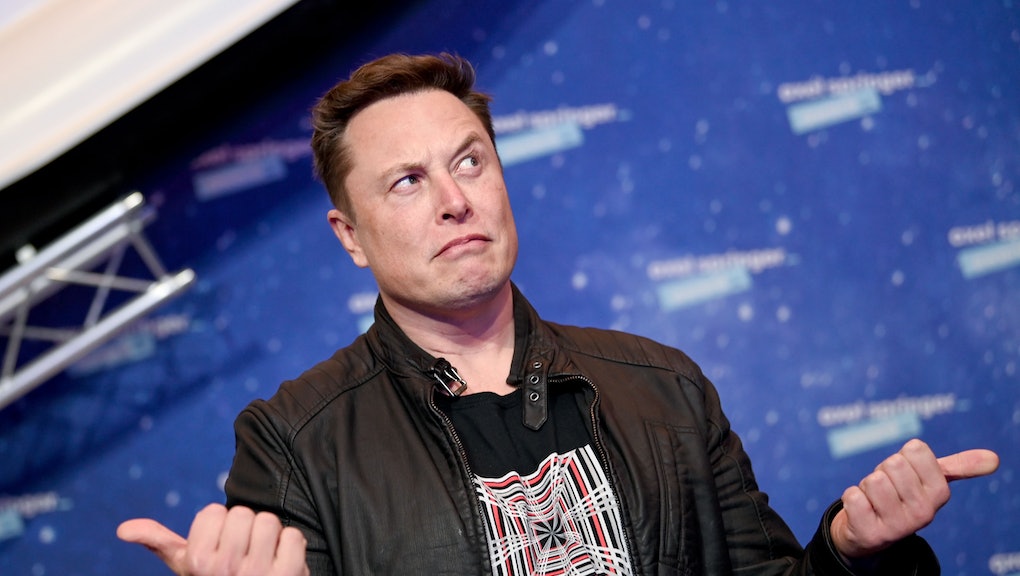 When Saturday Night Live announced last month that Elon Musk would host the May 8 show, reception was mixed — including from fan-favorite cast members like Aidy Bryant and Bowen Yang, who shared Instagram stories suggesting they were less than pleased with the news. But this isn't the first time SNL has featured a wealthy businessman as host. Donald Trump hosted in 2004, then made a second, more controversial appearance in 2015; and back in 1996, the Forbes Media CEO and then-presidential candidate Steve Forbes hosted. So, while some people may not be thrilled with the Tesla and SpaceX mogul’s SNL involvement, his hosting gig didn’t come out of nowhere — and it’s even less unexpected when you consider Musk’s previous dabblings in satire.

On March 14, 2018, Musk tweeted “Thud!” Hours later, he followed up: “That’s the name of my new intergalactic media empire, exclamation point optional.” At first, it was unclear if he was serious, butThe Daily Beast clarified with an exclusive: Former Onion editors Ben Berkley and Cole Bolton had been working in Los Angeles on a secret project funded by one of the richest men in the world. At the time, Musk told the Daily Beast, “It’s pretty obvious that comedy is the next frontier after electric vehicles, space exploration, and brain-computer interfaces. Don’t know how anyone’s not seeing this.”

Musk was such a big fan of The Onion’s wit that he had previously dubbed it “the greatest publication in the history of all conscious beings, living or dead.” He even once expressed interest in buying the website, according to The Daily Beast. Instead, he co-founded Thud with Berkley and Bolton, who had reportedly left The Onion due to creative differences with the site’s new owners, Univision, in 2017. This arrangement, at the intersection of two precarious industries — media and comedy — appeared to be a dream come true. According to The Verge, Musk offered about $2 million in funding, allowing the former Onion leaders to hire a staff and imagine ambitious projects that would never have been possible within the boundaries of a traditional media company.

Nine of the 13 new Thud staffers were Onion alumni, but the budding start-up wasn’t going to play it safe and make another news-satire site — instead, the “intergalactic media empire” aimed to create immersive satirical experiences that blurred the lines between reality and parody. As Thud’s Head of Design Jenny Nellis wrote on her portfolio website about the now-defunct project, “How the hell do you brand something that is the first and possibly the last of its kind, while working with an eccentric billionaire?” (Mic reached out to all 13 of the company’s former employees to comment on Musk’s SNL gig, but all of them either declined to comment or didn’t answer our requests.)

Ultimately, Thud created several satirical websites, most of which remain online as an unconventional (and perhaps unintentional) time capsule. There’s DNA Friend, a website that traces your ancestry by taking webcam photos of your mouth; TacStorm, a gun that never stops firing; Ploog, a universal orifice adapter; and Mampfen, a satirical guide to L.A. restaurants. These projects bled into the real world: Mampfen published an actual, physical dining guide; and Spitty, a human-sized spit droplet, danced around New York City to promote DNA Friend.

Thud's projects were like optical illusions — the websites’ sleek designs are familiar, yet strange enough to elicit a sense that something’s wrong. In a way, this model foreshadowed the company’s unfortunate fate. It had the money and talent necessary to succeed, but two years later, Thud’s existence feels like a collective fever dream. So where did Thud go wrong?

The company had big plans, teasing projects like a museum installation that would chronicle the British conquest of Heaven, poking fun at the nation’s long colonialist history. But none of these expansive installations came to fruition, and the only remains we have of Thud are these fake product websites, a kind of digital graveyard. Thud didn’t even have a centralized homepage where fans could keep up with new projects; it simply wasn’t set up to retain an audience, make a profit, or sustain itself, likely because it didn’t really need to — until Musk pulled funding, that is. By the time Thud launched publicly in March 2019, Musk had already backed out of the project. He had contributed initial funding but didn’t require his colleagues to have a business plan, The Verge reported, so they seemingly didn’t create one. When you have the ultra-rich SpaceX founder in your pocket, why go fishing for subscriptions like a public radio station?

But once he was already in too deep — with 13 employees working to break new ground in satirical media — Musk feared Thud’s work might be weaponized against Tesla and SpaceX, so he sold it to his co-founders. That didn’t bode well for the future of the company. As Bolton told The Verge when Thud folded in 2019, “Making a swift transition from being a billionaire-backed project to an independent media company is... You know.”

But beyond these very understandable hurdles, the projects Thud created just weren’t funny enough to develop an audience as devoted as The Onion’s. To be fair, cracking jokes probably isn’t easy when your billionaire investor backs out months before launch. But while Thud’s websites did succeed in creating new realities, they weren’t worlds that were fun to exist in. DNA Friend mocks the popularity of products like 23andMe and Ancestry (“We only share your data with third parties who explicitly request it or who seem like they’d be pleased if it appeared in front of them”), yet some of the humor leaves — spit pun not intended — a bad taste in your mouth (“DNA Friend offers to eliminate any unwanted ethnic heritage from your genetic profile for just $40 per percentage point”). TacStorm, the continually firing gun, satirizes the lack of American gun control — yet the fake commercial behind the fake product is more depressing than funny or thought-provoking. The best satire inspires us to consider things from a different perspective, but these projects failed to live up to the hype of an Elon Musk-funded ex-Onion powerhouse.

Thud began with a bang and ended with a whimper.. Perhaps the remains of Thud’s website say it all: “Thud was a short-lived comedy company. It was very aptly named.”

Maybe Musk will nod to his ill-fated satirical ventures in his opening SNL monologue, but in the meantime, I’m still trying to make sense of the Ploog.