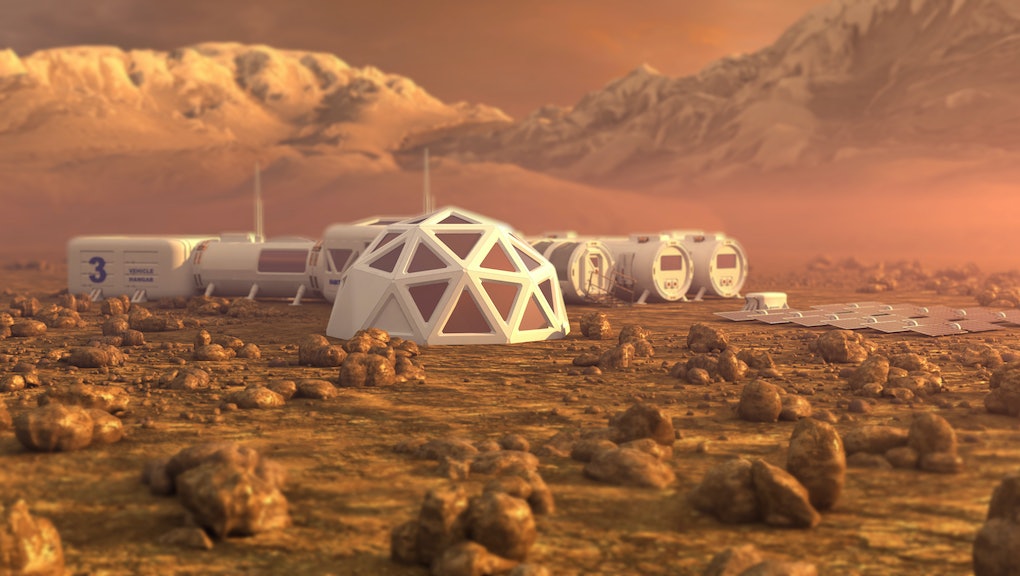 Elon Musk has not given up on his dream of colonizing Mars. In fact, it seems like he's been giving it an awful lot of thought. In a series of responses to fans on Twitter, the SpaceX CEO laid out some of the logistics required to set up shop on the Martian planet, and it seems like quite the undertaking to pull off.

Musk's calculations on what it would take to get to Mars comes shortly after an appearance at a U.S. Air Force startup pitch day event where Musk claimed that each Starship flight will only cost about $2 million — meaning the Mars colonization process will rack up a bill of about $2 billion just to sending the rockets off to Mars. Those trips will have to take place over the course of about 20 years because, as Musk noted, the planets only align once every two years to actually facilitate the trips. The Starships will be essential to the whole process because of their affordability, as well as their capacity for cargo and the fact they are designed to be reusable. Musk believes that if his company ramps up production on the Starship rockets, it will be able to launch as much as 10 million tons of payload into orbit each year — a massive increase from the current global payload orbit capacity of about 500 tons per year. Current space operations don't really require that type of payload capacity, but for setting up an entire city on Mars, well, you're going to need to be able to carry an awful lot of cargo.

And then there's the task of getting people to Mars. In 2017, Musk said that he had his sights set on 2024 for the first crewed flight to Mars. That date, like many of Musk's plans, is probably a bit too ambitious. Before getting to another planet, SpaceX will have to get to the Moon first. For any mission to Mars, the Moon will serve as a sort of launch pad — a short jump from Earth before the big jump to the Red Planet. Musk has been imagining what he calls "Moon Base Alpha" for a few years now, going so far as to post computer-rendered images of the theoretical moon base that will serve as the launch point for missions to Mars. Musk has said that he hopes to have the Moon base set up by 2022, which is a good two years ahead of NASA's own timeline to get back to the Moon for the first time since 1972. NASA's goals are similar to SpaceX's — it wants to set up a gateway to the rest of space on the Moon, something capable of launching missions and supporting habitation for an extended period if necessary. It is just operating on a slightly less ambitious schedule, though probably a more realistic one.

Here's the thing about Musk's plans to get to Mars: while he is entirely gung-ho about the process and is more than happy to talk up his company's capabilities of making it happen, he's much better at building hype than he is at building timelines. Musk has, at various points, suggested dates for the Mars mission that now seem unlikely to happen. In 2018, Musk suggested that his “Mars Base Alpha” concept — a livable environment on the surface of Mars — would be made a reality by 2028. As recently as 2017, Musk was suggesting that SpaceX's first cargo missions to Mars would land on the planet by 2022. The company has previously targeted 2018 and 2020 for initial cargo launches, as well. While at his most aspirational, Musk has suggested that his company will help facilitate the transportation of as many as one million people to Mars — a process that he estimated will take between 40 and 100 years.

Space travel is an extremely complicated process that requires precise conditions and timing to execute, so shifting timelines are part of the process and to be expected. That said, Musk is not always the most reliable narrator for these things. He's made a habit, both at SpaceX and Tesla, of over-promising and under-delivering. Here's a safe bet: SpaceX will get to the Moon eventually. It will get to Mars eventually. It will set up a colony on that planet eventually. In the meantime, the planet we are on is in dire need of attention, lest we raise the surface temperature of the planet to unsustainable and likely devastating levels. Setting up shop on Mars is a wonderful ambition, but it's not a viable plan B to Earth, even on Musk's unlikely timelines.