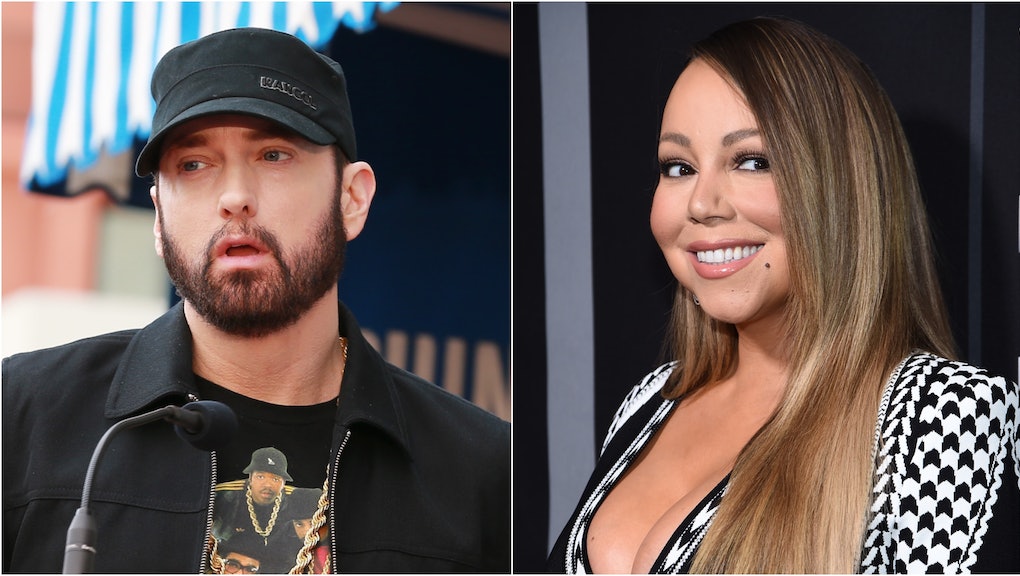 Mariah Carey is getting ready to spill all the juicy details of her long-rumored fling with Eminem in her forthcoming memoir, and apparently the rapper is shaking in his Air Jordans. What really happened between the songstress and the rapper, whose real name is Marshall Mathers, in the early aughts has been shrouded in drama and mystery for decades. But Mimi seems ready to set the record straight on their relationship, and her book seems bound to paint Slim Shady in a pretty negative light.

“Eminem’s Achilles heel has always been Mariah Carey. They had a very toxic relationship,” an insider told Us Weekly. “He knows that Mariah is going to say very negative things about him. He is expecting the onslaught, and almost welcomes it.”

There’s so much to dissect about this statement, like the subtle masochism evident in the assertion Eminem “welcomes” the impending “onslaught.” It’s like he knows he’s been an insufferable misogynist his entire career and is ready to atone. Interesting.

Us Weekly’s source continued: “Marshall is stressed out that Mariah is going to say s–t that he was bad in bed or a selfish lover, because he has always been very insecure about that. She knows that.” Hmm, a man who boasts about his sexual conquests in song turns out not to be a very capable lover? Nobody saw that coming.

Let me take you down a wormhole of pop culture drama for a sec: throughout the early 2000s, Eminem and Carey were locked in a snarky tête-à-tête over whether anything happened between them. The rapper said they’d been an item; the songstress denied it. But things came to a head when Carey married Nick Cannon in 2009, and Eminem dropped "Bagpipes from Baghdad," which dragged the newlyweds. "Mariah, whatever happened to us?/Why did we have to break up?" Eminem rapped. "Nick, you had your fun/I've come to kick you in your sack of junk,” he quips later in the song.

The same year, Carey dropped her masterful diss track “Obsessed.” She claimed the single wasn’t about Eminem specifically, but the singer famously dressed in drag as a Slim Shady lookalike for the music video. Then the rapper retaliated with his song, “The Warning,” referring to Carey with a slew of derogatory terms and going into full detail about an alleged sexual encounter between them. Eminem shows off his petty side in the track intro: "Only reason I dissed you in the first place is because you denied seeing me. Now I'm pissed off," he says before launching into the rap.

A whole decade passed. Carey and Cannon split up in 2014. But Eminem just couldn’t let the past lie. In a verse on Fat Joe's 2019 track "Lord Above" (also featuring Mary J. Blige), the rapper took aim at Carey once again. "I know me and Mariah didn't end on a high note," Eminem raps, later adding: "But that other dude's whipped… that pussy's got him neutered/Tried to tell him this chick's a nut job before he got his jewels clipped/Almost got my caboose kicked/Fool, quit/You not gonna do shit/I let her chop my balls off, too, before I lose to you, Nick."

Evidently, MC has had quite enough of Eminem’s shenanigans, and she’s putting the matter to bed definitively. Her memoir, The Meaning of Mariah Carey, drops on September 29 and is filled with “my memories, my mishaps, my struggles, my survival, and my songs,” Carey wrote on social media announcing her book. “Writing this memoir was incredibly hard, humbling and healing. My sincere hope is that you are moved to a new understanding, not only about me but also about the resilience of the human spirit.”

The audiobook version of The Meaning of Mariah Carey, produced by Audible and out the same day, sounds even better than the written version. Carey is performing the audiobook herself, which will weave musical moments throughout her life story. Notably, this year marks the 30th anniversary of the release of Carey’s self-titled debut album, which launched her to superstardom.