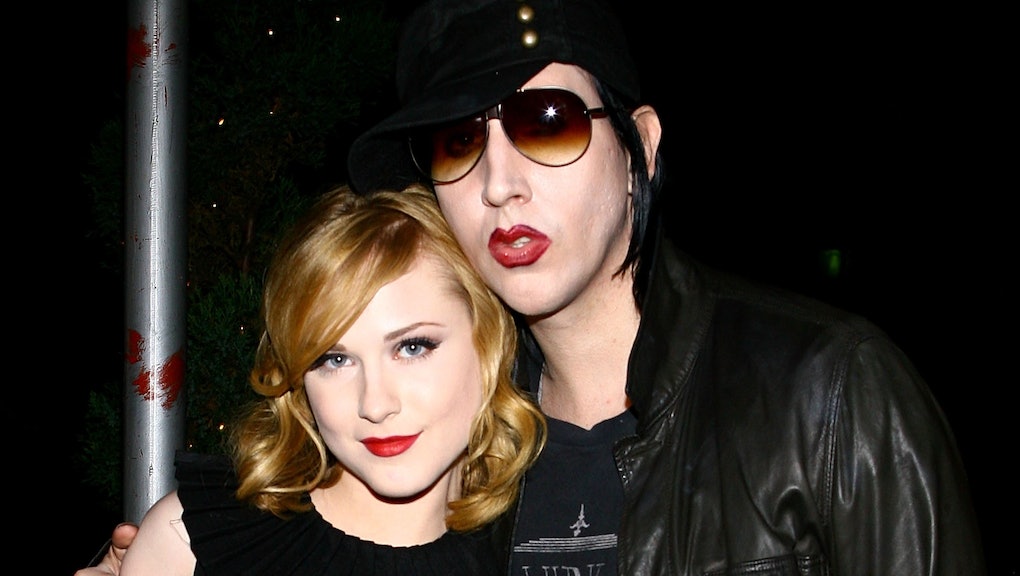 Manson has been removed from Starz's American Gods and Shudder's Creepshow.

He responded to the allegations in a statement posted on Instagram: "Obviously, my art and my life have long been magnets for controversy, but these recent claims about me are horrible distortions of reality. My intimate relationships have always been entirely consensual with like-minded partners. Regardless of how — and why — others are now choosing to misrepresent the past, that is the truth."

Update Feb. 1: In light of these allegations, Marilyn Manson has been dropped from Loma Vista Recordings, which released Manson’s last three albums. The company announced it will also "cease to further promote his current album, effective immediately." Our original story appears below.

In the last few years, Evan Rachel Wood has become a trailblazing domestic violence activist. In 2019, she spearheaded legislation to extend California’s statute of limitations for how long victims have to press charges against an abuser. Gov. Gavin Newsom (D) signed it into law that year. Though she’s been transparent about the harrowing abuse she suffered at the hands of an ex, Wood never explicitly named her abuser — until Monday, when she issued a statement letting everyone know she’s been talking about Marilyn Manson.

“The name of my abuser is Brian Warner, also known to the world as Marilyn Manson,” Wood wrote in an Instagram post. “He started grooming me when I was a teenager and horrifically abused me for years.” The couple went public in 2007, when she was 19 and he was 38. They were engaged in 2010 before splitting later that year.

“I was brainwashed and manipulated into submission,” Wood’s statement continued. “I am done living in fear of retaliation, slander, or blackmail. I am here to expose this dangerous man and call out the many industries that have enabled him, before he ruins any more lives. I stand with the many victims who will no longer be silent.”

Wood’s allegations have triggered an avalanche of other awful stories about the goth rocker from those who say he also abused them. At least four women have detailed their own accounts of sexual assault, psychological abuse, gaslighting, violence, and manipulation on Instagram:

“As we all struggled, as survivors do, to get on with our lives, I’d keep hearing stories disturbingly similar to our own experiences,” wrote photographer Ashley Walters, who said Manson reached out to her in 2010.

“I was emotionally abused, terrorized and scarred. I was locked in rooms when I was ‘bad,’ sometimes forced to listen to him entertaining other women,” said model Sarah McNeilly.

“The first thing that he ever said to me was that he was ‘going to bite me,’” wrote Gabriella, an artist known as @sourgirrrl. “The second time we met he broke a wine glass in the hotel room and demanded we make a blood pact together. He cut both of our hands with the broken glass.” She said they met in 2015, when she was 22 and he was 46.

“I still feel the affects [sic] everyday. I have night terrors, PTSD, anxiety, and mostly crippling OCD. I try to wash constantly to get him out or off of me,” said Ashley Lindsay Morgan, who noted she met Manson while modeling in Bangkok, Thailand.

Though she didn’t name Manson at the time, Wood wrote an op-ed for Mic about surviving domestic violence in 2019, while lobbying the California Senate to pass the Phoenix Act. “When I was a teenager, I met a man. He was older. He was well-established, and he drew me in,” she wrote. “Soon, I had surrendered my agency, only to realize later that this was part of ‘the grooming process.’ It would be years until I understood what had happened. After multiple attempts to leave, I finally escaped, leaving behind death threats, starvation, brainwashing, rape, torture, deep humiliation, and shame.”

Journalists and the public had begun to piece together the timeline of Wood’s experiences before she named Manson as her abuser. He publicly said some disturbing stuff about her while they were dating, too, which Glamour unearthed in a 2018 article headlined, “Why Is Nobody Talking About Marilyn Manson’s ‘Fantasy’ of Killing Evan Rachel Wood?” The piece highlighted a 2009 interview where Manson said about Wood: “I have fantasies every day about smashing her skull in with a sledgehammer.”

More recently, Manson hung up on a journalist for music publication Metal Hammer when he mentioned Wood’s name. Then his team issued a lengthy statement on his behalf denying any culpability.