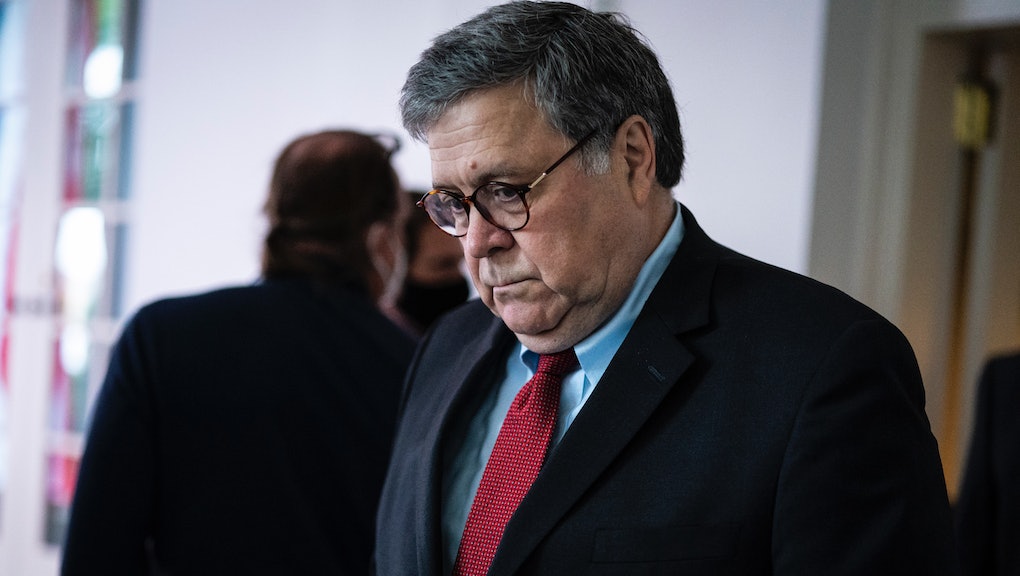 Long before Election Day, President Trump laid the groundwork to question the legitimacy of any results that were not in his favor. In November, Americans watched as Trump put those plans into action with calls to stop the ballot-counting, numerous lawsuits, and claims of fraud. But now, even loyal Attorney General Bill Barr has admitted there's no evidence of widespread voter fraud, putting yet another nail in Trump's political coffin.

A key part of Trump's strategy around disputing elections included attacking mail-in voting. This meant not only sabotaging the United States Postal Service but also claiming that the entire process was "corrupt" despite having voted by mail himself. Although Trump made his claims with no evidence whatsoever, he still had the support of his appointees and other Republican lawmakers, which gave his accusations the illusion of legitimacy.

This was seen last month when Barr gave U.S. attorneys the go-ahead to "pursue substantial allegations of voter fraud" — despite there being absolutely no evidence that valid allegations really exist. On Tuesday, however, the jig was finally up. In an interview with the Associated Press, Barr said, "To date, we have not seen fraud on a scale that could have effected a different outcome in the election."

Trump has not responded directly to Barr. However, his personal attorney Rudy Giuliani, who has been out and about making some wild appearances to further Trump's baseless shtick, told AP in a statement that "with all due respect to the attorney general, there hasn't been any semblance" of an investigation.

Overall, Barr's comments are the absolute minimum. But they're notable because he and the Department of Justice have pretty much unquestionably stood by Trump for months. Barr was part of the campaign against mail-in voting, and not only did the DOJ go against long-standing policies when it said armed agents could be sent to investigate voter fraud, it also tried to step in to help Trump with his personal legal troubles, like the lawsuit against him from E. Jean Carroll, who accused the president of rape. (Trump denied the accusation, prompting Carroll to sue for defamation because he implied she lied about the assault.)

In response to Barr's comments, Senate Minority Leader Chuck Schumer (D-N.Y.) quipped, "I guess he's the next one to be fired." His statement draws from the fact that last month, Trump fired Christopher Krebs, then the head of the Cybersecurity and Infrastructure Security Agency within the Department of Homeland Security, after the CISA released statement refuting Trump's claims of fraud. The agency referred to the elections as "the most secure in American history."

Even though Trump has lost one public-facing ally in his pursuit to overturn the elections, he's unlikely to stop making unfounded claims. After all, it's easier to point fingers than to reckon with the election as a loss. Of course, there could be a third explanation for Trump's downfall: In a Fox News interview Tuesday, Trump's former campaign manager Brad Parscale said Trump would have won the election if he could have just been "publicly empathetic" toward coronavirus victims and their loved ones.