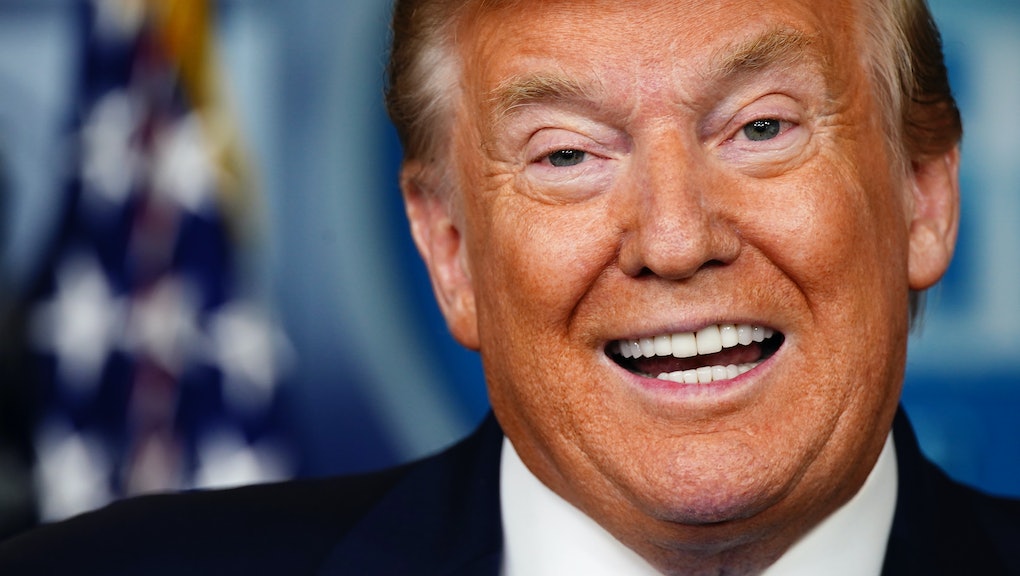 Trump says mail-in voting is fine for him, but for everyone else it's "corrupt"

At some point over the past month or so, President Trump's nightly coronavirus press briefings morphed into what could charitably be called the cursed polar opposite of Franklin Delano Roosevelt's iconic "fireside chats." But where the 32nd president used his broadcasts to help explain policy and reassure an anxious nation, Trump has turned his nightly appearances into a platform for raging at enemies, passing the buck, and playing the ever-put-upon victim.

It's no surprise then that the president used his Tuesday evening press conference to make clear the newest manifestation of his longtime voter suppression efforts: mail-in voting. Specifically, he said that it's very bad for everyone, except for him.

Calling it "horrible" and "corrupt," Trump insisted that mail-in voting — a process used for all elections in five states already, not to mention across the diplomatic corps and U.S. military — was somehow totally fine when he did it recently because, as he put it, "I'm allowed to."

Well in that case!

Trump's "mail in voting for me, but not for thee" boast came the same day voters in Wisconsin risked their health to cast ballots in that state's primary election, after Republican lawmakers in the Badger State — and eventually the conservative majority on the U.S. Supreme Court — blocked Democratic Gov. Tony Evers's efforts to delay the election and expand remote voting access during the coronavirus pandemic.

At its core, Trump's anti-mail-in push is part of a broader Republican effort to restrict access to voting for as many people as possible, all while claiming their roadblocks are simply being done in the interest of "election security" — regardless of the fact that wide-scale voter fraud is virtually non-existent.

The president continued to rail against mail-in voting Wednesday morning, tweeting that "for whatever reason, [it] doesn’t work out well for Republicans" — which is true, when you consider that when more people vote, Democrats tend to reap the benefits. But that has less (read: nothing) to do with "fraud" and everything to do with the fact that Republicans have spent the past few decades gaming the electoral system because it's the primary way they can win elections.

At this point, it's entirely unclear whether coronavirus will be active enough come November to have an impact on the general election. At the least, it's already disrupted several primaries. But if Tuesday's press briefing is any indication, Trump and his allies are already laying the groundwork to make it more difficult to both shelter in place, and vote against him.

More like this
There are already 19 QAnon candidates running for Congress in 2022
By Rafi Schwartz
This anti-vaxx doctor is seriously telling lawmakers vaccinated people are "magnetized"
By Tracey Anne Duncan
Donald Trump, king of scams, says Bitcoin is a scam
By Rafi Schwartz
Stay up to date