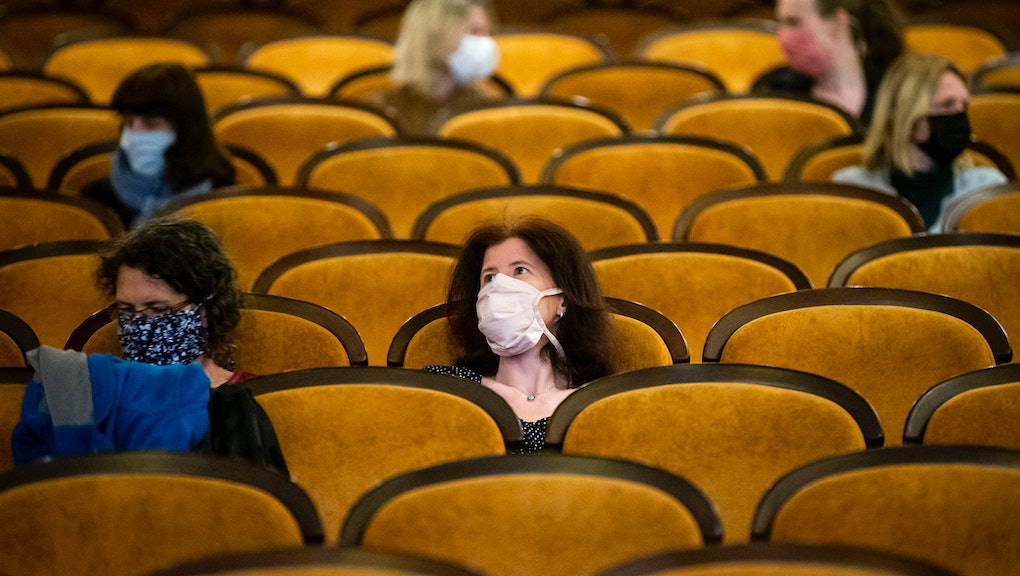 Even filmmakers don't want you to go to movie theaters yet

Going to the movies is one of the communal cultural experiences I miss most in pandemic times. Remember how fun it was to spontaneously pop into your neighborhood cinema and get lost in a story for a few hours with dozens of strangers? Filmmakers yearn to see their work on the big screen as much as we do. But lots are discouraging audiences from going to the movies just yet, even as the languishing film industry does everything in its power to entice people inside again.

Coronavirus has obviously been rough on the film industry, especially movie theaters. Cinemas across the U.S. were shuttered for many months during the lockdown and lots, in major markets like New York and California, haven’t reopened yet. Some theaters are now operating at sharply reduced capacity; many have pumped tens of thousands of dollars into safety measures, like improved air filtration systems, to get audiences to return.

Distributors hoped the exclusive theatrical release of Tenet over Labor Day weekend would entice consumers back to cinemas, but even Christopher Nolan’s time-bending blockbuster couldn’t outstrip audiences’ wariness about whether it’s really safe to see a movie indoors. Not to mention, people have gotten used to streaming new movies from the socially-distanced comfort of their homes, even if they have to pay a premium. With the glut of content already available on Netflix and the like, it’s not hard to imagine most people reasoning they’d rather wait a few weeks to watch a new film than risk contracting COVID-19 in a theater.

Turns out, a lot of filmmakers readily agree with this line of rational thinking. News of major movie releases getting pushed back, like Wonder Woman 1984 from early October to late December, breaks every week. Just yesterday, Disney delayed it’s highly-anticipated films Black Widow and West Side Story to 2021.

According to The Hollywood Reporter, producer Jordan Peele influenced the decision to delay the thriller Candyman from this October to next year, largely because he didn’t want to encourage fans to gather in theaters before it was safe. "More and more filmmakers are having these conversations," one anonymous studio executive told THR. "There's just so much confusion. And there's a spectrum in terms of comfort level."

Lots of filmmakers less powerful than Peele don’t have as much say in how their movie reaches viewers. And despite so many delayed films, there are still tons of buzzy movies slated for release this fall. The filmmakers behind the indie flick Synchronic went so far as to discourage fans from seeing their film indoors when it premieres in October.

"Due to distribution arrangements that are out of our control, the release of Synchronic into drive-ins and indoor theaters has been confirmed for October 23rd. But we want to be very clear: at the time of writing this, we personally wouldn't go to an indoor movie theater, so we can't encourage you to. To us, this isn't only about feeling safe in a theater, this is also about the scientific community indicating that enclosed spaces like movie theaters are still a hazard for spreading COVID-19 to others," the filmmakers wrote on Instagram on September 11.

Even countries in Europe, where people experienced a pretty normal summer, are bracing for another spike in coronavirus outbreaks as the weather gets colder. Here in America, where we never flattened the curve, scientists predict the COVID-19 death toll could double to 400,000 people before the end of 2020 — as though 200,000 coronavirus deaths wasn’t horrific enough.

It’s clear that to save lives, we need to stay home. In fact, Americans probably need to be more antisocial going forward than most have been lately. That likely means avoiding the movies too, even though it totally sucks. For example, as much as I want to tell you to go see Miranda July’s new film Kajillionaire when it hits theaters tomorrow, I’d also counsel you to wait till it hits streaming three weeks from now on October 16.