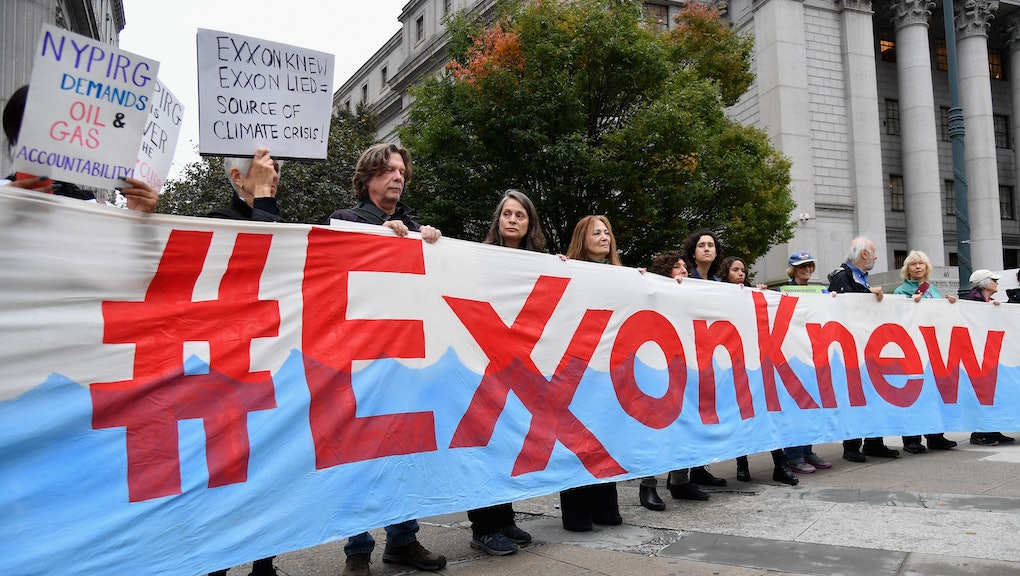 Carbon capture technology, the ability to actually remove carbon from the atmosphere, may be a key tool in the fight against climate change. ExxonMobil, one of the driving forces of our ongoing fossil fuel addiction, was recently on the verge of becoming a leader in the new field with the creation of one of the world's largest carbon capture storage facilities. But instead of moving forward with the plan, Bloomberg reports Exxon has decided to shelve the project indefinitely and instead focus on expanding its already massive portfolio of oil and gas projects.

Exxon's plan to get into the carbon capture game was an ambitious one. The company was set to construct a massive building in southern Wyoming that would store captured emissions from the nearby LaBarge natural gas field. The idea behind the facility at LaBarge was simple: Exxon would extract the natural gas and carbon dioxide, separate the carbon, and sequester it in the new structure.The plan would have essentially turned the LaBarge gas field into a carbon-neutral operation for Exxon. It also would have been one of the highest profile and largest examples of carbon capture in action. According to the Global CCS Institute, there are 26 noteworthy active carbon capture projects. Combine all of the storage capacity of those facilities, which can sequester more than 38 million metric tons of carbon emissions per year, and there is enough room to capture about 0.1 percent of all global emissions, according to the International Energy Agency. It is estimated that we would have to expand carbon capture facilities by 100 to 200 times the current capacity in order to reach net-zero emissions by 2050.

Exxon's planned LaBarge facility could have served as one of the best examples of the promise of carbon capture. The company expected that it would cost them about $260 million to construct the structure, accounting for one percent of its total capital budget for 2020, according to Bloomberg. It also reportedly would have made up nearly 20 percent of the company's planned emission reduction efforts over the next five years. Construction was set to begin this summer. Then the coronavirus pandemic hit and Exxon, along with other oil companies, was hit hard. As oil prices plummeted to record lows, the company announced it was pausing the carbon capture facility indefinitely.

An Exxon spokesperson told Bloomberg that the LaBarge project “remains in our capital plans, and the permitting process and necessary design work continue,” and said spending cuts “have impacted projects across all business lines.” But the company has opted to push forward with its more traditional fossil fuel projects, including oil and drilling operations. In September, the company announced that it will expand offshore drilling operations off the coast of Guyana. That project will cost $9 billion, or about 35 times the cost of the shelved carbon capture initiative. Mic reached out to Exxon Mobil for comment but did not receive a response at the time of publication.

While the contrasting projects starkly show where Exxon's priorities are, it shouldn't come as much of a surprise. Earlier this year, it was reported that Exxon plans to increase its annual emissions by as much as 17 percent over the next five years, adding 21 million metric tons of carbon dioxide to the atmosphere each year. That comes as other fossil fuel companies are committing to reducing their emissions.

What perhaps makes this odd is the fact that Exxon continues upon its destructive path despite evidence suggesting that it is not great for its bottom line. The company's value has been on the decline, and it has become the target of investors who want to push the company toward a greener future. Yet, like one of its own oil tankers, it is proving difficult to actually turn the company around. Then again, Exxon is the same company that knew human-caused climate change was happening well before it became public knowledge and chose to do and say nothing to stop it. So perhaps it shouldn't come as a surprise that the same company would rather keep doing things its own way despite a wealth of evidence that it isn't working.