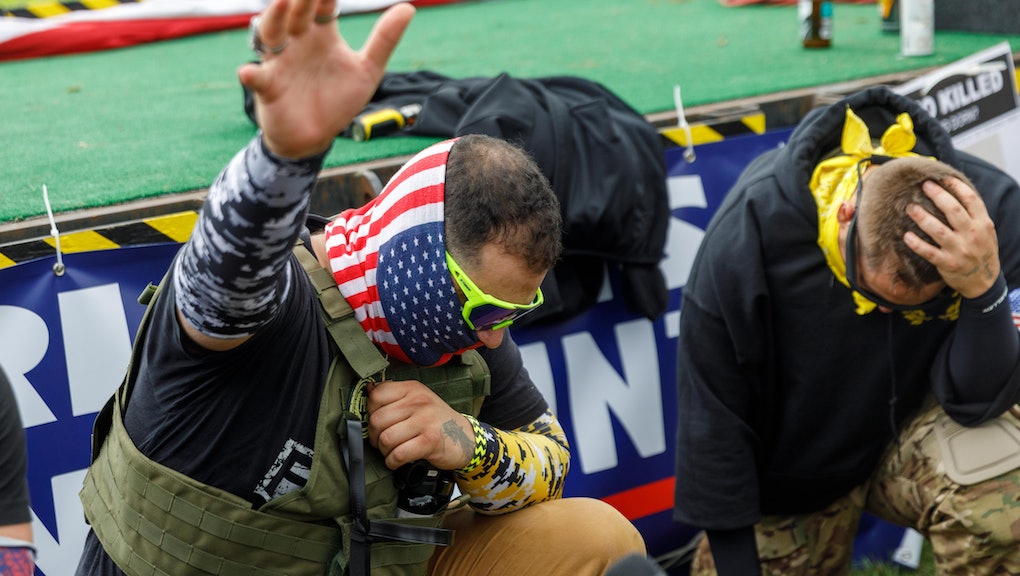 Facebook and Twitter tried to stop Trump's false claim of victory, but far-right groups already got the message

As was expected, and dreaded, we still do not know who won the 2020 presidential election. Donald Trump has apparently seen enough to make the call, though. In the early hours of November 4, with millions of ballots yet to be counted, President Trump tweeted, "We are up BIG, but they are trying to STEAL the Election."

Since that tweet, which he followed with an early morning televised declaration of victory despite no evidence to support the claim, Trump has fired off message after message implying the election is being taken away from him through illegitimate means. It has sent the social media moderation team into overdrive, working to review each tweet and determine if it needs to be flagged for misinformation.

Trump has posted nine tweets since the polls closed on Tuesday evening. Four of them have been tagged by the social network for containing information that is "disputed and might be misleading about an election or other civic process." These tweets are hidden behind a warning message, and the ability to reply to, favorite, or retweet them without comment has been restricted.

On Facebook, the same messages are all still up and readily viewable and interactions have not been restricted. However, the company has generated information boxes on all seven of Trump's posts made since Tuesday evening. Those boxes contain messages notifying viewers that election results will take longer than usual this year and that the race has not been called yet. Facebook has taken the additional step of placing banners across its platforms, including Facebook and Instagram, informing users that votes are still being counted and no winner has been declared in the presidential election.

The president's message at this point is a muddled one. He has called for officials to stop counting votes in Michigan even though he's trailing in the state at the time of publication and questioned the legitimacy of all mail-in ballots counted after the polls close, which is only happening because Republican lawmakers in states like Michigan, Wisconsin, and Pennsylvania specifically blocked efforts to count votes early. At this point, Trump is actually reliant on mail-in votes getting counted, as a good showing in early voting is the only chance he has to win back Arizona.

If there is anything resembling clarity from his tweets and from all of his messaging leading up to the election, it is that Trump's plan is to win by any means necessary, so counting votes is not exactly a priority for him. That seems to have some thinking that the president is looking for a fight, and whether that is the message Trump intended to send or not, it's the one far-right extremist groups are hearing. According to a report from the Washington Post, online communities for Neo-Nazis and white supremacists have taken Trump's declaration of victory as a rallying cry and an invitation to hold on to power by force if necessary. Members communicating via the messaging app Telegraph have reportedly been sharing photos of firearms and ammunition and sending messages indicating they are ready to seek out and commit acts of violence.

Trump hasn't been alone in sending out messages claiming that the election is being stolen. Plenty of commentators on the right, from Candace Owens to Benny Johnson, have tweeted similar claims, which further rile up their followers. All this is happening without an actual result in hand. If Joe Biden does end up securing enough electoral votes to become president-elect, it seems likely that these types of messages will only become louder and more desperate. If things continue to escalate, Trump's cries of impropriety may lead to actual violence. There already appears to be an audience for it.