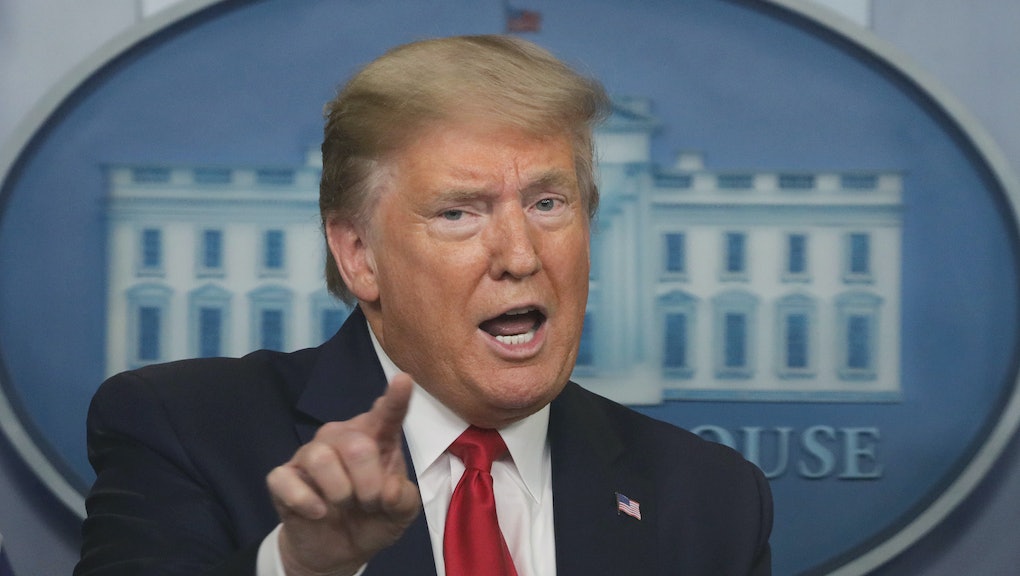 President Trump is Mad Online again. After he fired off a couple tweets that contained false and misleading information about mail-in ballots, Twitter fact-checked the content of the posts (something that it has long been reluctant to do) and included a disclaimer below the original tweets that said “Get the facts about mail-in ballots” with a link to more information. While the content of his tweets wasn’t changed or removed from the platform — something Twitter has done with other tweets found to contain misinformation, including those from presidents of other countries — Trump threw a fit. According to the president, the disclaimers amount to "stifling free speech." Now he is promising to take action against Twitter and other social media platforms, claiming that he will "strongly regulate, or close them down."

In a series of tweets on Wednesday expanding on his beef with fact-checking, Trump claimed that social media companies have made a habit of silencing conservative voices. There is, at the very least, a possible kernel of truth within that statement — though it doesn't really have to do with the types of posts that Trump is making.

A 2016 Gizmodo report cited a number of Facebook workers who claimed that the company suppressed conservative news sites from appearing on the platform’s now-defunct "trending news" section — leading to the company taking meetings with conservative groups and removing human curation. That claim sparked a massive amount of backlash from conservatives and has continued to be one of the sticking points that Republicans point to when they talk about bias in Silicon Valley. Trump, in particular, routinely talks about how conservatives are "censored" on social media platforms and has reportedly gone so far as to draft an executive order that would have the Federal Communications Commission and Federal Trade Commission police reports of anti-conservative bias.

To be clear, there is little evidence of anti-conservative bias taking place on social media. A study published last year by (the very progressive) Media Matters for America examined the likes, comments, and shares received by popular pages on both the left and right sides of the political spectrum. It found engagement to be almost even: Right-leaning pages saw, on average about 372,000 weekly interactions while left-leaning pages had about 369,000 weekly interactions. Conservative outlets also often dominate when it comes to overall engagement on the platforms.

While both Facebook and Twitter have rules in place that allow them to fact check, flag, and even remove posts that contain falsehoods, neither platform had ever actually exercised this power against the president of the United States until Tuesday. What makes Twitter's decision to fact-check the president so strange, aside from the fact that it never has before, is that the company has publicly declined to remove tweets from Trump pushing a conspiracy theory that MSNBC host Joe Scarborough was involved in the murder of Lori Klausutis, despite requests from her widowed husband to delete them.

Twitter has not yet marked Trump's tweet claiming that fact checks are somehow "stifling free speech," but here's the truth: Twitter is within its rights to add these disclaimers. "There is no First Amendment violation with what Twitter has done here," Faith Sparr, a communications law and media policy lecturer at the University of Michigan, tell Mic. "Twitter is a private company and to have a First Amendment violation, a state actor must abridge the speech."

Trump is engaging in a common misuse of the concept of free speech, as guaranteed by the First Amendment — and his tweet has launched thousands of bad legal takes trying to explain how Twitter's actions amount to censorship or suppression. But, Sprarr explains, "it only rises to the level of an actual First Amendment issue if the government is engaging in the so-called suppression."

There have been instances of First Amendment violations happening on Twitter, but as Sparr points out, it's actually the president who committed those offenses. "The ironic thing with this interaction between Twitter and Trump is that the Second Circuit Court of Appeals last year held that Trump violated Twitter users' free speech rights by blocking them on his Twitter account." The case, Knight First Amendment Institute v. Trump, found that because the president was using his Twitter feed as a sort of public forum, he could not block users who simply disagree with him. The same logic likely would not have applied to Trump if he were just an ordinary citizen, but because he is a government official, he can't keep the public from accessing his posts.

As for Trump's threats to regulate or even shut down social media over a simple fact check, it seems unlikely. Sparr says that Twitter is "under no obligation to bend to the president's inaccurate interpretation of the First Amendment," though noted that the company "may capitulate simply because the heat becomes too great or they think the wiser course of action is just to let all the tweets fly." However, she notes that the company has policed content on its platform in the past, in similar ways to how it handled Trump's inaccurate tweets, and has not faced legal consequences because "it can kick users for violation of its terms and conditions at any time it wants."

Trump might have other levers to try to impose his will on the platforms. He might dust off his executive order to target anti-conservative bias, though it's unclear how effective it would be. Sparr notes that he could show interest in revising Section 230 of the Communications Decency Act, which she explains, "provides online platform providers with broad immunity from liability associated with content hosted or distributed that is not of the platform providers own making." It’s unlikely that Trump goes this route, or really does anything substantial that would change the way social media platforms operate. It’s incredibly likely, however, that he’ll keep tweeting through it.