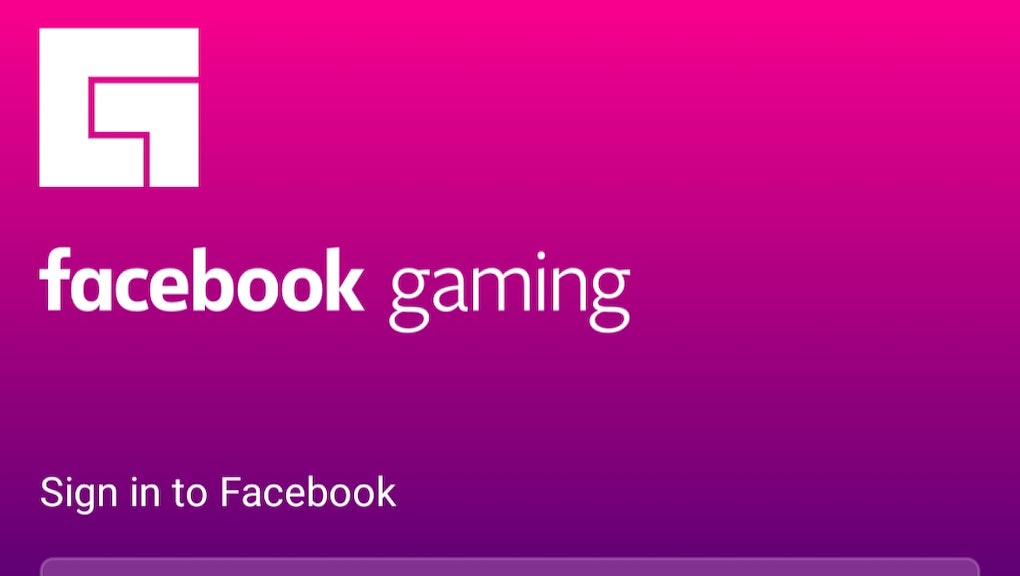 Today, Facebook released a gaming app intended to compete with platforms like Twitch, YouTube, and Mixer. Facebook Gaming will allow anyone with a Facebook account to stream whatever game they're playing with the simple press of a button. The app is designed to make livestreaming games as easy as possible, and requires no special webcam, headset, or recording equipment. All a prospective streamer needs is their smartphone.

The app underwent an 18-month-long test run in Southeast Asia and Latin America before finally appearing on the Google Play store on Monday, after an expedited launch (the app was originally scheduled for a June release). The audience for the platform has continued to climb since Facebook stepped into the gaming industry; Streamlabs, a software service that helps people with livestreams, lists Facebook Gaming as the third most popular platform for viewing streams behind Twitch and YouTube.

The app itself is very simple to use. Once you've installed it and signed in using an existing Facebook account, it automatically takes you to a home screen that plays various trending streams alongside advertisements for other games. You can look through users or games you're following or browse categories using icons at the bottom of the page to see what your friends are playing, what strangers are playing, and any messages that come in from Facebook Messenger.

If you're looking to stream, tap on the home screen button that says 'Go Live' — it will allow you to select a game on your phone and begin streaming. Once you're in the game, hit the 'Live' button once more to begin recording. The video I recorded ended up posting to my timeline in 360p, which is… frankly, not that great for viewing on a browser, but okay enough for the phone, I guess.

Users also have to keep in mind that the app will record absolutely everything, including notifications, messages, audio, and any other pop ups. Facebook Gaming makes sure to warn people that any broadcasts posted on your timeline could potentially reveal sensitive information if you're not careful. Thankfully, the company has provided privacy options for any uploaded videos. Users can make them viewable to 'only me,' the 'public,' or 'all friends.'

There are also options for a selfie-like face cam and muting your mic while playing. Viewers can send 'stars' to broadcasters as a way of sending donations (a portion of which goes to Facebook). Once you're done recording, you can hit the 'Live' button again to end the stream. Overall, it's a very simple process that doesn't ask for anything extra equipment-wise, which is really the point of the app.

"There are a lot of people who listen to music and say, 'I can imagine myself being a musician,'" Vivek Sharma, Facebook's vice president for gaming, told The New York Times. "People are watching streams and they're like, 'I want to be a streamer,' and with Go Live it's literally just a few clicks and then live, you're a streamer."

Possibly thinking along the same lines as Quibi, the company felt the mobile phone was the best way to start. Not only is it more accessible, but it also demands the full attention of the user and viewer. "We don't want to be the background window in a Chrome tab while someone is doing their homework or doing something else," Sharma explained to the Times. "With mobile, if you have the app open and you're using the app, it's in the foreground. You can't do anything else on your mobile phone, and that is extremely powerful."

Taking a look at the trending streams, however, I didn't notice a lot of amateur users. Many appear to be long-time streamers with a full desktop setup. I found just one casual-looking user streaming himself from his phone as he walked around with Pokémon Go. Perhaps once more regular users hop onto the platform, the types of streamers will become more varied.

Additionally, I already found a couple videos that had nothing to do with gaming at all, though they were tagged as games. One was a constantly repeating video of a real-life gas balloon that exploded during a festival. Another video depicted an incredibly gnarly blackhead removal. With all the videos in my home screen autoplaying as I scrolled through, I didn't have much choice but to catch glimpses of these while browsing.

At the moment, Facebook Gaming is only available on Android phones, as the company is still waiting for Apple's approval to release an iOS version. But, with non-gaming videos already showing up on the home feed so easily, concerns about moderation might be a problem for the average user to consider. Livestreaming platforms like Twitch and YouTube require so many mods, hired by both the companies and the streamers, to manage videos and chats. Time will tell whether the casual Facebook user is ready for the potential messes that come with streaming for fun.

More like this
Instagram now lets you add pronouns to your profile. Here's how to do it
By AJ Dellinger
The ethics of solar power are more complicated than you think
By Vanessa Taylor
He made a cryptocurrency called SCAM. Now he's trying to make it legit
By AJ Dellinger
Stay up to date