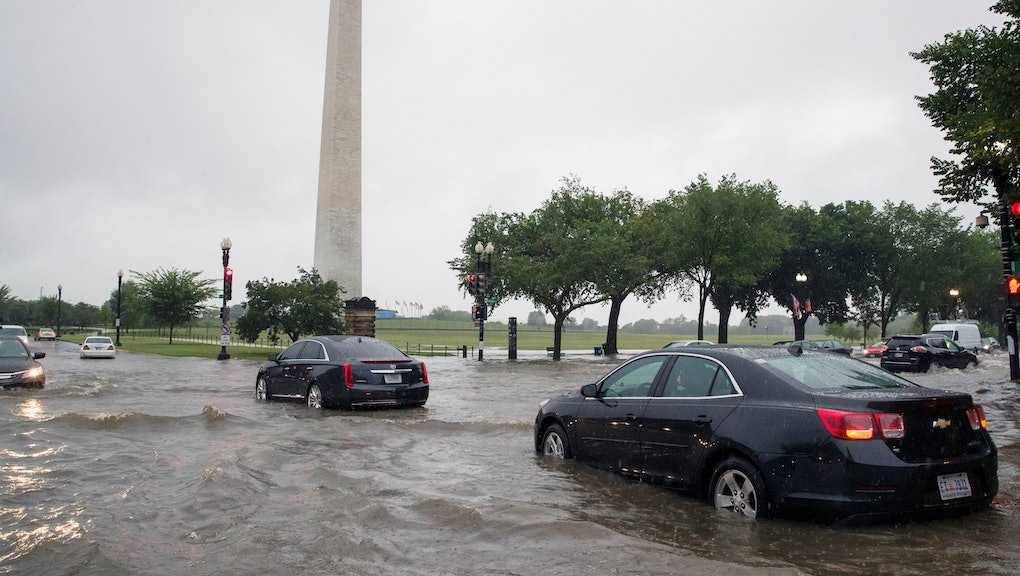 Flash-flooding in Washington, D.C. may provide a look at what’s to come with climate change

On Monday morning, July 8, severe flash floods hit Washington D.C and the surrounding areas., and chaos reigned. Dozens of people had to be rescued, power went out for thousands of people, trains and buses were delayed indefinitely. According to the Washington Post, four inches of rain fell in an hour – a weather event that statistically occurs once every 200 years. It is the latest severe weather to make the news in recent weeks, and seems to be part of the new normal in a climate that seems to be rapidly deteriorating.

But it's not just a feeling; the reports of flash floods, extreme heat, tornados, and wildfires aren't unfortunate coincidences, an odd summer of freakish weather. According to scientists, this is likely what will living in a destroyed climate is going to look like.

In October 2018, the Intergovernmental Panel on Climate Change (IPCC) released a report detailing their findings on the results of climate change. They were grim; based on their studies, the destruction of much of the world would occur by 2040 – sooner than previous research suggested. This destruction would come in the form of the death of ecosystems like coral reefs, intense food shortages, and a further increase in wildfires. In order to prevent this, the 91 scientists say that the entire world economy would have to radically change: high taxes on carbon output would need to be implemented, and the use of coal as an electricity source, would have to be dramatically reduced or end entirely.

The contents of the report should have seemed like an unimaginable world. But in 2019, California has seen 240 wildfires in a single week. Record high temperatures were recorded in India, several European countries, and many cities in Florida. Alongside Washington D.C., flooding has inundated the U.S. Midwest and the United Kingdom. The nation of Greenland is melting.

This may sound like fear mongering; natural disasters have always been a part of human history after all. But the problem is that these natural disasters are occurring with a severity previously unrecorded, and it corresponds with extensive research that suggests that human activity is actively destroying the climate. And not only is there substantial evidence to suggest that the climate is only going to become more inhospitable to life on Earth – it doesn't seem like much is being done about it.

The IPCC found that only radical change in production and consumption could prevent the increase of the Earth's temperature. That doesn't mean our recycling habits, or shorter showers, or plastic straw bans. It means policy changes, corporate-level decision making, international cooperation. But instead, many governments have failed to step up to this impending threat, maybe none more spectacularly than the United States.

Not only did the U.S. pull out of the Paris Climate Accord after Trump was elected president, but his administration gutted the efficacy of the Environmental Protection Agency. Under Trump, former petrol executives and energy lobbyists were made heads of the agency. Trump's first pick for EPA, Scott Pruitt, even stated that climate change could benefit human beings. The agency's focus was also shifted from supporting the development of clean energy, like wind and solar power, to increasing the production of coal.

The administration has also seen the erasure of the worlds "climate change" in a U.S. Geological Survey study of the California coastline. And it's not just Trump's administration, it's also his party. Republican lawmakers have repeatedly blocked attempts at legislation and resolutions, like the Green New Deal, which would address some of the largest climate concerns in the country.

The U.S. government's failure to take serious action in response to these inevitable and increasingly frequent activities has drawn plenty of criticism. Following the floods in Washington, D.C. on Monday, Rep. Alexandria Ocasio-Cortez called out her fellow lawmakers for their inaction.

"Each day of inaction puts us in more danger," Ocasio-Cortez wrote.

Even though floodwaters filled the streets of the city that the president resides in, there doesn't seem like there is anything that could convince him that climate change is a legitimate threat to the world. But hopefully other lawmakers who were wading their way to work in D.C. begin to recognize that the latest bad weather isn't just complicating their commute; it's a symptom of a much larger, more severe problem.