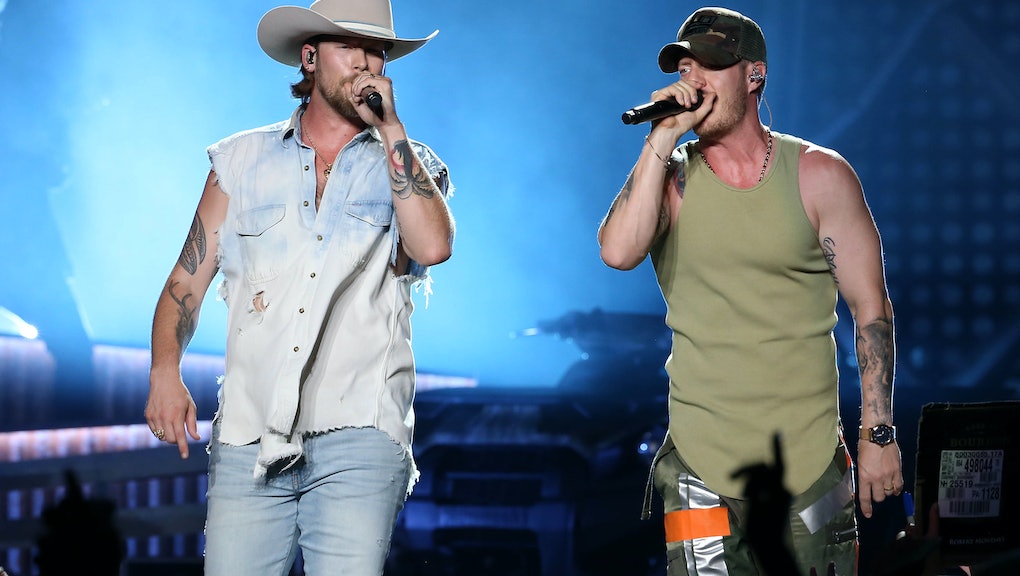 Even if you don’t think you know Florida Georgia Line, the country duo that’s crossed the billion-stream mark on Spotify plays and owns a Nashville restaurant dubbed FGL House, you definitely do. Times are strange for the country superstars, one of whom tested positive for COVID-19 and forced the band to pull out of the upcoming Country Music Awards, and the other taking issue with celebrations for Joe Biden’s electoral win.

The saga began on Monday, when Tyler Hubbard, the Georgia guy, announced on Instagram that he’d tested positive for COVID-19. He joined fellow country star Lee Brice in dropping out of the CMAs over positive test results. Following the news of Hubbard’s COVID-status, fans speculated that there was some other politically motivated turmoil brewing within the band.

Us Weekly reported that Hubbard and his wife, Hayley Hubbard, unfollowed his bandmate Brian Kelley, the Florida guy, on Instagram. Over the weekend, Kelley joined a number of country stars in claiming the post-election celebrations were hypocritical, since he hasn’t been able to perform in concert for much of the year. “Time to go back to work AMERICA. Booking shows ASAP,” Kelley wrote. After one fan suggested that Kelley voted for Biden, he responded, “Think again bub.” Kelley also follows Breitbart, Charlie Kirk, and Donald Trump Jr. on Instagram.

The Hubbards have been publicly supportive of the Biden-Harris campaign, with Hayley recently posting a photo of her daughter, thanking Harris for “standing on the shoulders of strong women so my daughter can stand on yours.” US Weekly adds that Kelley’s wife, Brittney Kelley, added the following to her Instagram story on Monday: “Real friends don’t always agree with [you] but they do respect your right to have an opinion.” The Hubbards both shared photos from CMAs past on their Instagrams on Tuesday, including some full band shots.

Much like with Lil Wayne’s relationship that at least partly imploded over President Trump, fans worried that Florida Georgia Line would be the latest casualty of the 2020 election. Although Instagram unfollowing is usually the work of an athlete who's on the verge of leaving town for a new team, Tyler Hubbard refollowed the Kelleys. However, Hayley and the Kelleys haven’t undone the unfollow. Isn’t this fun!

As in any struggling relationship, a source close to the Florida Georgia boys issued a statement to Us Weekly indicating that everything’s peachy. “All is good with the FGL family. Tyler and Brian’s friendship is as strong as ever,” the source said.

Anyway, we’ll have to stay tuned and see if this is a permanent wedge or if they can get over their differences to continue making a large sum of money together. If only every politically fractured friendship had that same incentive!