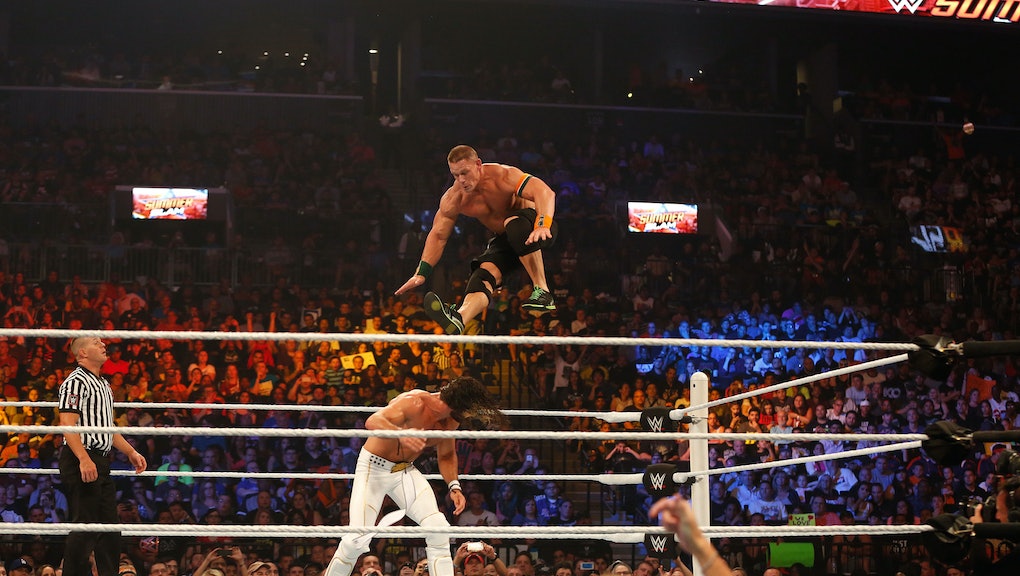 This reads like a Florida joke but, uh, isn’t: It was revealed Monday that Florida Gov. Ron DeSantis designated WWE, i.e. professional wrestling, an “essential business” in his state. People have been irate about the notion of weed dispensaries and gun shops staying open amid the coronavirus pandemic, but deeming live wrestling essential in Florida just takes the insanity of our current historical moment to a new place.

Governor DeSantis has been roundly criticized for mishandling the coronavirus pandemic response in Florida. He declined to close the state’s beaches, allowing spring breakers to party unencumbered; many of them subsequently caught the virus and brought it home to their communities. DeSantis has also been pushing hydroxychloroquine, the unproven and potentially deadly malaria drug Donald Trump also seems to think could cure COVID-19.

The wrestling thing came out during a press conference, when Orange County Mayor Jerry Demings was asked whether WWE was continuing operations in his city. Demings said live wrestling initially wasn’t deemed an essential business, which, you know, makes sense. But a conversation with DeSantis changed things.

However things went down, the order meant WWE could resume taping and airing live shows on Monday starting with WWE Raw, after airing pre-recorded matches for several weeks. The WWE Performance Center near Orlando, Florida, was entirely devoid of fans, however, as the state is under month-long “shelter-in-place” orders authorized by DeSantis on April 1.

A spokesperson from the Florida Governor’s office reportedly told ESPN that WWE was deemed essential “because they are critical to Florida’s economy.” That institutes a dangerous precedent about what can and should be deemed essential in a crisis: the companies that make the most money versus those whose services are literally essential to daily life. How much cash do you think Disney’s theme parks contribute to Florida’s economy? Reopening them too soon in the name of economic stimulus would be a public health disaster.

Resuming live wrestling without fans still puts people at risk: all the performers, stagehands, camerapeople, and producers on hand to put the shows together. There’s a really good reason all other TV shows and movies in production have halted shooting, for the most part. We can all imagine the potential for COVID-19 contagion between sweaty wrestlers who may or may not be actually beating the crap out of one another but are certainly swapping, uh, fluids. Did WWE learn nothing from the NBA and its league-shuttering coronavirus outbreak?

Letting WWE resume live shows is dangerous and unethical, but people have come to expect as much from Governor DeSantis. That still shouldn’t be an excuse for him to put lives at risk.

More like this
"Our society is really totally nuts": Newly revealed emails show how Fauci really felt during the pandemic
By Rafi Schwartz
Why are there protests in Colombia? How a tax proposal ignited decades of unrest
By Ray Levy Uyeda
We might have AI-powered murder drones to worry about now, a U.N. report suggests
By AJ Dellinger
Stay up to date