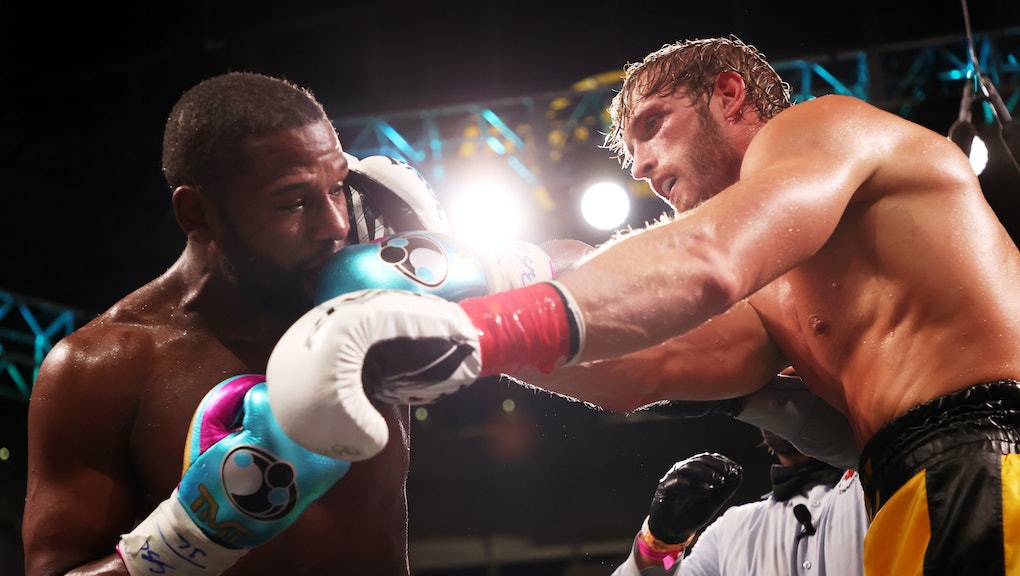 Last night, Logan Paul got in the ring with Floyd Mayweather for what most expected to be a thorough ass-kicking. The match, streamed on Fanmio, raised some burning questions. Why would an amateur like Paul go toe-to-toe with a semi-retired welterweight champion? And why would that champion — cut from a different cloth than KSI — let the disgraced vlogger anywhere near him?

A quick look at the money involved tells you all you need to know. According to Sports Illustrated, Mayweather was handed a $5 million check in advance, while Paul himself was guaranteed at least $200,000. The bulk of their earnings, however, surely came from pay-per-view sales, with Mayweather having said he was expecting to earn up to $100 million from the event. The number, though likely too high, is not altogether unthinkable considering the buzz Paul generated after ridiculing his opponent on social media more times than worth counting.

Thanks to his opponent’s internet notoriety, Mayweather’s match against Paul will go down as one of the most sensational (and lucrative) in his career, despite the fact that it wasn’t the bloodbath people were hoping for — and that begs another, even more pressing question: why were so many people interested in seeing a living legend wipe the floor with a less-than-average Joe to begin with?

Schadenfreude has always gotten clicks, but it’s become a lot less creative and a lot more sinister as the internet evolved. Ever since Johnny Knoxville became famous by putting his own life on the line, copycats have tried to recreate his success with minimal effort. Stripping the Jackass-formula of its Evel Knievel-style spectacle, they were left with just one ingredient: inflicting as much pain on someone as possible.

That said, there’s one fundamental difference between seeing Knoxville get in the ring with a bull and Paul facing off against Mayweather, and it has something to do with the fact that watching Mayweather kick Paul’s ass in a safe and controlled environment feels kind of cathartic. There’s no shame in admitting that either, as Paul has blatantly capitalized on this sentiment for most of his tenure as a celebrity.

The obnoxious Paul — not unlike the cocky Mayweather, who people pay to see lose but never loses — is somewhat of an expert in using his repulsiveness as a means to boost publicity. Looking at Logan’s career specifically, there’s no shortage of stunts that were specifically designed around this strategy, such as videos that trivialize suicide and poke fun at torturing animals among many, many other tasteless subjects.

For a short while, all this stooping worked out rather well for Paul. Then, YouTube executives decided to suspend advertising on his channel, saying it displayed a “damaging” pattern of behavior. The decision posed a problem for Paul’s lavish lifestyle that, it seems, he has since addressed by following entering the arena along with his younger brother Jake.

As YouTube celebrates Paul’s departure, the world of boxing bemoans his arrival. Though the vlogger’s online following of lovers and haters alike is revitalizing the dying sport with towering profits, they are also replacing fights between actual athletes with staged tournaments that are closer to Hulk Hogan than they are to Mike Tyson.

Not that Tyson, long out of the game himself, seems to mind. “Boxing was pretty much a dying sport,” he said, after watching Jake Paul beat retired NBA player Nate Robinson. “UFC was kicking our butts and now we got these YouTubers boxing with 25 million views. Boxing’s coming back.” That may well be, but at what cost?

Writing about the increasingly reckless and immoral behavior displayed by content creators chasing subscribers and page-views for Mic, reporter Jessica Lewis argued that audience members were just as complicit in the harm caused by those they pay to watch. Perhaps, if we stop putting down money to see Logan Paul fall flat on his face, maybe he’ll finally leave everyone alone.