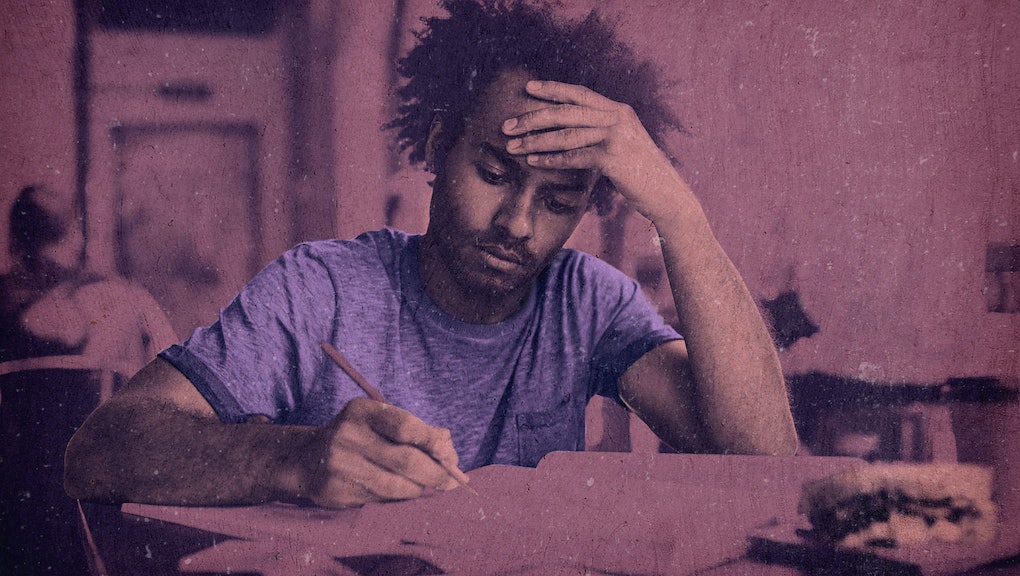 Food insecurity at colleges is worse than ever, with nearly half of all students going hungry

With student loan debt at an unprecedented high and wealthy parents bribing their children's way into schools, income inequality in America's higher education system has never been more apparent. And it's not just about who can afford college tuition — it's also about who can afford to eat while they're in college. A nationwide study published by the Hope Center for College, Community, and Justice (HCCCJ) in May revealed a troubling truth about life on campus: nearly half of college students are going hungry.

According to the study, 45 percent of the 167,000 respondents from 123 colleges reported being food insecure in the prior 30 days. HCCCJ describes food insecurity as "the limited or uncertain availability of nutritionally adequate and safe food, or the ability to acquire such food in a socially acceptable manner. The most extreme form is often accompanied by physiological sensations of hunger."

There are a myriad of reasons why people experience this while in college, from having to support family members to dealing with overwhelming student loans, but the outcome is the same: they can't afford to buy food. And per the study, students at two-year colleges are more likely to experience food insecurity than those at four-year universities, as are non-white students, students who are also parents, and LGBTQ students.

Makayla Thornton, an incoming senior at the SUNY College of Environmental Science and Forestry, says that her food insecurity began prior to junior year, when she transferred from another college and her tuition increased. Her parents were no longer able to contribute to her day-to-day expenses, and her job didn't pay well. So Thornton would regularly skip meals, sometimes subsisting only off food she'd take home from work.

"On my days off from work, I went to bed hungry because I didn't have food," Thornton tells Mic. "On days I did work, I'd snack while I was there because my boss wasn't there to tell me to stop (I knew it wasn't right to take food from work but I'd be close to fainting, so...)."

By the start of the second semester of her junior year, Thornton decided to take out a private loan to cover her living expenses, but it came with a high interest rate; recently, she took out a second private loan, with an even higher interest rate, to get her through the summer while she takes on an unpaid internship. Even with the loans, though, Thornton has still struggled with food insecurity.

"Eating on campus was hard because it's so severely overpriced and not filling," she explains. "So I'd sit in lectures with a headache debating whether or not it was worth it to buy a muffin from the cafe in the basement."

Over the past 40 years, the costs for public and private institutions have nearly tripled, per Forbes, yet the medium income in the country has remained relatively stagnant. As such, more students than ever cannot afford to attend college, so, like Thornton, they're taking out loans to cover everything from tuition to books to food — often with dangerous consequences. According to a Pell Institute study, "In the 1990s, just over half of Bachelor’s degree recipients borrowed; by 2016, 70 percent borrowed. The average amount [of debt] for graduating seniors has risen to $30,000."

For hungry students hoping to avoid going into major debt, there are limited options. Kenya Hunter, a journalism graduate student at Emerson College, tells Mic that when she realized her work study jobs wouldn't be enough to cover her bills, she applied for the Supplemental Nutrition Assistance Program (SNAP), formerly known as food stamps, which gives recipients an allotted amount of money to purchase groceries. Hunter receives $150 a month, but even the cost of basic items like eggs and milk cuts through her budget quickly. And SNAP doesn't leave room for emergencies; when the government shut down for 35 days this past winter, Hunter's typically frugal approach to grocery shopping had to become even stricter.

"There were no signs of the government opening up anytime soon, so I decided to cut back," she recalls. "I was stressed out, because I thought I was visibly losing weight. And I was also always hungry."

Indeed, while SNAP can provide significant support to its users, it can't completely offset the cost of food for most people or help them cope with unexpected expenses. And although two million college students qualify for the program, "57 percent of potentially eligible students are not receiving the benefit," says Carrie Welton, a policy analyst for The Center for Law and Social Policy (CLASP), due in part to a lack of information about SNAP being dispersed on campuses. It doesn't help that the program's enrollment process is so confusing that many people are unable to successfully send in applications, adds Welton.

As awareness over food insecurity on college campuses grows, Welton hopes that more students will learn about SNAP and consider joining the program (and that the application process will get easier). But even if that's the case, there's still another major challenge for hungry students considering seeking out assistance: the stigma.

"This nation has done a very good job of shaming people for being poor, and there's a lot of stigma attached to public benefits," explains Welton. "We find that students are hesitant to both pursue getting public benefits even if they could be eligible and then be known as receiving public benefits on campus due to that stigma."

Not every student who receives assistance is worried about how it'll look, of course; Hunter tells Mic that she, for one, doesn't "see the point in stigmatizing people for food stamps," explaining that she views her situation not with shame, but with determination, as she's managing to finish her graduate program any way she can — government assistance included. Yet for many other students at elite private schools, where some parents are capable of not only paying a tuition that can run upwards of $250,000, but also of funding their kids' meal plans and dining habits without issue, stigma is indeed a concern.

And while campuses across the country have long struggled to address affordability issues, from tuition to textbooks, elite universities have an especially poor history of helping their low-income students. According to the HCCJ study, both colleges and the U.S. government have a long way to go when it comes to helping hungry students. For one thing, they need to collect better, more accurate data about their students' economic status; for another, they need to spread information on SNAP so that all students are made aware of the program and can apply if necessary.

Some changes are already being made; since the Government Accountability Office released a survey in 2018 about the lack of students who know about SNAP, several campuses have instituted small-scale programs to grow awareness of the program. Still, there isn't a national campaign to inform students about SNAP, or a plan to simplify its sign-up process. The HCCJ study also noted that more healthy, affordable meal options need to be made available on campuses, and that food pantries need to be regular, reliable resources, but only in recent years have some universities begun opening food pantries and reaching out to hungry students.

Students have increasingly been forced to take colleges' lack of action on food insecurity into their own hands. The student-led organization College and University Food Bank Alliance, for instance, works to establish food pantries on campuses; as of 2018, CUFBA had 686 members operating food pantries across the country. Yet even as college food pantries become more commonplace, many of them struggle with funding and meeting their users' needs, according to the HCCCJ.

No matter what actions students take, food insecurity will continue to be an issue for countless people attending college. Ending hunger on campuses will only come once there's a fix for the severe income inequality in America that causes so many people to take out student loans and skip meals in the first place.

More like this
Biden got the COVID booster shot and didn't even flinch
By Rafi Schwartz
Ronald Reagan's would-be assassin is about to get a full, unconditional release
By Rafi Schwartz
Oops, the Arizona recount the MAGA crew demanded actually took votes away from Trump
By Rafi Schwartz
Stay up to date