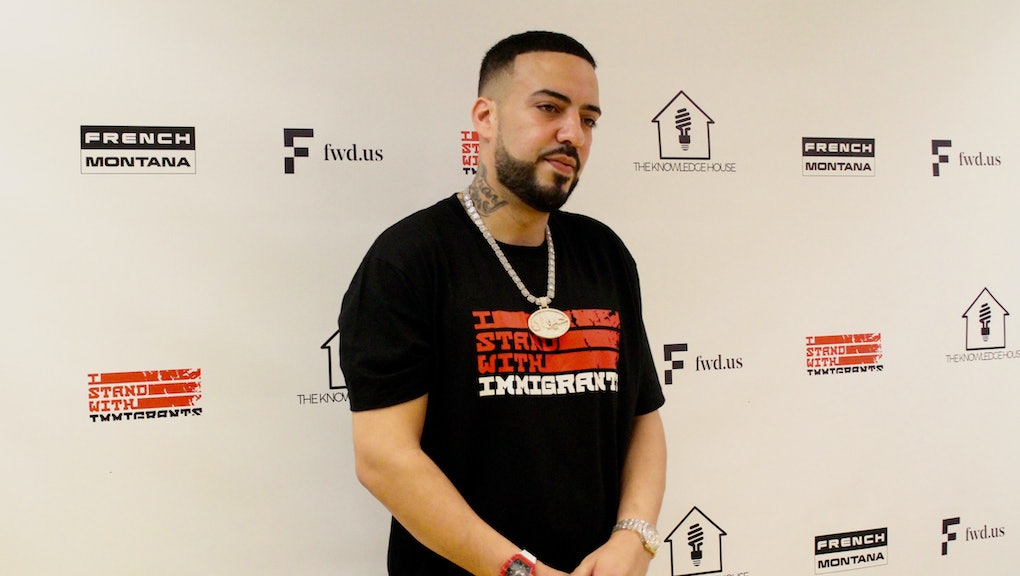 When French Montana walked onto the stage at Bronx International High School on Wednesday afternoon, the entire auditorium erupted in eardrum-shattering screams. The teens had waited after school to see the rapper, who grew up in the same borough they did. French Montana was there to announce the beginning of his role as the first ambassador for I Stand With Immigrants, a new program powered by FWD.us and The Knowledge House that will showcase stories of immigrants and immigration.

For Montana, the project is personal — he arrived to the Bronx when he was 13 years old, having moved from Morocco and not speaking any English. He knows what it feels like to start life in America as an immigrant, and how it can leave a deep effect on a young person.

"It's having doubt before you have faith," Montana told Mic in an interview after the event. "It can be a real hurdle. A lot of people can't overcome that hurdle."

Montana is trying to make it a bit easier to overcome that hurdle. Portions of the $25 I Stand With Immigrants t-shirts will go to DACA renewal fees, which can be prohibitively expensive. DACA is the Deferred Action for Childhood Arrival immigration policy that began in 2012. Under the Trump administration, Jeff Sessions revoked DACA in 2018. This means that new applications aren't accepted, but those who received their DACA status before March of 2018 can still apply for renewal.

This was a focus for the other guests at the event. New York City Public Advocate Jumaane Williams and New York Assemblywoman Catalina Cruz urged any students in the crowd to renew their DACA status if they had it. DACA is one of the main issues that French Montana cares about as a new citizen of the United States. He explained to the crowd that he was going to vote for the first time in the upcoming elections, and urged everyone in attendance to get registered.

Despite his excitement about his ability to be more civically engaged, Montana kept any political support for 2020 candidates close to the chest. He joked a bit about supporting Kanye West in the next race, but was otherwise mum on naming any candidate he was ready to endorse.

"This is my first year voting, but I always believed that if I vote, I'm going to vote for a leader that leads with love," Montana said. "Someone that makes everybody feel like they have an equal opportunity. Because I feel like it's a right, not a privilege."

Montana also donated $50,000 to The Knowledge House, an organization that works to bring tech skills to kids in the Bronx. It's another way to overcome the systemic lack of resources kids in the borough — immigrant or not — have to deal with.

For Montana, donating his time and resources towards a cause he cares about is nothing new; he is the first rapper to become a Global Citizen Ambassador, and he's a donor to Mama Hope, an organization the builds hospitals in underdeveloped communities. He's also a longtime advocate for criminal justice and immigration reform. To him, it seems like the only logical way to use his fame.

"I feel like if you don't give back, what's the point of even having your platform? Might as well just not even be who you is," Montana explained. "God says that sometimes when he gives you something, it's to bless other people. Sometimes you might be blessed just because you're blessing somebody else."