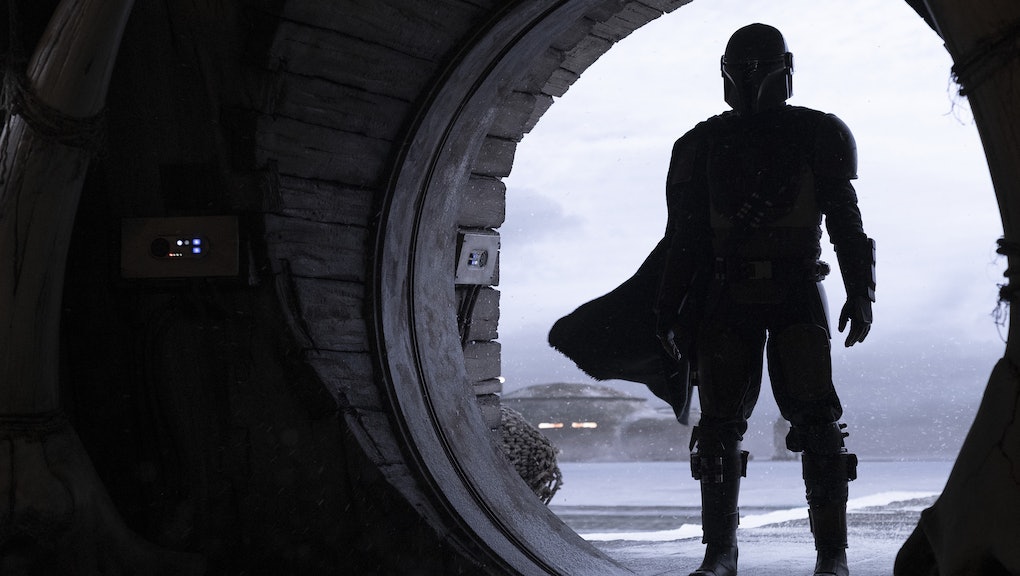 From Baby Yoda to Cara Dune, our favorite outfits from 'The Mandalorian'

This morning, I passed a line of what looked like 75 people waiting outside of the streetwear brand Kith's New York storefront. Everyone seemed cold, miserable, and overly eager. I don’t know what they were waiting for, but I'm sure it was part of a broader quest to one day achieve the perfect outfit — perhaps so they could post their accomplishment on Instagram. But, as hard as those shoppers may try, they'll likely never come close to the atelier perfection achieved by the fictional characters in Disney+’s The Mandalorian.

If you haven’t seen the show, it is a Star Wars western set between the fall of the Empire and the rise of the First Order. There’s bounty hunting, pig riding, and orphan rescuing. All of the characters have plenty going on, but it hasn’t prevented anyone from expertly mixing textures.

Below, an assessment of The Mandalorian’s best-dressed characters.

Baby Yoda is a 50-year-old baby reliant on another person’s kindness for his survival. This coincidentally describes a great deal of the fashion industry, but I don’t think that was the point Jon Favreau was trying to make with our adorable little green Jedi master. Baby Yoda is easily the best thing about The Mandalorian so far, both because of his inherent, almost impossible, cuteness, and because of the way he rocks the hell out of that burlap sack.

With a cowl-neck, rolled sleeves, and the drapey fit that subtly says “I took this to a tailor,” Baby Yoda looks like he used the force to keep the creators of Engineered Garments in a room for 76 hours to design the perfect burlap cagoule.

If you’re a fan of Pedro Pascal’s face, the Mandalorian’s outfit will be supremely disappointing to you, at least for the first two episodes of the show. His face was nowhere to be seen — but he had plenty of leather accessories to make up for it. Taking the streetwear aesthetic of wearing tactical gear to new levels, the Mandalorian has chest pads, thigh pads, forearm cuffs, the whole thing. And unlike the streetwear gods with 10,000 Instagram followers strapping themselves in orange camouflage, the Mandalorian actually needs all that extra padding because he’s wrangling space creatures and rescuing Yoda and fighting droids.

Carl Weathers as Greef Carga is simply wonderful, made better by his commitment to a cross body vest/cape and his leather gloves. The light fabric of his tan tunic suggests he’s into breathable fabrics that toe the line of billowing — anything of lower quality would surely succumb to the wind.

This is a minor Star Wars character, but he also looks like a man standing outside of a high-end bar, sucking on his vape while he explains that he only purchases repurposed leather outerwear. He probably just finished describing the different whiskeys he just ordered for $96 in painstaking detail. Somehow, even though you find him terrible and do not want to listen to him talk about his beard balm, you admit to yourself that his clothes are pretty nice. You take his Instagram handle so you can DM him about which thrift stores he goes to. You’re looking for something fur-lined and don’t want to spend a fortune.

Cara Dune looks like she can do exactly what she does, which is handle a large space gun with confidence and grace. The fact that she’s pulling off shoulder plates while wearing a t-shirt makes it clear that she is not afraid of taking risks, and her all-black ensemble feels chic but doesn’t give off the impression that she’s afraid to wear color.

Surely, with the early success of The Mandalorian, the streetwear empresarios at brands like Kith will cook up some form of a collaboration. It wouldn't be a surprise to see Baby Yoda inspired looks on runways soon, and I'd maybe even wait in line to look like that adorable, wise, and stylish baby.