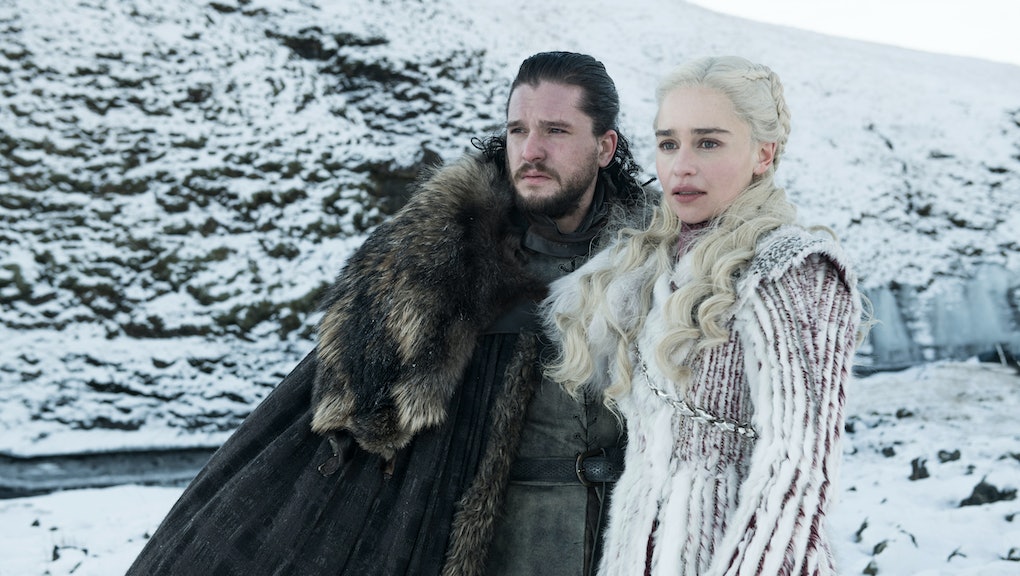 ‘Game of Thrones’ finale predicted to cause millions of people to be late to work, according to survey

It's hard to believe, but Game of Thrones is ending. For good. We're not talking for another year this time, either. The battle for the Iron Throne is about to take place once and for all when the Game of Thrones finale airs on Sunday, May 19, and then it's all over.

Naturally, we're all going to have to make a few sacrifices to make sure we're home to see every single bit of the final Game of Thrones episode ever. And if that means we're running a little late to our 9-to-5 job the next day, so be it. Finding out who will finally sit atop the Iron Throne is serious business!

If that's your mindset going into the Game of Thrones series finale, you're most definitely not alone. According to data extrapolated from a poll disseminated by The Workforce Institute at Kronos, an estimated 27 million employees plan either to miss work completely, arrive late, work remotely, or be less productive than they usually would — all because of the Game of Thrones series finale.

Of that 27 million, an estimated 10.7 million plan to skip out on work entirely. It makes sense — Game of Thrones usually airs in the United States for those on the east coast on Sunday nights at 9 p.m. ET. By the time it's over, it'll be well after 10 p.m. (the final installment will run a lengthy 80 minutes), which is already cutting into many viewers' energizing sleep for the next day. Might as well turn off those alarms, email the boss, and let them know you've come down with something, right? It's not like a cultural icon like Game of Thrones ends every weekend, after all.

The aptly-named "Absence is Coming" survey was conducted online from May 7 through May 9 and pulled from a sample of 1,090 U.S. adults, 18 and older and all currently employed (but for how long?). Given the small sample size, the "millions of workers" estimated to be missing out on work are only projections calculated by data obtained from the 2010 U.S. Census, the percentage of adults employed in the United States, and the percentage of respondents' answers in the survey. But still — how far off could those numbers really be? Game of Thrones is a big deal.

Season 8 of Game of Thrones has reeled in a massive amount of viewers, too. A whopping 18.4 million people tuned in to catch its penultimate episode "The Bells" alone, which exceeded the previous series high of 17.8 million viewers for the episode "The Long Night." To put things in perspective, according to HBO, the eighth season is averaging around 43 million total viewers per episode. That's an increase of more than 10 million viewers in comparison to the seventh season.

According to additional survey findings, the Game of Thrones series finale won't mark the first time respondents have decided to shirk their daily duties to spend time in the fantasy land of Westeros, either. In fact, an estimated 20.4 million employees would probably admit that making sure to catch the current season has affected either their attendance or performance at work. Further, a projected 4.4 million have missed work specifically to watch re-runs of the older episodes to get "caught up" just in time for new episodes to air.

And that's not limited to just American fans. On the other side of the planet, viewers in India are regularly scrambling the day after Game of Thrones airs on Sunday to watch the epic series at the crack of dawn on Monday mornings. This means some fans stay up until ungodly hours to see the latest happenings in the show, and others watch it on their commute to work. Some, like Vulture reports, even watch the episodes while they're at work.

These serial missed days and situations with reduced employee performance aren't great news for employers, as you can imagine. What are the collective bosses of the world to do? Well, who's to say they aren't also calling in sick while making popcorn and settling in for a long night of closure this Sunday?

One thing's for sure. Whatever the numbers actually reflect when the first Monday in a post-Game of Thrones society rolls around don't actually matter. What's important is that we all acknowledge how ridiculously huge this series has gotten — and we're all going to miss sitting down every weekend to see what's going to unfold in Westeros. Perhaps that means we're going to have to start looking for other reasons to call in sick, though.