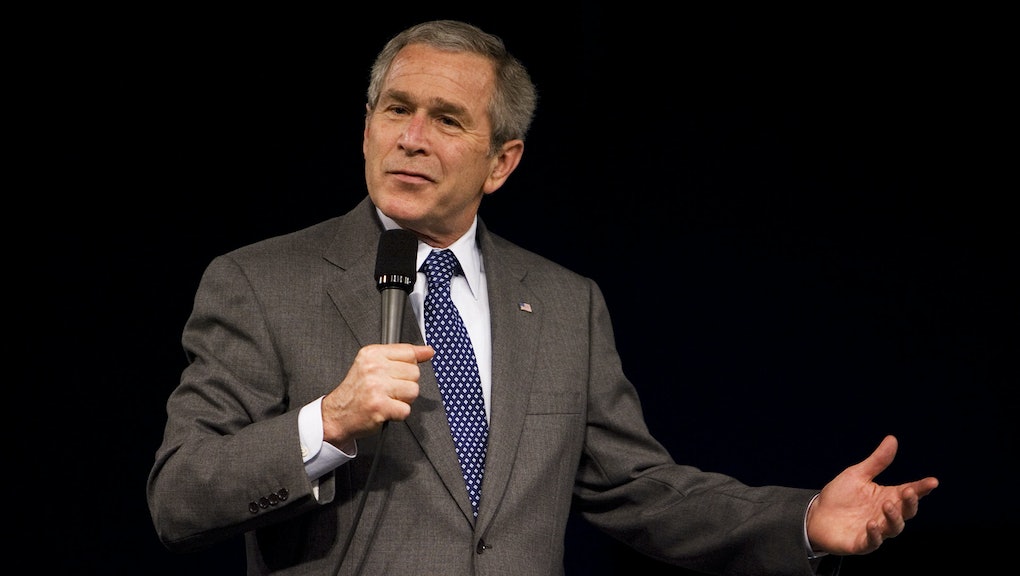 There are plenty of things to remember former President George W. Bush for, like his abandoning of New Orleans' predominantly Black residents after Hurricane Katrina — eerily reminiscent of how President Trump appears to pay little attention to how the ongoing coronavirus pandemic disproportionately harms communities of color — or his allowing the National Security Agency to surveil mostly Muslims following 9/11 without court-approved warrants. However, it seems Bush himself isn't satisfied with the legacy he left behind and is looking to rebrand. This week, it was revealed that Bush plans to "honor" immigrants with a new book of portraits that he painted.

On Thursday, Bush announced his new book, Out of Many, One, which will feature 43 portraits of immigrants hand-painted by the former president. Along with the book, which will be published in March, a public exhibition of the portraits will run from March 2, 2021, through Jan. 2, 2022 at the George W. Bush Presidential Center.

"At its core, immigration is a sign of a confident and successful nation," Bush said in a statement. "Our generation must ensure that America remains a beacon of liberty and the most hopeful society the world has ever known. We must always be proud to welcome people as fellow Americans. Our new immigrants are just what they've always been — people willing to risk everything for the dream of freedom.”

While some may find Bush's art heartwarming on the surface, something much more sinister lurks beneath. Bush's plans to honor immigrants is one among many efforts to sanitize his image. Beyond the publishing industry, celebrities like Ellen DeGeneres have played along with Bush's attempts to remake himself. But is our political memory so short that we allow a couple of paintings and a statement to make us forget what Bush actually meant for immigrants when he was in office?

With Trump in office, it's tempting to blame all of America's atrocities on him alone. Bush has capitalized on this, with his past criticisms of immigration under Trump. In 2018, Bush even said he was "disturbed" by the immigration debate taking place in the United States, adding that it "undermines the goodness of America."

Bush may say he's "disturbed" all he wants. Maybe that's true. It doesn't change that Bush has failed to ever really acknowledge or atone for his role in all of this. Because while Trump targets immigrants for surveillance and deportation, separates immigrant families at the border, and keeps children locked in cages, he did not come up with the infrastructure to do so by himself.

To many, Immigrations and Customs Enforcement seems like a permanent American fixture. However, ICE wasn't created until 2003, following Bush's signing of the 2002 Homeland Security Act that led to the formation of the U.S. Department of Homeland Security. Without Bush and his administration, there would be no ICE or DHS for Trump to leverage against people in the United States.

And while Bush may title his book "out of one, many," did he believe that when he launched the War on Terror, opening Muslims up to heightened levels of mass surveillance in the United States and destabilizing entire countries abroad? Did Bush believe "out of one, many" when he deported thousands of Muslims in the months following 9/11? Did Bush believe "out of one, many" when his administration "pioneered a radical new theory of executive power that literally vested the president with unlimited authority to do virtually anything in the name of national security, including breaking the law, and those theories were used largely to infringe the civil liberties of Muslims within the U.S.," as Glenn Greenwald wrote in The Intercept?

Trump is not exceptional. Without all the preceding presidents of the United States and the violence they wrought at the head of an empire, there would be no Trump. Keeping this in mind, Bush is not a goofy old white man with an artsy streak. He is part of the same legacy as Trump; the two cannot be separated from one another. Bush cannot be allowed to reinvent a presidency that took place within our lifetimes — no matter how many portraits he paints.