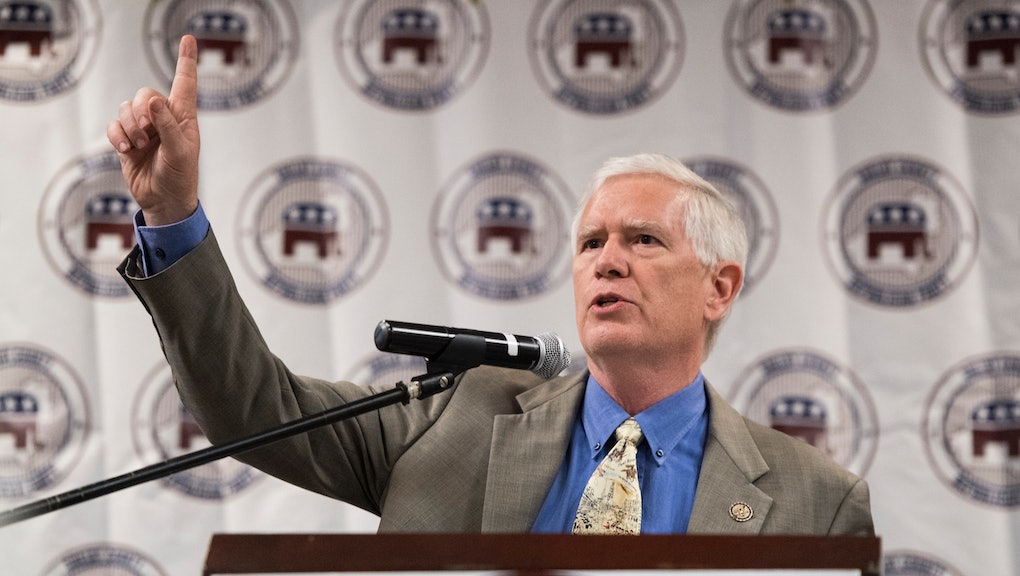 GOP Rep. Mo Brooks totally gets why you'd want to blow up the Library of Congress

The hours-long standoff between Capitol Hill police and a man claiming he had an explosive device in his truck parked outside the Library of Congress ended without incident Thursday, when the suspect surrendered himself to authorities in the early afternoon.

The man, identified as Floyd Ray Roseberry, had initially streamed his bomb threat on Facebook Live before the platform blocked the broadcast. At various points during his stream, Roseberry directly addressed President Biden, claiming at one point "When the patriots come, your ass is in trouble," and later saying "the revolution is on." According to extremist researcher Emily Gorcenski, Roseberry's Facebook account had liked a number of right-wing subjects, including a "White Lives Matter" page and that of the Southern Poverty Law Center-identified anti-immigrant hate group FAIR.

Despite the fairly obvious nature of Roseberry's threat, and the broad right-wing philosophy apparently behind it, Alabama Republican Rep. Mo Brooks — arguably the dumbest man in Congress — saw fit to chime in, wholly unbidden, about what he saw as the three most important things to know in the midst of this attempted terrorist attack:

2) that he, Mo Brooks, completely understands why someone would threaten to blow up a pickup truck full of explosives outside the Library of Congress;

3) that he, Mo Brooks, believes "America is at risk" from "dictatorial socialism."

Here is Brooks's statement, released before Roseberry had surrendered, in full:

Hamfisted syntax aside, let's zero in on this sentence:

Although this terrorist's motivation is not yet publicly known, and generally speaking, I understand citizenry anger directed at dictatorial socialism and its threat to liberty, freedom, and the very fabric of American society.

Brooks here is either admitting that he "understands" and empathizes with Roseberry's aims — or — he's allowing for the fact that Roseberry's aims might not be about freedom and liberty and the "very fabric of American society," but that he, Mo Brooks, does empathize with potential militants who are interested in those things.

Either way, it's basically a not-so-tacit endorsement of the sort of anti-government sentiment that led to the Jan. 6 insurrection, and which, by all indication, is what prompted Roseberry to drive from North Carolina to Washington, D.C. and threaten to blow up several city blocks. Even Brooks's hedging — urging "patriotic Americans to fight back" at the ballot box — is couched in the same sort of "read between the lines nudge-nudge-wink-wink" call to arms that preceded the Capitol insurrection, for which he is now set to stand trial as a defendant for his role in instigating.

Which is all to say that Mo Brooks might very well be the dumbest person in Congress, but that doesn't mean he's not also one of the most dangerous, as well.