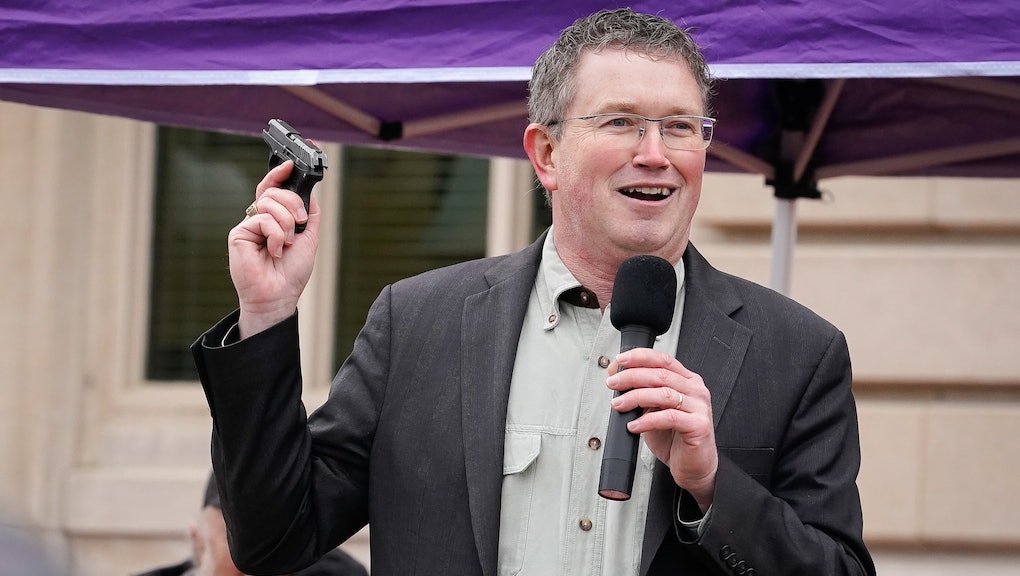 These are dark and trying times for the nation. As coronavirus sweeps across cities and states with no sign yet of slowing, people from every walk of life are left worrying about their health, finances, and futures. All the while, lawmakers in Washington have haggled over a massive spending bill to ostensibly prevent America from collapsing in on itself — a bill which, taken alone, is just as likely to simply keep the wheels on the wagon for a few months more without actually fixing anything. It is this moment of biological fragility, economic uncertainty, and political dysfunction which Thomas Massie, the Republican congressman for Kentucky's 4th District, has chosen for some political strategery.

On Friday, Massie — a man considered by his colleagues to be too unpredictable for even the far-right Freedom Caucus — proudly anointed himself the single most obnoxious obstacle to a $2 trillion coronavirus relief bill in an 11-part tweeted statement declaring his intent to force the House of Representatives to prove it has the requisite quorum present in the room to pass the measure.

In other words, while much of House business is done with a simple unanimous consent vote, or voice vote, Massie has chosen this time of social distancing amidst a pandemic to essentially force his colleagues to 1) travel and 2) assemble en masse, in order to pass a bill designed to stop America from imploding.

Suffice it to say, Massie's stunt has not won him any new friends — including President Trump, who took time off from tweeting about how popular and successful he is to send out a genuinely funny missive against a member of his own party.

Funnier still is the fact that former Secretary of State John Kerry — with whom Massie has uncomfortably, hilariously clashed before — decided to kick the congressman when he was already down, declaring him "an asshole" who should be locked away "to prevent the spread of his massive stupidity."

And then, because we're truly living in the end times where up is down, black is white, and logic and reason hold no meaning, we got ... this:

Peace in our time. Republicans and Democrats coming together to enthusiastically dunk on Thomas Massie.

Oh, and the bill? It passed.