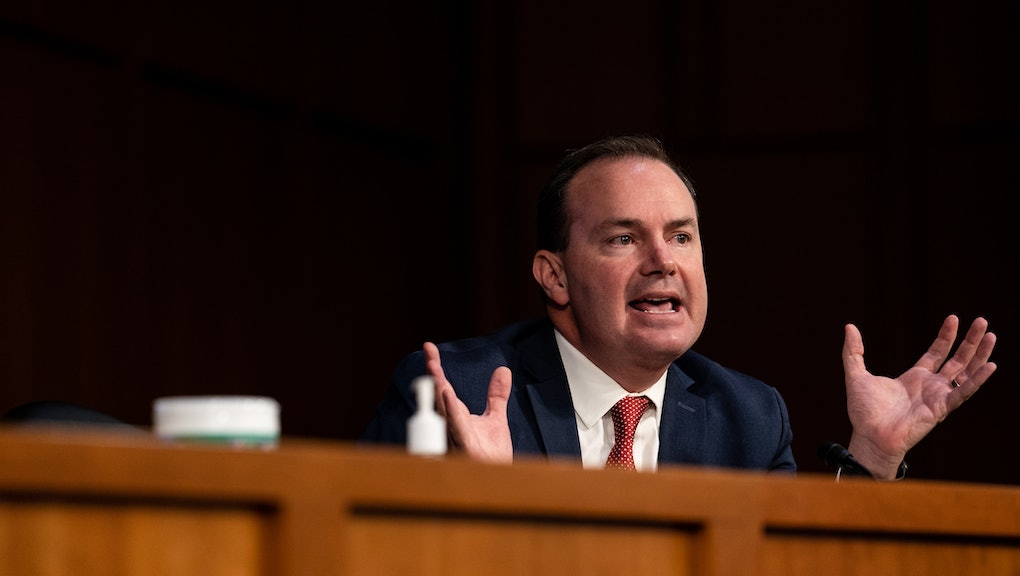 Perhaps I missed the part of Schoolhouse Rock's iconic "I'm just a bill" lesson where it explains that legislation aimed at fighting decades of GOP voter suppression tactics was forged in the infernal fires of Sheol by Lucifer himself. Thankfully, Utah Republican Sen. Mike Lee is here to set the record straight.

Speaking on Fox News on Wednesday morning, Lee railed against H.R. 1, the sweeping voting rights legislation passed by last week in House, calling it "rotten to the core" and "as if written in hell by the devil himself" — spicy words, considering the bill does all sorts of infernal things like "expand voter registration" and "prohibit members of the House from serving on the board of a for-profit entity." Truly diabolical stuff.

This takes all sorts of decisions that the federal government really has no business making — it takes them away from the states, makes them right here in Washington, D.C., by Congress. Apparently in an effort to ensure an institutional, revolutionary Democratic Party of sorts, one that can remain in power for many decades to come.

To understand why Lee is so wound up, look no further than Georgia, where this week the Republican-controlled state Senate passed a cavalcade of bills to restrict, limit, and ultimately suppress the very same avenues of voting that helped deliver the state to Joe Biden in the 2020 presidential election. And Georgia is just one of more than two dozen states where Republican lawmakers are pushing similar voter suppression efforts, which often target the mail-in and absentee voting that benefitted Democrats in 2020 amid a raging pandemic, but over time will likely have roughly equal benefit. H.R. 1 would likely head off many of those those state-level efforts at the pass.

Additionally, as has essentially been admitted by Republican officials for years, these efforts are largely predicated on the understanding that in order to maintain its minority rule, the GOP has to do everything it can to manipulate the electoral system in its favor, including limiting who can vote, where, and how. Of course, attempting to establish a party that "can remain in power for many decades to come" is what Lee is accusing Democrats of working toward — a particularly Trumpian reversal that's become commonplace within the GOP.

Beyond the protections the bill aims to apply on expanded voting, H.R. 1 also has a number of sections devoted to strengthening various congressional ethics and fundraising rules, such as "requiring additional disclosure of campaign-related fundraising and spending, requiring additional disclaimers regarding certain political advertising, and establishing an alternative campaign funding system for certain federal offices." Given Lee's past troubles with campaign finance issues, perhaps his opposition to the bill is colored as much by personal concerns as well as federal ones.

Regardless, the bill faces stiff opposition in the Senate, where the 50-50 split leaves little room for error or dissent from among Democrats. The whole thing has led to increasing speculation over whether Democrats will move to kill the filibuster — a rule that requires most bills to be passed with 60 votes, instead of 51.