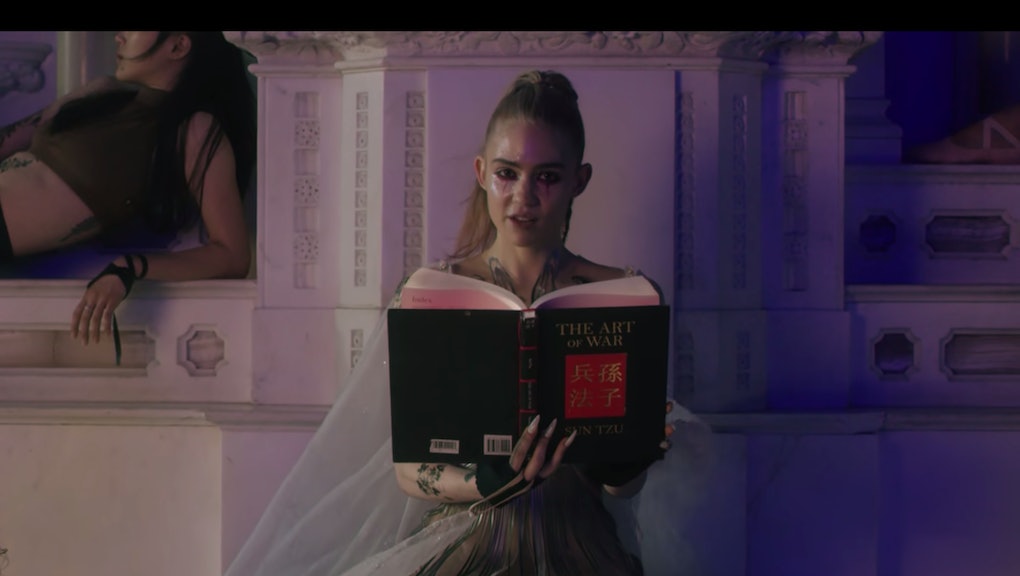 Grimes in the video for "Violence." Screenshot by Mic

The break between Grimes’s third and fourth studio albums, 2015’s Art Angels and 2020’s Miss Anthropocene, seemed endless. In mid-2017, the Canadian-born musician promised new music that, like so many major stars of late, seemed to never come. "In the studio every day trying to legit make something you've never heard before,” she wrote on Instagram. The musician estimated she needed "another month or 2 of pure unadulterated creativity at which point I will begin finishing tracks."

Cut to two and a half years later and Miss Anthropocene has finally arrived. And as it turns out, it was worth the wait.

The album is like a sonic jigsaw puzzle, layered with reality and lore. It’s a concept album about climate change, with Grimes playing a misanthropic goddess relishing humanity’s demise. At the same time, its lyrics contain deeply personal meditations on depression and self-destruction.

Almost a year ago, Grimes told The Wall Street Journal that she intended to make global warming “fun” — as a way of forcing people to give a shit. “People don’t care about it, because we’re being guilted. I see the polar bear and want to kill myself,” she said. Her solution: make the album’s protagonist a villain — a powerful deity encouraging our species to self-destruct and have fun while doing so.

Grimes coupled up with billionaire inventor Elon Musk in 2018, much to the dismay of a number of fans who object to Musk's labor practices. The drama of it all has made Grimes something of a pop villain.

“Without me doing anything, just by random association with other people, I’ve watched my career and my reputation get totally f–king smashed,” Grimes told Crack magazine last year. “If I’m stuck being a villain, I want to pursue villainy artistically. If there’s nothing left to lose, that’s actually a really fun idea to me. I think it has freed me artistically.”

This playful nihilism suffuses the entire album, but it's on display especially in tracks like "My Name Is Dark," which begins with this ominous couplet: "So, we party when the sun goes low / Imminent annihilation sounds so dope." Grimes told Genius that line epitomizes the feeling of being so depressed you're at the point of "truly not giving a fuck." She said when the darkness sort of implodes upon itself, that's when things get fun, likening it to the draw of Todd Phillips' Joker.

Grimes labored over Miss Anthropocene for years, perfecting every minute detail. “I have always produced all my material on my own, it’s a huge part of my artistic identity,” she told The Face recently. “But when I make the whole beat and then do all the vocals, I end up spending hundreds of hours on a song. It’s exhausting and ruins the magic. That’s why it was so hard to finish this last album.”

On an episode of Mindscape, a podcast by theoretical physicist Sean M. Carroll, Grimes posited that one day, AI would be far better at producing great art than humans. "I feel like we're kind of in this amazing time where we may be like the last artists ever," she said, "which feels fun."

As a result, songwriter Zola Jesus called Grimes the “voice of silicon fascist privilege” in a now-deleted tweet; Grimes’s ex-partner Devon Welsh likened her comments to “propaganda” on Twitter and reposted a video of Musk unveiling his Cybertruck last November. "Is this where we want to be going?" Welsh tweeted. "Are these our idols? Is this a future for everyone? Or just the wealthy few?"

Grimes seems baffled, or at least annoyed by, all the hand-wringing over her words. "I care about the future of art, why not speculate on it?" she tweeted at the height of the shitstorm. "Seems weird to withhold ideas, and even weirder that suggesting potential futures can cause so much rage."

The funny thing is, there’s perhaps no better case for human artistry than Grimes herself. She’s a bonafide musical savant, channeling influences as diverse as Mariah Carey and Smashing Pumpkins into pop-electronica that, in theory, should be dense and unlistenable but is somehow infectious. It’s wild that her critics, myself included, have fixated on Grimes “selling out” and going to the “dark side” through her association with Musk.

The new album grapples with some of the biggest existential questions of our time; for example, on Miss Anthropocene's second track, "Darkseid," Grimes repeatedly chants, "Unrest is in the soul, we don’t move our bodies anymore." It's a meditation on what happens when our human bodies, decaying organic masses of flesh and bone, no longer serve us in a digitally-dominated world — a concept she's exploring with the help of her avatar, WarNymph, too.

There aren't easy answers to the challenges currently facing humanity. That said, maybe there's no one better to philosophize about the future than a visionary artist with unparalleled access to Silicon Valley’s most ambitious tech mogul.

More like this
How “stoopers” turned New York City sidewalks into trendy, sustainable thrift shops
By Jasmine Vojdani
'Paddington 2' has officially ousted 'Citizen Kane' as the greatest film of all time
By Kara Weisenstein
More damning proof Jake Paul is the worst
By Kara Weisenstein
Stay up to date