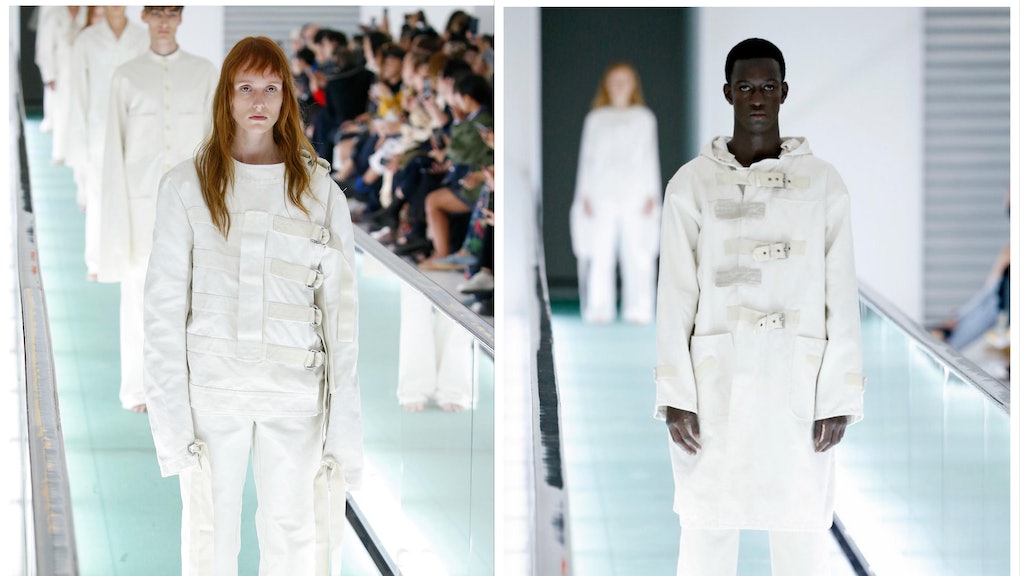 Gucci's 'straitjacket' stunt tried to be provocative, but missed the mark

The world of fashion is always rife with controversy. In the quest to push boundaries, many designers seem simply to offend. This is the case with Gucci’s latest spring/summer 2020 presentation in Milan, which opened with models walking down the runway in white restrictive garments that most people would see as a version of straitjackets. Yes, you read correctly — straitjackets.

According to the New York Times, when the lights went up at the Gucci runway show, a fleet of models walked down the runway with every possible iteration of the straitjacket hung off of them. Straitjacket jumpsuits, dresses, and shirts. The inclusion of the apparel was aimed to send a message, according to Gucci’s creative director, Alessandro Michele.

“I wanted to show how society today can have the ability to confine individuality and that Gucci can be the antidote,” Michele told the New York Times. “For me, the show was the journey from conformity to freedom and creativity. Uniforms, utilitarian clothes, such as straitjackets, were included in the fashion show as the most extreme version of restriction imposed by society and those who control it. These clothes were a statement for the fashion show and part of a performance.”

The plain white and cream straitjackets gave way to the type of brightly colored, maximalist clothing and accessories that Michele has become known for. But before that happened, one model held their hands up in protest of the item being used as a fashion statement. Ayesha Tan Jones, who identifies as non-binary, had “Mental Health is Not Fashion” written across both of their hands.

In two Instagram posts, Jones explained how the moment came from an urgent need to speak out against a flattening of mental health discourse with blasé use of something as severely significant as a straitjacket. “It is hurtful and insensitive for a major fashion house like Gucci to use this imagery as a concept for a fleeting fashion moment.”

“I want to use this opportunity to remind people that this sort of bravery, is only a simple gesture compared to the bravery that people with mental health issues show every day,” Jones wrote in an Instagram post. “To have the bravery to get out of bed, to greet the day, and to live their lives is an act of strength, and I want to thank you for being here and being YOU !”

Jones and other models in the show donated a portion of their fee to mental health charities.

Others in the fashion community didn’t find Gucci’s use of straitjackets necessarily offensive. Model and actress Hari Nef was in attendance at the show, and on Instagram, she wrote that she found the upsetting imagery of the straitjackets as thought-provoking.

“The clinical whites that opened the show were upsetting—willfully: more a provocative reminder of submission than a glamorization of insanity,” Nef wrote. “Clothes, perhaps, aren’t there to free anyone. fashion certainly isn’t, nor is it ever free. Today, thankfully, it felt dangerous.”

Whether the straitjackets provoked deeper thought isn’t unfounded. It’s hard not to form a response to such visceral imagery. But the question that Jones raises is whether something with such a loaded and violent history should be used to instigate thought in a room full of fashion elite? The world of fashion seems to be grappling with that question with increasing frequency. One designer introduced a line of school sweatshirts riddled with bullet holes in hopes to be similarly provocative.

According to the Times, Gucci allowed Jones’ protest because the entire concept behind the show was connected to the idea of liberation. But perhaps being permissive of Jones’ protest, oas opposed to considering its message, further signified that they were missing the point.

More like this
'Exterminate All the Brutes' is a messy, ambitious documentary that ties together genocide, white supremacy, colonialism ... and Josh Hartnett?
By Nicholas Russell
March Madness might be over, but the fight for gender justice continues
By Lindsey Darvin, Anita M. Moorman and Ann Pegoraro
Gen Z can't believe you crusty millennials are still watching TV
By Kara Weisenstein
Stay up to date