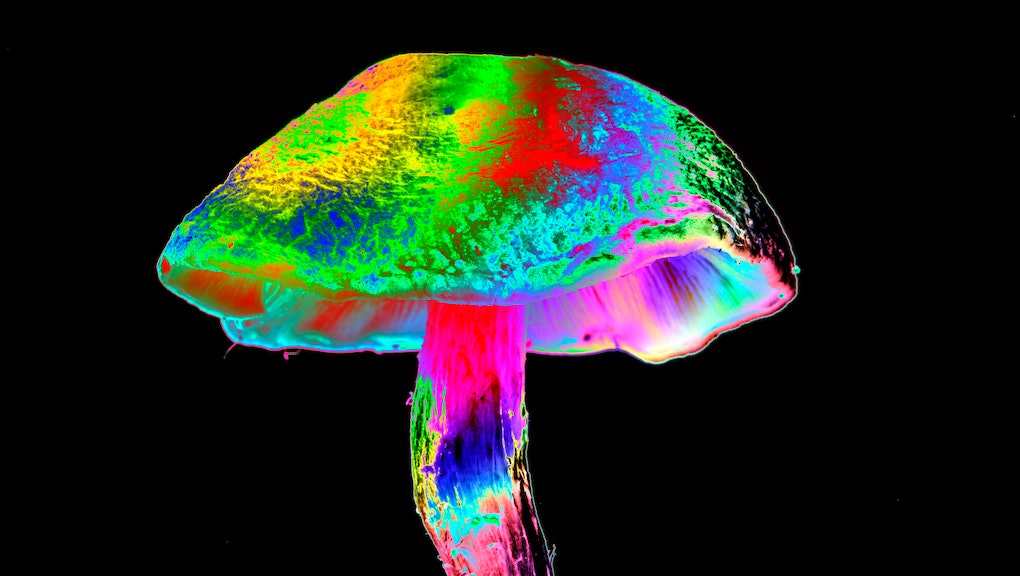 Having a bad trip? This hotline can help you find your chill

Psychedelics may have a rep for making you feel warm and fuzzy, but tripping can also be intense, even terrifying at times. Psychedelics might resurface past trauma, and a study suggests that DMT, the compound found in ayahuasca, can create the sensation of a near-death experience. Even if you're not in any immediate danger, the only solution that might come to mind when you're having a bad trip is to call 911. But starting Wednesday, April 14, you'll have another option: calling or texting San Francisco-based nonprofit Fireside Project's Psychedelic Peer Support Line.

Fireside Project creator Joshua White tells Mic that the service won’t be merely a hotline, which implies that it would be for emergencies only. Peer volunteers will provide free, confidential support not only to people having their own psychedelic experiences — even lovely, not-scary ones, according to the nonprofit's website — but those trip-sitting for someone else. Those who contact the line can also opt for weekly follow-up calls as they integrate, or draw insights from, their psychedelic experience, White says.

Peer volunteers will support people in integrating their past psychedelic experiences, too. “Maybe they had an experience, and they didn’t have any friends to talk to about it,” White explains. “Maybe they talked to their therapist and had been pathologized.”

A service like the Psychedelic Peer Support Line is especially important now, as more jurisdictions across the country ease restrictions on psychedelics, he says. A handful of cities, including Denver and Oakland, have passed some form of psychedelics decriminalization legislation, per Rolling Stone. Oregon legalized psilocybin therapy last November, the magazine points out, and other states are also working on bills to permit psychedelics to varying degrees.

“A wave of decriminalization of psychedelics is sweeping across the country and it is, I think, irresponsible to have decriminalization without robust risk reduction services,” White says. “Part of our core mission is to help people minimize the risks of their psychedelic experience.” One way the Fireside Project can do this is by supporting people during their psychedelic experiences so they won’t need to call emergency services, he explains.

To be clear, though, if a person is in immediate danger to themselves or others, they should call emergency services, not the Psychedelic Peer Support Line, White says, adding that “we provide peer support only, not medical advice or assessment.” That said, “sometimes people just need to be supported during their experience by a peer, someone who has been there before and gets it, and then emergency services may not be necessary.”

White traces the concept of the Psychedelic Peer Support Line to his own psychedelic experiences about 15 years ago, which led to his decision to transition from a career as an attorney to one as a psychedelic therapist. During that exploratory process, he volunteered for the Multidisciplinary Association for Psychedelic Studies (MAPS) Zendo Project, which offers psychedelic harm reduction services at music festivals and other events, and the nonprofit Safe & Sound’s TALK Line, which parents are encouraged to call when they need emotional support. Both experiences were integral to shaping White’s vision. He recalls the TALK Line offering weekly follow-up calls with clients, much like the Psychedelic Peer Support Line will do.

As the West Coast burned and protests against police violence spread across the U.S. last year, White says he “had this very palpable sense that the world was ripping apart at the seams.” He wanted to devote himself to what he believed held the most hope for it — psychedelics — and cofounded Fireside Project with Hanifa Nayo Washington, Adam Rubin, and Nicholas Lassen.

In the midst of the country’s reckoning with its institutional racism, White sought to make the psychedelic movement more inclusive through creating a support line that would aim to reach out to all communities, and recruit volunteers from all communities. “So many of the people in our society who could really benefit from psychedelics have been excluded from that movement,” White says. As Mic previously reported, that’s thanks largely to a law enforcement and justice system that disproportionately targets Black and brown communities for drug use.

“I thought [the Psychedelic Peer Support Line] could be a wonderful way to create a pipeline into graduate studies for people who have been historically marginalized from the psychedelic movement,” White says. He hopes Fireside Project could even assist in funding their graduate education.

White notes that your text message or call will get routed to a someone who'll connect you with an available peer volunteer. A supervisor can step in if it turns out that you and a particular volunteer end up not being a good fit.

“Our primary goal is to meet people where they are,” White says. “We acknowledge that different methods of communication are better for different people and at different times.” You might be having a profound trip at a concert and want to know if someone’s out there supporting you, in which case you might text the Psychedelic Peer Support Line, “Is someone there?” Maybe you start out texting the support line and decide to switch to a phone call later.

If someone calls about a friend who's freaking out as they trip, White says a volunteer would validate the stress the trip sitter might be experiencing and if necessary, walk them through whether they should call 911. For a friend simply tripping alone in their room, they might suggest pillows or stuffed animals. “It really just depends on what is happening in the moment for the trip sitter and the voyager,” White says.

The goal isn’t to guide people toward certain insights, but to validate their experiences and “[create] a safe container full of understanding and compassion so that others can do the work themselves.”

Clients who reach out in the midst of their own trip have the option of weekly follow-up calls with a volunteer, which can help them integrate their experience, he explains. They can also call the Psychedelic Peer Support Line if they still need to unpack a past trip. Given that psychedelic experiences can be deeply spiritual, this process can take time, White says. The goal isn’t to guide people toward certain insights, but to validate their experiences and “[create] a safe container full of understanding and compassion so that others can do the work themselves.”

The approximately 30 Psychedelic Peer Support Line volunteers — selected from a pool of more than 200 applicants — encompass a broad spectrum of ages, races, genders, sexual orientations, and other backgrounds, White says. Each has undergone a 36-hour training program developed by Fireside Project that includes presentations on topics ranging from active listening to psychedelic emergencies, as well demonstrations and roleplaying exercises.

Fireside Project is building out its software functionality to eventually enable clients to request volunteers with identities similar to their own, White explains — BIPOC clients processing racial trauma, for instance, might prefer to speak with BIPOC volunteers. Also as part of Fireside Project's effort to build a more inclusive psychedelic movement, cofounder and Cultivator of Beloved Community, Hanifa Nayo Washington, focuses on forming relationships between Fireside Project and other communities, as well as creating a culture of belonging within the organization. The fact that the Psychedelic Peer Support Line is free also broadens access to support for psychedelic experiences, White says.

Later on, anonymized post-call surveys could help establish whether the Psychedelic Peer Support Line is in fact an effective risk reduction tool, he adds. If so, that could make a compelling case for why Fireside Project should be part of jurisdictions that have decriminalized psychedelics.

Although White believes in the power of psychedelics to make the world a more interconnected place, he acknowledges that a difficult trip can leave people feeling utterly isolated. The Psychedelic Peer Support Line could help unlock psychedelics’ potential to bring people together, making those who use them feel safe and held.