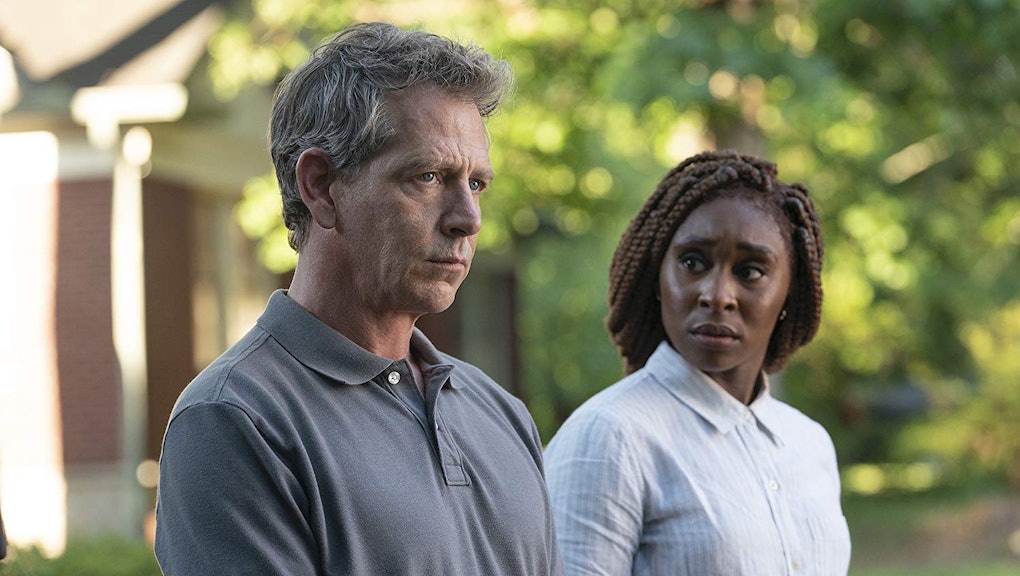 Ben Mendelsohn and Cynthia Erivo in The Outsider (2020) ©HBO

HBO's 'The Outsider' might be the perfect suspense show

The Outsider, a new HBO series based on a Stephen King bestseller, starts like pretty much every other murder mystery in existence. The setting is bleak, beautiful, and Southern, akin to the excellent first season of True Detective.

The opening scene could’ve been lifted from any number of episodes of CSI: a man is walking his dog in a park, past a creepy white van with blood on the door. There’s more blood at the base of a tree. The animal smells something and breaks from its leash, bounding through the woods to investigate.

We, the viewers, already know what comes next. A young boy is dead. His body is brutally mutilated, with deep, human bite marks tearing through the flesh. It’s an unfathomable crime. But from the opening moments of The Outsider, Detective Ralph Anderson (Ben Mendelsohn) knows who perpetrated the crime… or at least he thinks he does.

The first episode bounces back and forth in time from the discovery of Frankie Peterson’s body to the arrest of the main suspect in his murder, Terry Maitland (Jason Bateman), the local little league coach. We see Ralph interviewing witnesses. Terry was spotted picking Frankie up in a white van; later, a kid saw him at the park, covered in blood. His fingerprints — 70 of them — are all over the van and Frankie’s body. So is his saliva.

Pretty quickly, the cops have enough solid evidence to arrest their prime suspect. And Ralph does it in high style, cuffing Terry in the middle of a big game, in front of a crowd of 300 people, including his wife and kids. It’s traumatic. “You just ruined our lives,” Terry tells Ralph, as the cop car pulls away. And he’s right.

But as the wheels of justice start turning, the cut-and-dried case gets really weird. The cops have Terry on video all over his hometown of Cherokee Creek, Georgia, the night of the murder. But then another video of the coach emerges, showing him attending a teachers’ conference in Cap City, an hour away, at the exact same time. How could he be in two places at once?

This is the central mystery of The Outsider — not who killed Frankie Peterson, per se, but what sort of evil, metaphysical fuckery is afoot. It’s what ultimately makes The Outsider so effective and creepy, like the best of Stephen King’s horror ouvre.

Spoiler alert: Terry doesn’t even feature into the series after its second episode. But even though Bateman is pitch perfect in the role (pun intended), the story doesn’t need him after his character kicks off its tragic events. Bateman also directed the first two episodes of The Outsider, and his skill is palpable. He captures a harsh, foreboding world on camera, not unlike his work on Ozark.

As the bodies pile up and the cops grapple with the unknown, Bateman’s exit clears the way for Cynthia Erivo’s entrance. Though she’s prominently featured in the series trailer, her character doesn’t appear in the first two episodes of The Outsider. (Screenwriters reportedly condensed the plot of the first half of King’s novel in order to introduce her character, Holly Gibney, a little sooner.) Erivo plays an investigator willing to embrace a supernatural explanation for what’s going on. Meanwhile, a hooded figure with a busted face keeps lurking near the scene of tragic events. Is this “The Outsider?”

I’m eagerly awaiting the next installment in the series, mostly because I feel like I have no idea where the story will go next. (I haven’t read King’s novel, for what it’s worth.) By getting all the predictable crime tropes out of the way, fooling us into thinking we know the answer then making it clear pretty quickly that nobody knows shit, The Outsider set itself up with a lot of narrative freedom. It’s the spookiest, most creative show I’ve watched so far this year.