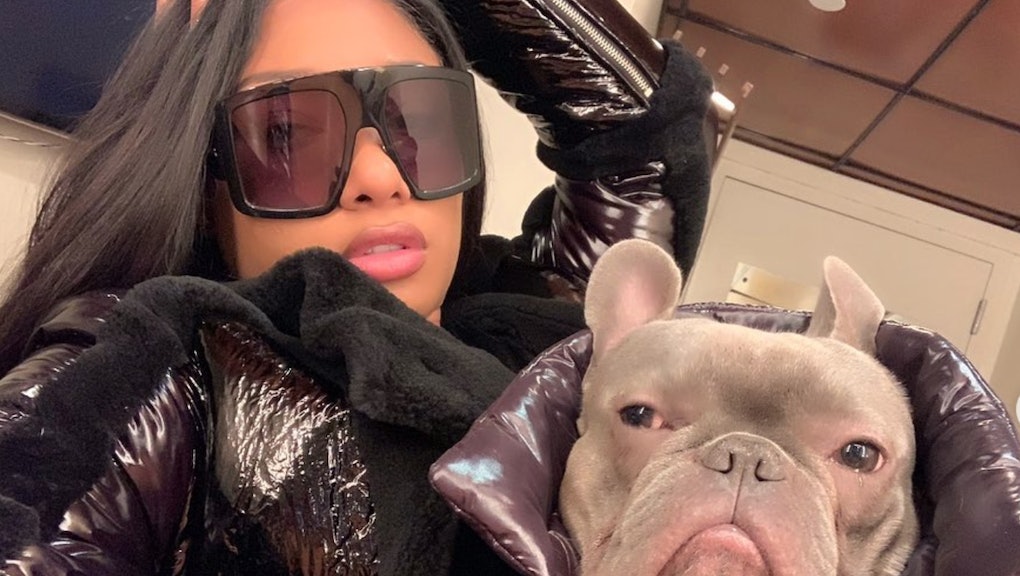 Times are undeniably fraught! It’s hard to pay attention to much else besides the election and coronavirus and police brutality. That’s why it’s important to celebrate the things that bring you joy. And this week, what’s unexpectedly soothing my psyche is Megan Thee Stallion’s two dogs, 4oe and Dos.

True “Hot Girl” stans have been hip to the superstar rapper’s “hot dogs” for a while. Meg’s elder pup, 4oe, a grey French Bulldog with plenty of attitude, has his own wildly popular Instagram account. Her new Frenchie puppy, Dos, makes lots of cameos on his “brother’s” page, as well as Meg’s main socials. Admittedly, I’m new to the revelation that Megan Thee Stallion, a national treasure who must be protected at all costs, is also a doting dog mom. But that’s made scrolling through 4oe’s Instagram, catching up on the trio's high-class hijinks, all the more rewarding.

Firstly, it's important to point out that 4oe appears to be a furry genius, intelligent enough to shake his head "no" when he's not into something. Take Meg's recent post on her own Instagram of 4oe declining to descend the steps of a private jet. The head shake is subtle, but it's there. In another post on 4oe's account, Meg offers the pup some vegetables and he shuts her down. Hey, maybe it's a tic, but I prefer to believe 4oe's a verbal pupper who's learned how to communicate with his famous owner.

Meg added Dos to her furry family this May, forcing 4oe to share the spotlight. The sandy-colored Frenchie puppy is undeniably adorable, but he hasn't quite mastered pouting for the camera like 4oe has. Look at this "wet ass puppy" mugging in Meg's arms while on a boat. He's the luckiest pup in the world!

Honestly, I think I'm mostly jealous of 4oe and Dos and their lavish lifestyle. These pups own more couture than I can possibly hope to amass in one lifetime. They get to jet all over the world, making cameos in Meg's music videos and interviews. The rapper clearly dotes on her dogs, but what's extra compelling about their online presence is how silly it is. Meg's irreverent, unfiltered personality shines through in every post and, frankly, makes being her dog look pretty darn fun.

Which is why I've simply gotta ask: Megan Thee Stallion, would you consider adopting me next?