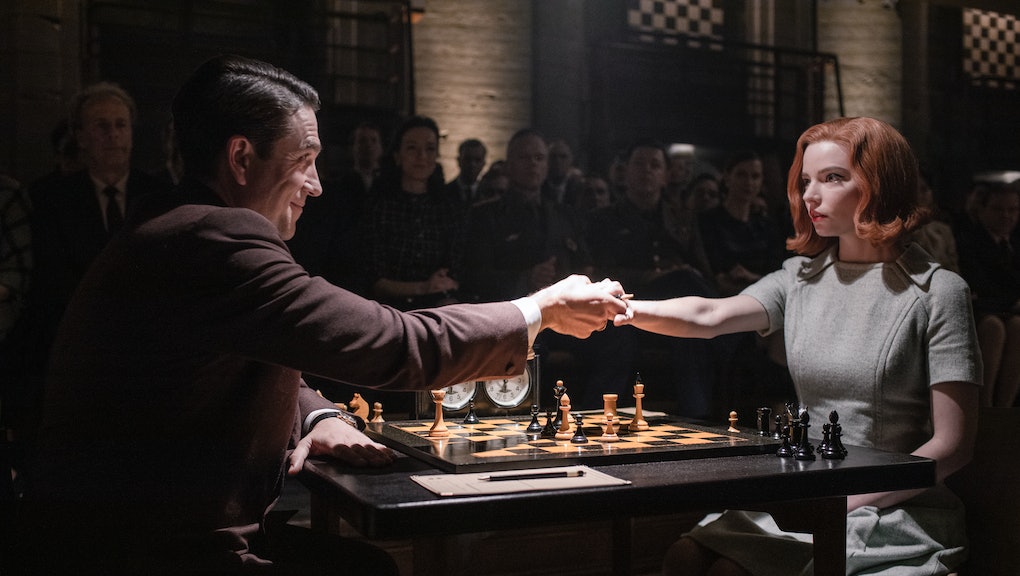 (L to R) Marcin Dorocinski as Vasily Borgov and Anya Taylor-Joy as Beth Harmon in 'The Queen's Gambit.' © PHIL BRAY/NETFLIX 2020

Here's what 'The Queen's Gambit' gets right, according to real female chess stars

The Queen’s Gambit got me hooked on chess. It’s a sumptuous TV series, too, and you don’t have to know a thing about the game to enjoy watching Beth Harmon’s transformation from woebegone orphan to unbeatable prodigy. I’d guess that The Queen’s Gambit is doing for chess what Game of Thrones did for medieval fantasy, another nerdy pastime. With everyone stuck indoors avoiding coronavirus this winter, droves of new players seem to be flocking to the sport. Yes, chess is considered a sport.

The Queen’s Gambit isn’t about a real female chess marvel from the 1960s; the Netflix series is based on a fictional 1983 novel of the same name. The closest historical equivalent we have to Harmon is Hungarian player Judit Polgár, who was at her peak in the 1990s and early 2000s. Polgár unseated chess champ Bobby Fischer for the title of world’s youngest Grandmaster in 1991, when she was just 15 years old. In 2002, Polgár was the first woman to beat then-World Champion Kasparov, much like how Harmon bests her Russian rival Vasily Borgov in the series. She hasn’t been active in the competitive chess scene since 2014. But she has seen The Queen’s Gambit and recently told The New York Times that Anya Taylor-Joy’s “incredible performance” as Harmon gave her déjà vu.

There’s a whole lot The Queen’s Gambit gets right about chess. “It’s just so beautiful to watch. For a chess player, it’s a show that you can watch twice,” Woman Grandmaster Jennifer Shahade told Mic. “The first time you watch it just like any normal person does, for the drama and the acting. And then the second time, you get to watch the chess boards because they’re from famous games, a lot of them.”

The show took pains to make sure that was the case: celebrated chess coach Bruce Pandolfini did most of the heavy lifting by creating a bible of games and plays that mapped to the arc of the story. And Garry Kasparov, one of the greatest chess players of all time, checked Pandolfini’s work and even designed moves for the most significant games in the series. It’s hard to capture the atmosphere of a chess tournament for TV with complete accuracy. “But trust me, this is as close as one can have it,” Kasparov told The New York Times.

The Queen’s Gambit has also been lauded for its lack of misogyny — every man Harmon inevitably beats in the series treats her like a worthy opponent. Many of them end up helping her on her journey. But Polgár said this was one aspect she couldn’t identify with: the men were too nice. “There were opponents who refused to shake hands,” she told the Times. “There was one who hit his head on the board after he lost.” Again, we’re talking about the 1980s and ‘90s here, not even earlier in the 1960s.

Thankfully, a lot seems to have changed in a relatively short span of time. Grandmaster Irina Krush, the current U.S. Women’s World Champion, told Mic she’s just seven years younger than Polgár, and while the reality of her childhood in the early ‘90s was almost exclusively playing older men, she never felt punished for being a female chess prodigy. “People were not, like, putting me down or putting obstacles in my path for being a girl,” Krush explained.

“As a chess player, if you don't have an objective assessment of what's going on on the board, you're putting yourself at a disadvantage,” she continued. “Guys will see from your moves how you play. It's not to their advantage to minimize that, belittle you."

She credited Polgár’s trailblazing, just a few years before she started playing competitively, for charting a path for other women in chess. “When I was playing, probably the men around me were already more used to this idea, because Judit had passed through,” Krush said. “I was the very next generation, and already my path was much easier.”

So what else does The Queen’s Gambit get wrong and right about chess? For one thing, Krush told me it’s virtually impossible to be instantly proficient at the game, as Harmon is shown to be. “They want to show her as being really good at chess, as a winner. But they don't have the time to show how much you have to lose to get that good,” Krush noted. “Losing is not incompatible with being a chess prodigy.”

I had assumed the show took creative liberties with another depiction of Harmon’s process: the way she visualizes the board on the ceiling over her bed at night, puzzling out chess problems. Actually, Shahade told me that chess is extremely visual: artist Marcel Duchamp was a great player and famously compared the game to a film that unravels in your head. “Brilliant chess players do tend to look up at the ceiling or look around when contemplating moves,” Shahade explained. “And it’s because sometimes they’re thinking of a variation so long that the pieces themselves can be a bit distracting, so it’s actually easier to visualize the board elsewhere.”

Shahade noted that it’s actually possible to learn chess along with Harmon while watching The Queen’s Gambit. She walked me through the first game that Beth loses to her mentor, Mr. Shaibel, in the series. “Can you think of how she might block his Queen instead?” Shahade quizzed me. I guessed moving a Knight in front of Beth’s pawns. “Exactly!” my coach crowed. “And that’s what [Beth] was looking at on the ceiling, after.”

Playing chess lifted from the show felt empowering, like I could rise to Harmon’s level with enough focused practice. That’s one of the things The Queen’s Gambit does so well: balance entertainment with real strategy. Chess fanatics are already making YouTube videos to dissect the moves shown in the series. Kasparov did a virtual master class for girls across the country recently, showing them a few of the games he scripted for the show.

“People who love this series can really go down the rabbit hole and study chess inspired by the show,” Shahade said. And it's possible that The Queen’s Gambit inspires more people to brave the male-dominated world of chess — or other spheres where they might stand out. “The series makes a strong, inspirational case for believing in yourself, even if you're not like anybody else."