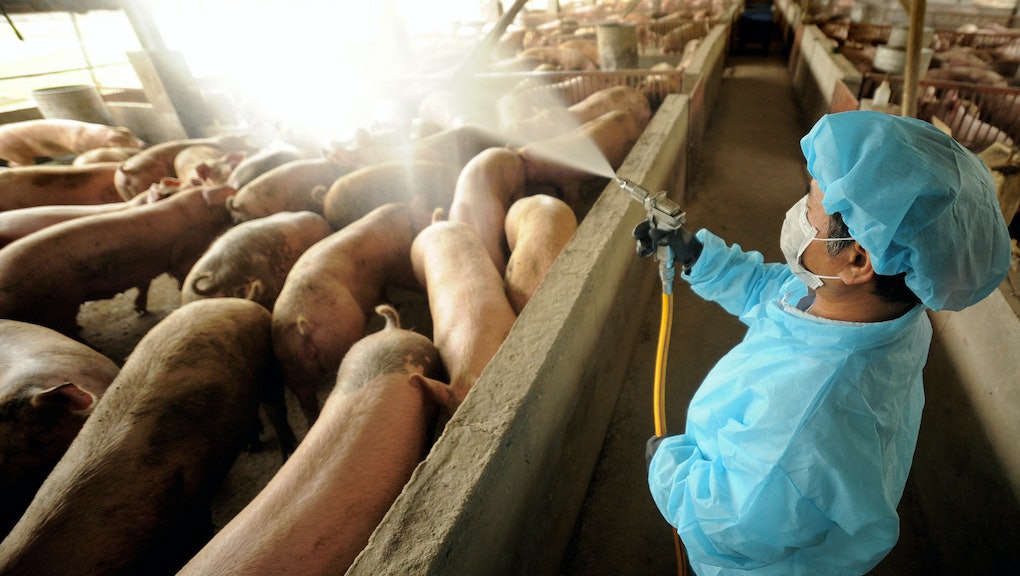 Here's what we know so far about the "new" swine flu

In the U.S., we’re still grappling with our first wave of COVID-19, dealing with hospital overcrowding, and even seeing some parts of the country which have reopened and then closed again due to new infections, signaling how unprepared the country (*cough* its leadership, specifically) was to deal with a pandemic. That’s why, when on Monday, Chinese researchers announced that they discovered a new type of swine flu that has the potential to cause another pandemic, everybody on Al Gore’s Internet started freaking out. This reaction is completely understandable, of course, but don’t build that bunker just yet.

First, the findings: Chinese researchers who conducted the study, published in scientific journal Proceedings of the National Academy of Sciences (PNAS), identified this new threat as the G4 virus. It’s genetically linked to the 2009 H1N1 swine flu, which wreaked havoc on the U.S. during its tenure.

From 2011 to 2018, scientists collected more than 30,000 nasal swab samples from pigs in slaughterhouses and veterinary teaching hospitals across 10 Chinese provinces, CNN reported. From this, the researchers identified 179 swine influenza viruses — which sounds jarring, but not all of them pose a concern, experts assert. Keep in mind that most of these viruses only showed up in one year out of the seven, or declined to benign levels by the end of the study. G4, however, stuck around, even showing an uptick in porcine infections after 2016.

The G4 is what the science-literate call a strain, and it can jump to humans, as all H1N1 viruses have the potential to. In fact, it already might have: According to a survey cited in the PNAS study that was conducted from 2016 to 2018, G4 antibodies were found in 10% of farmworkers surveyed, which means those people were exposed to the virus (but didn’t necessarily get sick).

Furthermore, the survey found that unlike the coronavirus, which has affected the elderly much more, this G4 virus has the propensity to infect 18- to 35-year-olds at a higher rate, the New York Times reported. All this information is concerning, but the pool of people tested for this survey (338 farm workers) was a relatively small one. The researchers did, however, find that G4 can infect humans by “binding to our cells and receptors” and that it can replicate quickly inside our airways, which sounds frighteningly similar to the novel coronavirus.

Right now though, G4 has only been transmitted to humans by pigs, and not humans to humans — which was the key factor in the sharp and debilitating rise in COVID-19 infections around the world. Carl Bergstrom, a professor of biology at the University of Washington tweeted that we’re not immanently facing the start of a double pandemic. "This is not a *new* new virus; it's been very common in pigs since 2016," he says. “There's no evidence that G4 is circulating in humans, despite five years of extensive exposure. That's the key context to keep in mind.”

We need to keep an eye on this thing though, because the PNAS study indicates that G4’s inclusion of genes from its predecessor, the 2009 H1N1 pandemic “may promote the virus adaptation” that leads to human-to-human transmission. Therefore, “it’s necessary to strengthen the surveillance” of pigs in China, the authors assert. This will ensure that if it happens, we’ll know sooner rather than later.

Scientists such as Angela Rasmussen, a virologist at Columbia University, are taking these findings with a grain of sal. She wrote an informative Twitter thread after the paper came out, explaining the ins and outs of the paper in layman‘s terms. “I'm seeing a lot of ‘the end is nigh’-type posts as well as a lot of people misunderstanding this story,” she tweets. “We need to keep an eye on it but we should not focus on any one virus exclusively. We should prepare for ANY kind of emerging influenza pandemic.”

Still, other researchers offer less reassuring opinions on whether the G4 virus will rise to the formidability of the 2009 H1N1 virus or COVID-19. “We just do not know a pandemic is going to occur until the damn thing occurs,” said Robert Webster, a former influenza investigator (what a cool title) at St. Jude Children’s Research Hospital to Science. “Will this one do it? God knows.”

More like this
How to embrace body positivity without being ableist
By Melissa Pandika
Should vaccinated people wear masks indoors?
By Peter Chin-Hong
J&J vaccine may be less protective against the Delta variant, new research confirms
By Tracey Anne Duncan
Stay up to date