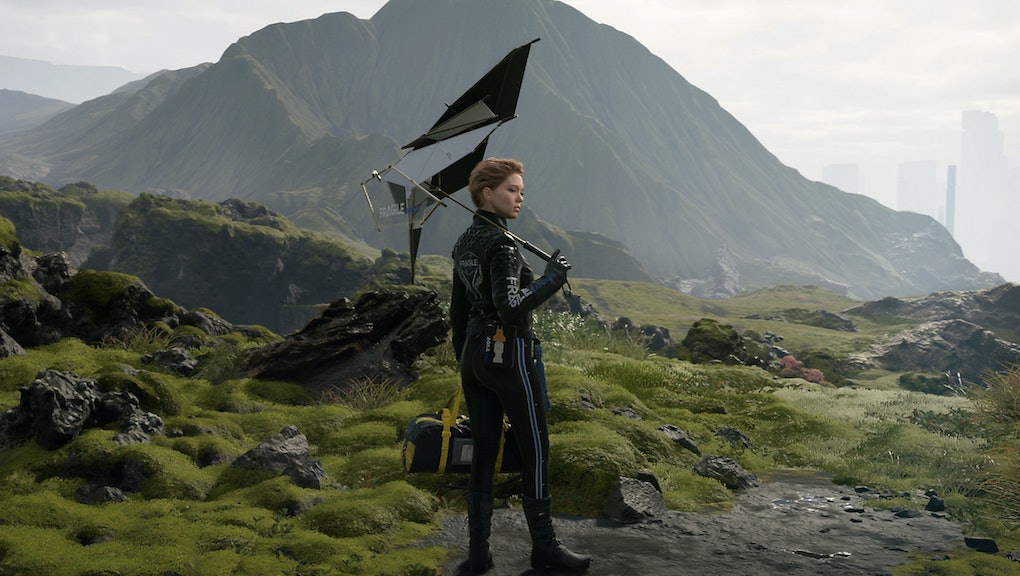 Hideo Kojima, creator of ‘Death Stranding,’ has a long history of out-there games

Whether you're a hardcore gamer or casually follow the latest video game trends, chances are you've heard either the name Hideo Kojima or Death Stranding in the last few months. Death Stranding is one of the most enigmatic games the gaming industry has seen in some time, from the storied creator of the Metal Gear Solid series. The mind-bending, surreal adventure looks like it's going to be par for the course when it comes to games of Kojima's ilk, but even more out there in several different ways (babies in pods are seriously only the beginning).

Kojima's career is notable in that he previously ended a 30-year tenure with Japanese publisher Konami over a falling out over reported "power struggles." In the end, the disagreements ultimately lead to Kojima parting ways with Konami and going on to work alongside Sony with his own independent studio, Kojima Productions. His first title working as the head of Kojima Productions? Death Stranding, of course. He's got another project in the works as well, involving his studio's mascot character Ludens, but we don't know much about that yet at all. All eyes are on Death Stranding right now.

But there's still quite some time left until Death Stranding releases, and plenty of games from the famed creator that you could check out in the meantime. If you're interested in experiencing what Kojima had his hands in prior to Death Stranding, be sure to check out the following games, including the legendary Metal Gear Solid series, which will go down in history as his opus, given that it spans so many games and forms.

This isn't a complete list by a long shot, as Kojima has several other projects, such as P.T. (a playable teaser for the now-canceled Silent Hills that's no longer available to download) and a recent cameo in the recently released Control. But these should act as a primer of sorts to get you going.

This is the game that effectively kicked off Kojima's career. Metal Gear, an action-adventure stealth game, originally debuted in 1987 for the MSX2 computer in Japan, and later on the NES. You took on the role of Solid Snake, a new recruit by the special ops unit FOXHOUND, all lead by the legendary soldier Big Boss. Snake's mission involves him infiltrating the nation of Outer Heaven to find and extract the agent Gray Fox, but that's just the tip of the iceberg. The game took place near the end of the 20th century, though some of the more explicit dates aren't spelled out.

Though seemingly rudimentary, the game is full of satisfying twists and turns, as Big Boss is more than he lets on. Kojima's wit and creativity shone through even in this early game, which laid the groundwork for later entries in the Metal Gear series. It was revolutionary at the time as well, introducing many to their first taste of the stealth genre.

Before continuing on with the Metal Gear series on PlayStation, Kojima stepped away from the gritty military themes he had started with and jumped into the world of cyberpunk. Snatcher is one of his most classic creations, set in a future where humanoid robots called "Snatchers" have been killing humans and taking their place. If it sounds a little like Blade Runner to you, that's not too far off. It also pulled influences from films like the storied anime adventure Akira, to startling effect. It wasn't a stealth game, however, and resembled an adventure game more than anything else.

Players took on the role of amnesiac Gillian Seed, working as a member of a Snatcher-eliminating group in a bid to recall his past. Highly-acclaimed with fantastically-paced storytelling, a hustling and bustling open world, and realistic characters rendered in an attractive and colorful anime art style made Snatcher one of the most exciting games of Kojima's portfolio, but unfortunately it's never been released in English – only fan translations exist.

Following Snatcher's success, Kojima continued to explore the adventure game genre with Policenauts, a science fiction tale that follows Jonathan Ingram, an astronaut floating through space in cryosleep for 24 years. Now that he's been recovered by Los Angeles researchers, he's discovered a new calling: detective work. He travels back to the space colony he originally got into an accident at to figure out the details behind his ex-wife's murder and her new husband's disappearance. Along the way, however, he unravels the secrets behind an organ-trafficking ring and must work to take the organization down. Kojima's excellent writing combined with cinematic scenes dotting the game made for a mature, edge-of-your-seat adventure that was right up there with Snatcher, though again, Policenauts never did get an English release either and lives on only through fan translations.

Metal Gear Solid is a PlayStation classic, and remains one of the best games on the system to date. It was also the first 3D entry in the series, and the true beginning of one of the most expansive plots ever to have been laid by Kojima. It takes place years after the original Metal Gear, when Solid Snake has come out of retirement following the events that concluded the first Metal Gear game. He's tasked with stopping a rogue group of soldiers from using the terrifying mech-like machine Metal Gear REX, which spirals off into another intriguing, complicated plot that makes a statement on the fall of the Soviet Union, cloning, and shadowy organizations of America.

This fictional version of the land of the free is a bizarre one to say the least, as Solid Snake has to end up facing off against none other than his evil, genetically-engineered twin brother Liquid Snake through a series of cinematic showdowns with Liquid and his cronies. And – surprise! – Solid Snake is actually a genetically-engineered sibling to Liquid as well. As you may have surmised, this game is darkly humorous, action-packed, and filled with the sweeping cinematics that would eventually become Kojima's calling card. It also refined the stealth genre even further beyond the original Metal Gear, giving it the spotlight during a time when shooters were the main craze. It remains one of the best PlayStation titles of all time, and an exemplary pull from Kojima's archives.

After Metal Gear Solid on the original PlayStation, Kojima moved on to Metal Gear Solid 2: Sons of Liberty and shook up the series considerably. It introduced a brand new hero to the saga: Raiden, and trolled fans into believing Solid Snake was somehow not involved. The protagonist change at first was quite jarring, but you soon find out there's more to this classic misdirection than what there appears to be at first.

Some particularly important secrets are finally unraveled, and you realize Kojima has pulled the wool over your eyes: Solid Snake is back, and not only does he return, but essentially the same story from the first game does as well. However, there's one massive reveal (that won't be spoiled here) that players never saw coming, as it changes everything you think you knew about Snake's plight and his mission to keep a Metal Gear from wreaking havoc on the United States. It's all a ruse, you see, and a classic Kojima comment on how things can get so easily manipulated and scrambled in the Information Age.

The third main entry in the Metal Gear saga took things back to the past to relate the tale of Naked Snake, Solid Snake's predecessor in the FOXHOUND. Caught in the middle of a Cold War battle, he becomes something of a pawn caught in the crossfire of both American and Russian governments. This game eschewed the often industrial, factory-like environments from the previous titles and opted for open, outdoor settings where Snake had to utilize camouflage, kill and eat food out in the wilderness and the jungle, and learn to track enemies for the first time ever. Being lost in the Russian forests made for quite an entertaining entry — and you can't forget the game's iconic theme song, which billowed out from the opening as if it were a James Bond banger. It's a much different beast than the previous titles, but it's all the better for it, too.

Metal Gear Solid 4: Guns of the Patriots acted like something of a turning point for the series as it leapt from the final entry on PlayStation 2 (Snake Eater) to the PlayStation 3. Guns of the Patriots takes place further in the future than the past few games, and attempts to tie up some of the last few pieces of Solid Snake's legacy. You'll likely remember that he's essentially a test tube baby like his twin brother Liquid, and as such, long story short, he's not going to live forever.

This lengthy diatribe about Snake's role in a long-standing game that's played out over several entries between shadowy organizations draws to a close, complete with a two-hour cut scene at the beginning of the game meant to help clue you in on exactly what took place between the events of Snake Eater and Guns of the Patriots, as it had been four years since the last entry. It's grandiose, melancholy, and absolutely beautiful, though still rife with the very same twists and turns of the games that came before it. This is one of the best, defining moments of the Metal Gear story as well as Kojima's career by far.

For fans who had been there since the beginning of Solid Snake's plight (and saw the end unravel in Guns of the Patriots), Metal Gear Solid V: The Phantom Pain brings the story full circle. It’s the missing piece that links the idealistic, peace-seeking Naked Snake to the villainous Big Boss of the original Metal Gear. With Metal Gear Solid 4: Guns of the Patriots closing out the story of Solid Snake, The Phantom Pain’s wrapping up of Big Boss’s legend is the closing of the Metal Gear main series. It's completely different in tone from the previous installments, adopting a somber feel to it only sometimes punctuated with moments of happiness.

Kojima crafted one of his best games over the course of several years with this installment, and it truly shows. For those that have followed the series for years, Metal Gear Solid V: The Phantom Pain is a swan song, providing the closure fans had been looking for since setting off on this lengthy adventure. Although it has a few flaws, a flawed diamond is still a diamond, and The Phantom Pain is definitely a title that will go down in gaming history as one of the most satisfying experiences ever.

With all these titles in mind, you've got plenty to tide you over until Death Stranding finally debuts on PlayStation 4 later this year on November 8. It certainly still feels pretty far away, but you should just have time to play through most of his "greatest hits" before then if you use this list as a guide.