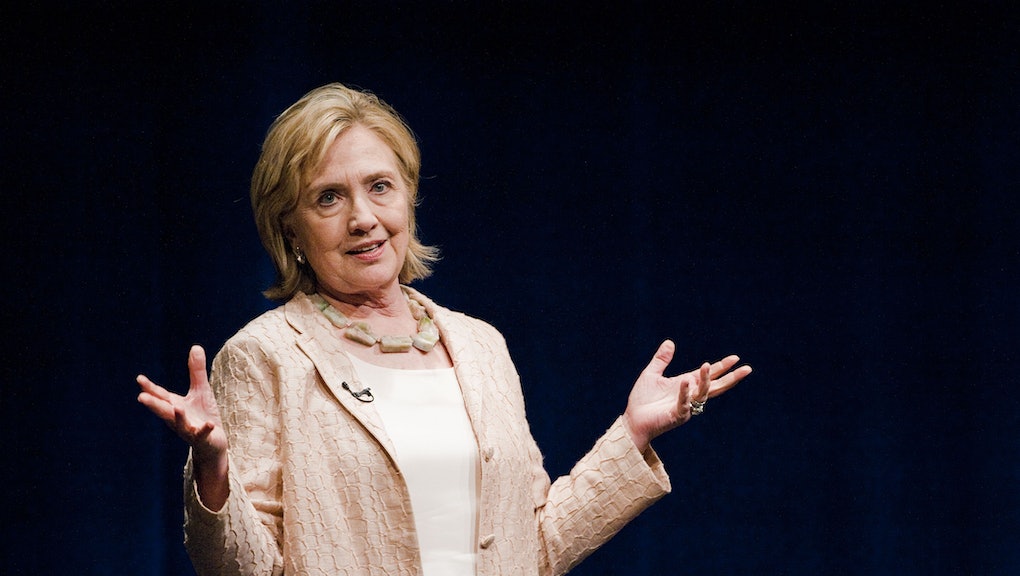 Hillary Clinton is still making jokes about those emails

While the American public may be more engaged in politics today than they have been in previous years, it appears that the Democratic Party is convinced that we’re looking for a circus. Take, for example, the 2020 primary. The crowded field of contenders, some of whom have little to no experience, feels more like a spectacle than a serious undertaking. Last night’s debate, for instance, featured a number of dismal attempts at humor. Even Democrats not running for public office seem to be caught up in the shenanigans. During an art show in Venice, Italy, where an installation featured former Secretary of State Hillary Clinton’s 60,000 emails on a replica of the desk in the Oval Office, Clinton herself stopped by to read some of the documents.

She’s no longer a public servant, so what Clinton does in her free time is entirely up to her. And it’s understandable that we’re still talking about her. The infamous emails are a reminder of a massive failure in American Democracy. During the 2016 election, Clinton’s use of a private email server during her time as Secretary of State became the subject of an FBI investigation, and many view the situation as one that contributed to her loss against Donald Trump, who routinely weaponized the emails against Clinton throughout the campaign. He even created a “lock her up!” rallying cry, leading a call for her jailing over the emails.

The art installation, according to the New York Times, was created by an art collective called Francesco Urbano Ragazzi. In a statement to the Times, Clinton’s visit to the installation, a part of the 58th Biennale of Visual Arts, was a surprise.

“We were approached very informally by one of the closest friends of Hillary Clinton a few days before her visit,” the curators said in an email. “We thought it was just a joke until Tuesday 9 a.m. when we saw the security services inside the exhibition space.”

In a tweet featuring a photo of Clinton sitting at the desk, she wrote “Found my emails at the Venice Biennale. Someone alert the House GOP.” It’s a joke, but considering the way things are going, it doesn’t really feel funny.

In another tweet, Clinton is seen at the desk somberly reading her own emails from several years ago. The reading, rather than poking fun at the GOP for becoming obsessed with emails that were ultimately harmless, are actually a sign of how broken our government is, how effectively politicians weave narratives around things that have little importance to actual people, and how, three years after Donald Trump was elected, things are as confusing as ever.

More like this
This restaurant's viral anti-vax stance is a sad, predictable sign of our culture wars
By Brandon Yu
Trump finally found some "pussies" he doesn't want to grab: DC's capitol police
By Rafi Schwartz
More than 200 GOP lawmakers asked the Supreme Court to overturn Roe v. Wade
By Rafi Schwartz
Stay up to date