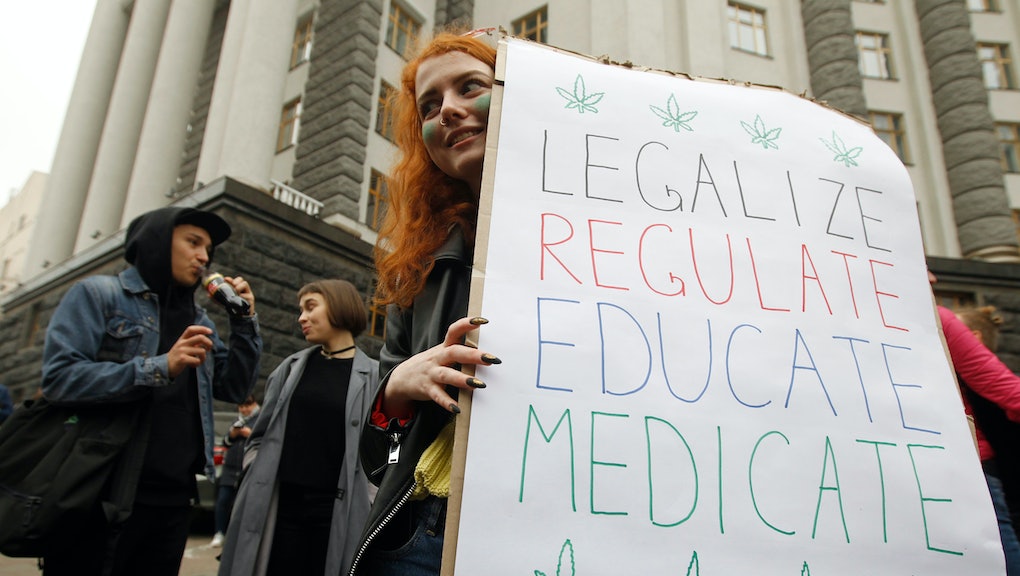 On Wednesday, as the media was consumed by bombshell testimony in the impeachment inquiry and the Democratic presidential debate that was happening that night, something else was happening on the national political stage that went surprisingly under the radar. For the first time ever, a bill that would federally decriminalize marijuana passed through a House committee vote.

The bill — the Marijuana Opportunity Reinvestment and Expungement (MORE) Act — was introduced by New York Rep. Jerry Nadler (D), the chairman of the House Judiciary Committee. While it still has many steps to go before being voted on by the full House, let alone getting passed by the Senate, the bill's progression was still indicative of the changing tide when it comes to the federal government and marijuana decriminalization. If the MORE Act is eventually signed into law, it would remove marijuana from being a Schedule 1 Drug on the federal level — a category that also includes heroin, LSD, ecstasy, and peyote. The downgrade would immediately result in weed's decriminalization at the federal level.

Additionally, the bill would actively combat some of the systemic damage done by the so-called war on drugs through restorative justice practices, including encouraging states to expunge low-level marijuana related criminal offenses and creating a 5% tax on marijuana sales in states that fully legalize it. The money gathered through that tax would go toward communities that were most harshly punished by anti-drug efforts, providing job training, re-entry services, substance abuse treatment, loans for small businesses, and easier access to marijuana licensing and employment.

“These steps are long overdue,” Nadler said in a statement about the MORE Act. “For far too long, we have treated marijuana as a criminal justice problem instead of a matter of personal choice and public health. Whatever one’s views on the use of marijuana for recreational or medicinal purposes, arresting, prosecuting, and incarcerating users at the federal level is unwise and unjust.”

The House Judiciary Committee passed the bill with a 24 to 10 vote, as two Republicans, Rep. Matt Gaetz of Florida and Rep. Tom McClintock of California, broke with their party and crossed over to vote with all of the Democrats.

The timing of the vote on the bill was also interesting, as on Sunday former Vice President Joe Biden caught flak for saying during a town hall that America still needs to debate “whether or not [weed] is a gateway drug.” At Wednesday's debate, New Jersey Sen. Cory Booker attacked Biden’s statement, saying, "I thought you might have been high when you said it.” He then explained the racial implications of keeping marijuana law as it is, especially for communities of color.

“Let me tell you, marijuana in our country is already legal for privileged people,” he said. “And the war on drugs has been a war on Black and brown people."

That framework was also on Nadler’s mind when introducing the MORE Act. “Removing marijuana from the federal list of controlled substances is especially just because the same racial animus motivating the enactment of marijuana laws also led to racially disparate enforcement of such laws, which has had a substantial, negative impact on minority communities,” he said in his statement.

While this act could potentially be voted through the entire House, it would meet challenges in a Republican Senate, where California Sen. Kamala Harris — another 2020 hopeful — has already introduced a companion bill.

The MORE Act legitimately reframes the current marijuana paradigm. Right now, marijuana is criminalized at the federal level, so states have to pass their own laws to decriminalize or legalize it. The MORE Act would flip the script, requiring states to individually rationalize keeping it illegal, or else comply with federal law by decriminalizing it.

In his statement, Nadler was quick to point out that trying to decriminalize marijuana is not new to Congress, specifically calling out California Rep. Barbara Lee (D) for her repeated efforts on the matter.

The historic committee vote signals a shifting momentum when it comes to marijuana decriminalization. Where it was once radical to suggest marijuana should be legalized, the argument that the war on drugs was racist is now becoming much more mainstream. As it stands, medical marijuana is now legal in 33 states, while recreational marijuana use is legal in 11 states plus Washington, D.C.

According to polling, the MORE Act mirrors the will of the American people. Gallup research found that 66% of Americans support decriminalizing marijuana, whereas in 1969 that number was 12%. In 1995, it was only 30%.

While current political makeup of Congress may make it hard for the MORE Act to pass through both chambers now, the public’s feelings toward marijuana decriminalization continue to create a sense of inevitability. It is no longer risky for a politician to run on legalizing marijuana.

If anything, soon it might become objectively risky for a politician to not do so.

More like this
How Jess Moore Matthews is training the next generation of digital activists
By Vanessa Taylor
A Philly foster agency can continue discriminating against LGBTQ families, SCOTUS rules
By Rafi Schwartz
Why are there protests in Colombia? How a tax proposal ignited decades of unrest
By Ray Levy Uyeda
Stay up to date