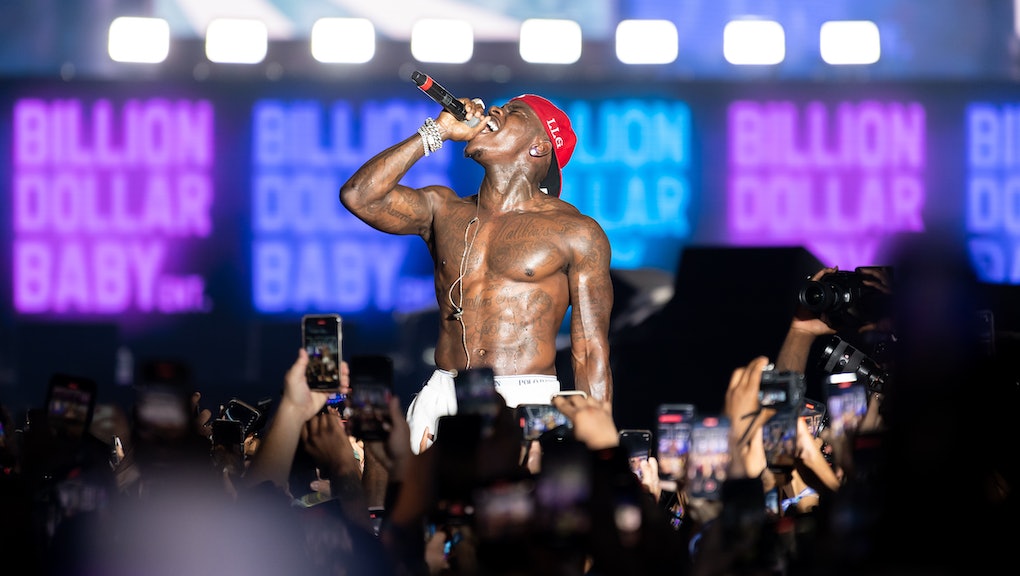 DaBaby has had a long week. After making some truly heinous, homophobic, and really fucking stupid remarks at Miami's Rolling Loud music festival last Wednesday, he's been slammed by artists like Madonna, Elton John, Questlove, and his "Levitating" collaborator Dua Lipa, not to mention the majority of the internet. He's also been dropped from the lineups of Lollapalooza, Governors Ball, and Austin City Limits.

Now HIV awareness organizations from GLAAD to the Southern AIDS Coalition to the Black AIDS Institute and others have come together to start a conversation with DaBaby. In an open letter published on Wednesday, the groups sought to educate the rapper on just how wrong he is, and how his Instagram apology didn't go anywhere near far enough in righting this wrong.

The letter reads, "We heard your inaccurate and harmful comments at Rolling Loud and have read your Instagram apology. However, at a time when HIV continues to disproportionately impact Black Americans and queer and transgender people of color, a dialogue is critical. We must address the miseducation about HIV, expressed in your comments, and the impact it has on various communities."

The letter continues, "2021 marks the 40th year of the HIV/AIDS epidemic and the greatest obstacles in our work to end HIV are the compounded stigmas attached to anti-Blackness, living with HIV, misogyny, and anti-LGBTQ attitudes and stereotypes, all of which are fueled by misinformation. It’s fear and stigma that keep people, particularly Black Americans, from accessing HIV prevention or care that White Americans have historically and continue to access more easily. We believe that you now have an opportunity to not just move past this unfortunate incident, but to use your platform and celebrity to heal not harm."

The letter goes on to list "The Facts," and we think it's important that everyone read them.

People living with HIV today, when on effective treatment, lead long and healthy lives and cannot sexually transmit HIV. Treatment can suppress the virus to a point where it is no longer detected in a person’s body. When it is undetected, it is untransmittable, the key message of the U=U campaign.

Approximately 1.2 million people in the U.S. have HIV. 13% of them don’t know it, reinforcing the need for HIV testing and to end stigma around HIV testing.

People most vulnerable to HIV are those who have limited access to transportation, housing, healthcare, and social support. We should focus on advocating for resources in our community rather than stigmatizing women and LGBTQ people.

Black Americans account for more HIV diagnoses (43%), people living with HIV (42%), and the most deaths among people with HIV (44%) than any other racial and ethnic group in the U.S.

The CDC states that the U.S. South experiences the greatest rates of HIV and lags behind in providing quality HIV prevention services and care. According to AIDSVu, a program from Emory University’s Rollins School of Public Health and the Center for AIDS Research at Emory University, 31,864 people are living with HIV in North Carolina, where you were raised.

Medications like PrEP protect people who do not have HIV from contracting it. The CDC states that PrEP reduces the risk of getting HIV from sex by about 99% when taken as prescribed.