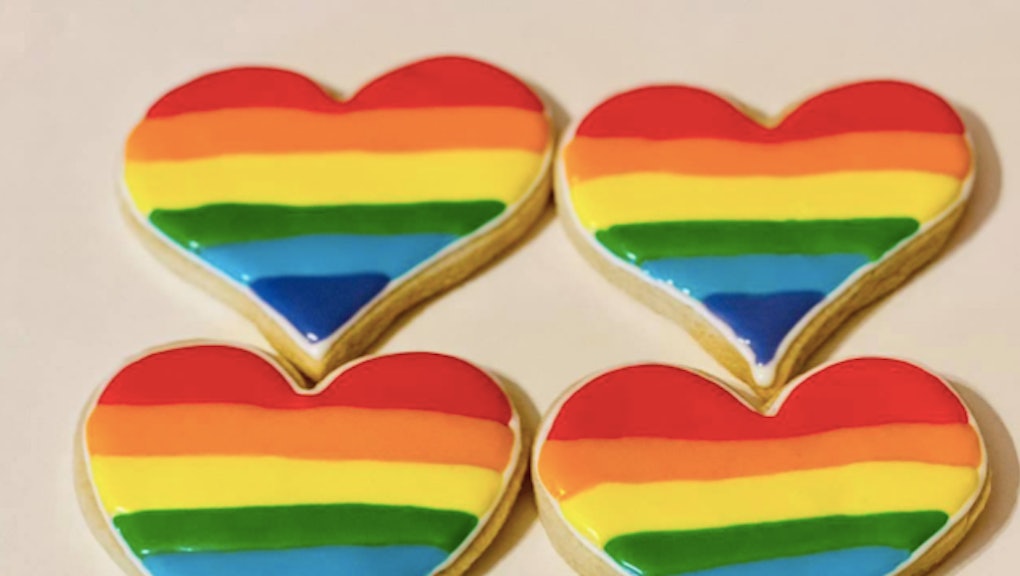 Homophobes tried to sabotage a bakery for selling Pride cookies. They failed miserably

Pride month is upon us, and everything’s coming up rainbows. While I am generally a staunch critic of rainbow capitalism — my identity is not a brand, thanks — this company’s rainbow heart cookies have got me in a real gay mood. Here’s how a bakery in Texas’s Pride cookies sparked controversy, then community.

Confections bakery in Lufkin Texas announced last Thursday on its Facebook page that it would be making rainbow and unicorn cookies for Pride month. Later that day, they posted again to say how sad they were that their snapshot of a rainbow heart cookie had caused some homophobes to troll them with hateful messages. One customer hates rainbow hearts so much that they canceled a large order of five dozen — completely unrelated, presumably heterosexual — cookies that the bakery had just finished making for them.

“My heart is heavy,” someone, presumably a manager at Confections, posted on the bakery’s page. “Honestly I never thought a post that literally said more love less hate would result in this kind of backlash to a very small business that is struggling to stay afloat and spread a little cheer through baked goods. So. If you love our cookies we will have an over abundance [sic] of them tomorrow.”

Confections was not ready for the outpouring of support that comes when you mobilize queers. Their post got over 17k likes, was shared hundreds of times, and has amassed more than 1,200 comments — mostly expressing support. On Friday, Confections sold out of inventory and had to close shop early to prep for the next day. Then they sold out again on Saturday. People called in from all over the country and lined up around the block to order cookies from this small East Texas bakery, CBS reported. I’m not crying, you’re crying.

Confections now has more business than it can handle. They have literally sold out of everything. But people aren’t done supporting them and are now just donating money to the bakery. Confections, in turn, is donating the money to a local animal rescue and is planning to donate cookies to local nursing homes and charities after Father’s Day, reported CBS. Basically, because this business chose to support rather than exploit, it made enough money to give it away.

This kind of story gives me hope that there are heartfelt alternatives to the gross ways that rainbow capitalism makes queerness into a commodity. Confections took a real risk in order to support the queer community and, as a result, they got more support than they ever dreamed of. Look, it’s not the radical queer anti-capitalist revolution that I’m holding out for, but I do hope more companies take their cue from Confections and start to realize that we can all tell the difference between real allies and rainbow-washing.

More like this
Amazon wants to legalize it
By Melissa Pandika
An anti-vaxxer decided to come to work in blackface, comparing her "plight" to that of Rosa Parks
By Melissa Pandika
This anxiety study is a really passive-aggressive reminder that wealth equals happiness
By Ian Kumamoto
Stay up to date