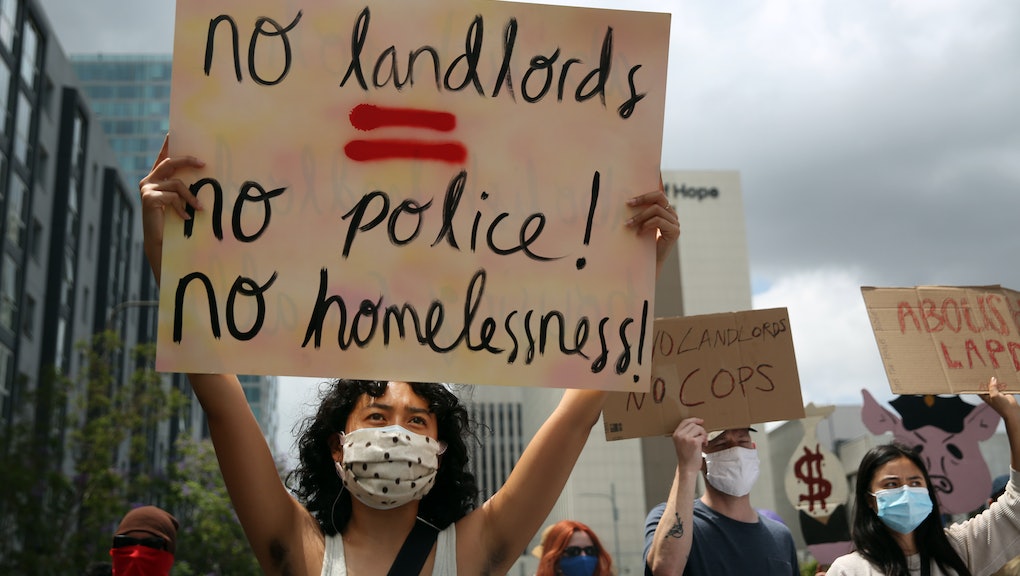 The devastating impacts of the ongoing coronavirus pandemic in the United States have yet to be fully realized. While the pandemic prompted rent freezes, anywhere from 20 million to 28 million renters will soon be facing eviction, if they're not already. With eviction moratoriums ending, the House is trying to offer renters assistance with a new coronavirus relief bill. While the lower chamber approved the measure, it still has to pass through the Republican-controlled Senate.

With over 2.6 million confirmed coronavirus cases and 126,000 deaths, the U.S. response to the pandemic has been abysmal. In addition to the unfathomable, unnecessary amount of deaths — the result of the federal government first ignoring the pandemic and then repeatedly downplaying it — the pandemic wrought havoc on the economy, causing record unemployment and loss of income. On Monday, the House passed the Emergency Housing Protections and Relief Act of 2020, which is meant to help both renters and homeowners who may lose their homes due to rent and mortgages that have gone unpaid.

The bill itself includes several provisions that were first seen in the HEROES Act. This was the $3 trillion stimulus bill that passed the House in May that would notably give Americans another round of stimulus checks. However, it's stuck in the Senate.

Rather than waiting on the Senate to pass the HEROES Act, the new legislation Democrats have proposed in the House pulls out provisions specifically relating to evictions and foreclosure. It allocates $100 billion toward emergency rental assistance and a separate $75 billion for a fund for homeowners. In addition, it extends the eviction and foreclosure moratorium.

Per Business Insider, the bill passed the House by a vote of 232-180, split almost entirely along party lines. Rep. Kurt Schrader of Oregon was the only Democrat to vote against the measure. On Twitter, a number of Democrats have been vocal about cancelling rent for some time.

Recently, Robert Reich, former secretary of labor under President Bill Clinton, tweeted, "Brace yourself. The wave of evictions and foreclosures in next two months will be unlike anything America has experienced since the Great Depression. And unless Congress extends extra unemployment benefits beyond July 31, we’re also going to have unparalleled hunger."

The threat of evictions due to coronavirus is not evenly distributed. Per The Hill, Black communities are likely to be the hardest hit. That's no surprise given Black workers are being left behind as the economy recovers in some areas; overall, Black people have been disproportionately impacted by coronavirus. And even before the pandemic, Black people dealt with higher levels of housing instability thanks to histories of housing and lending practices.

Last month, the Urban Institute reported that new data suggests the coronavirus was widening housing disparities, citing a survey from the US Census Bureau that found Black and Latinx renters were more likely to miss rent in May compared to white renters. The same could be said for Black homeowners compared to white ones.

It's clear that the new bill is motivated by frustration with the Senate, where the HEROES Act has to even be brought to a vote. But as the federal government scrambles to respond to overlapping crises, local governments are also putting together their own funds. Recently, Los Angeles County passed a $100 million coronavirus rent relief program, while Baltimore Mayor Jack Young (D) announced his city is investing more than $15 million to help tenants pay rent.

In a statement shortly before the bill's passing, sponsor Rep. Maxine Waters (D-Calif.), who chairs the House Financial Services Committee, said, "We have been waiting on the Senate to take up the HEROES Act. They are not taking it up, they don't seem to care, they don't seem to understand that there are people out there who are going to be evicted, and so we have pulled it out of the HEROES Act and we are taking it up independently."

Waters added: "We can’t wait any longer, we got to move. The CARES Act was an important step towards providing relief, but more help is needed."