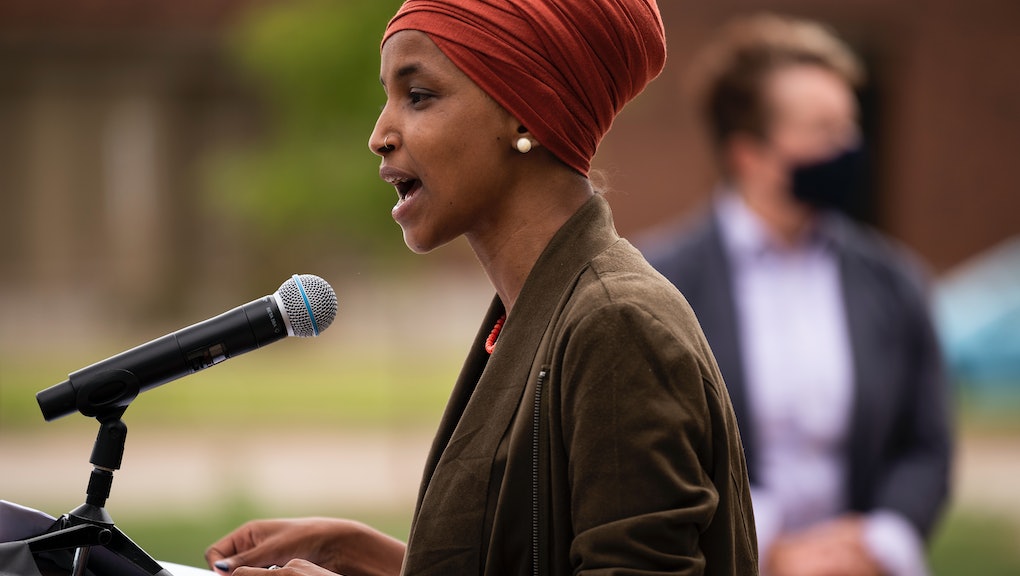 On Thursday, Democratic congressional leaders in the House of Representatives introduced a resolution proposing that President-elect Joe Biden commit to cancelling up to $50,000 of federal student debt for all borrowers through executive action. The resolution, championed by Reps. Ayanna Pressley (D-Mass.), Ilhan Omar (D-Minn.), Maxine Waters (D-Calif.), and Alma Adams (D-N.C.), doesn't just outline the moral and economic imperatives of relief from debt, but also lays out exactly how Biden could do it, making it difficult for him to ignore the proposal.

"The student debt crisis is a racial and economic justice issue and we must finally begin to address it as such," Pressley said in a press release. "Broad-based student debt cancellation is precisely the kind of bold, high-impact policy that the broad and diverse coalition that elected Joe Biden and Kamala Harris expect them to deliver."

It's also the kind of bold, high-impact policy that would help absorb some of the financial shock delivered by the coronavirus's pandemic, and Congress's refusal to act quickly to mitigate its effects. Unemployment is at an all-time high and wages have the same purchasing power as they did nearly half a century ago, according to Pew Research. These challenges are compounded by the rapid growth in recent years of the for-profit higher education system. As Mic wrote in early December, "College costs rose by more than 25% between 2008 and 2018. Over the same period, student debt in the U.S. increased by 107%. A 2018 Federal Reserve Bank of New York report found that 44.7 million Americans held student debt, valued at a total of $1.47 trillion."

Of those 44.7 million Americans, two-thirds are women, and the vast majority of those struggling to repay loans, even decades after receiving a college degree, are Black and Latinx borrowers. This disparate impact plays a central role in the proposal made public Thursday. "The unequal burden of the student debt crisis has disproportionately fallen on Black and Latinx borrowers who, as a result of generations of systemic racism and predatory policies, have been locked out of wealth-building and have been forced to take on more debt, more often, just for a chance at the same degree as their white peers," a press release regarding the proposal said.

Legislators argue that Biden can reverse the course of classist and racist educational practices through executive action, side-stepping a Congress that will likely drag its heels on providing economic relief — particularly if Republicans hold onto their majority in the Senate. Additionally, a majority of both Democratic and Republican voters are in favor of cancelling up to $50,000 of student loan debt for those earning less than $125,000 per year, according to Data for Progress.

The legislation comes after a presidential race that fielded multiple proposals for student debt cancellation from Democratic candidates, as well as a concrete legislative resolution introduced in the Senate by Sens. Elizabeth Warren (D-Mass.) and Chuck Schumer (D-N.Y.). In an op-ed published by Data for Progress, the two senators wrote that debt relief will also act as a much-needed economic stimulus. "When Americans can’t fully participate in our economy, we see a ripple effect across our entire economy and a slowdown in economic growth," Warren and Schumer wrote. "This affects all of us, including those of us who don’t have student loans or have already paid off their student debt."