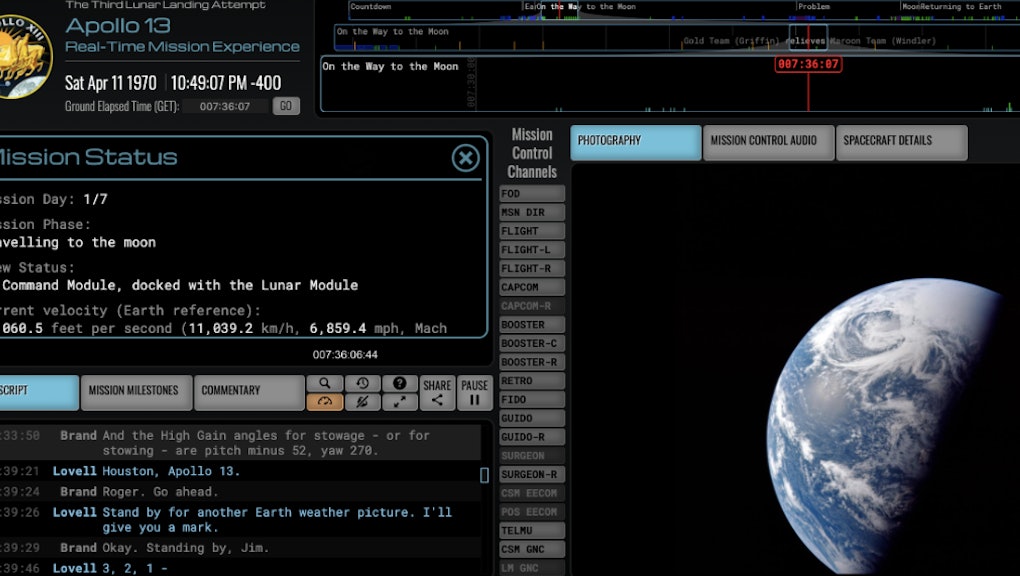 "Houston, we've had a problem": Listen to the Apollo 13 mission go wrong in real-time

50 years ago today an oxygen tank exploded on the Apollo 13 spacecraft. The crew's original mission, which involved landing on the moon, was abruptly aborted and replaced with the new goal of getting the men back to Earth alive. To commemorate the event, a NASA software engineer has worked with a team of historians and engineers to launch Apollo 13 Real-Time Mission Experience. The site features thousands of hours of audio recordings from Mission Control as well as aboard the spacecraft, completely remastered and set to play out, as the name of the project implies, in real-time.

In addition to offering a way to listen to the palpable stress and anxiety in the voices of those involved (much of which hasn't been heard since it was played in the 1970 investigation of the accident), the project offers photos taken by the astronauts during their trip and a whole host of interactive features to play around with on the site.

Listening in on the "successful failure," as it's been dubbed, would be an odd and meaningful experience anytime, but it's especially worthwhile now. As we're all trapped inside our homes, separated from friends and loved ones, hearing the calmness and professionalism projected by astronauts James Lovell, John Swigert, and Fred Haise — as well as the people on the ground at Mission Control, during one of the most stressful situations imaginable — helps remind us of just how much humans are capable of.

The project launched on Saturday, and will be running through April 17, five decades from the day the astronauts dove from space into the South Pacific. Tune in today to hear the audio from the infamous "incident," as well as everyone's favorite space phrase, "Houston, we've had a problem."

More like this
For a blessed 11 minutes, Jeff Bezos was not on Earth. Here's what he missed
By AJ Dellinger
Amid daily reports of catastrophe, Americans are finally starting to realize climate change is bad
By AJ Dellinger
This is what it looks like when a city floods in real-time
By AJ Dellinger
Stay up to date