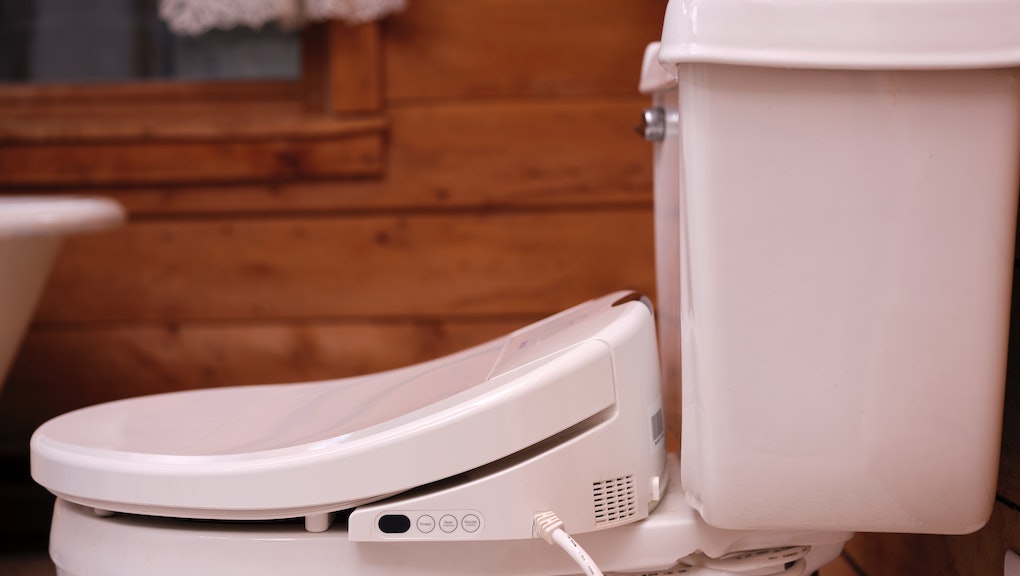 How a bidet works and why it's better for your butt

During the great toilet paper hoarding panic that followed the initial COVID-19 crisis stay-at-home directives, my bidet-having friends were gloating. “Oh, we don’t have to worry about things like that. We have a bidet,” they’d say, with soft emphasis on the last syllable so it sounds extra bougie. I like to camp and I eat a plant-based diet, so I need neither climate clogging paper products nor their bourgeois alternatives, but the whole debacle made me wonder: Are bidets even good for you?

“I'm afraid your gloating friends are right,” says Giuseppe Aragona, a physician and medical advisor at Prescription Doctor, a telemedicine practice. “Toilet paper has always been the standard way amongst us mere peasants to clean up after pooping, but it's not actually the healthiest way. Bidets are a lot gentler and much more hygienic than toilet paper, which just smears around your poo,” he explains. What Aragona says grosses me out, but it also makes sense. Toilet paper, he says, wipes poop away, but it doesn’t actually clean you.

“Toilet paper has always been the standard way amongst us mere peasants to clean up after pooping, but it's not actually the healthiest way."

“It is by far the best way to clean yourself,” says Mahsin Habib, an internal medicine specialist in Virginia. “Imagine this: if you had bird poop on your hands, would you just wipe it off? Or would you wipe it off and clean your hands with water? I think we all know the answer to that.”

Bird shit comparisons seem to be the poop party line when experts talk about bidets. Clearly, they don’t know that getting poo-bombed by a bird is considered good luck to some folks. They do seem to know about the wide variety of human poop cleaning habits, though. Habib tells me that in South Asia, it is custom to use a bidet and soap and water to clean yourself after pooping.

Other experts I talked to also pointed out that toilet paper is more cultural than hygienic. “There are entire cultures that do not use toilet paper and use water spray and bidet type cleaners instead,” Jennifer Haley, a dermatologist in Scottsdale tells me. “This isn't new.” In fact, it turns out that bidets are neither new nor bourgeois. Bidets date back to the 18th or 19th century and currently 90% of homes in Greece, Italy, and Spain have them. Haley is unconcerned about toilet paper shortages. “As long as we have clean water, we are fine,” she says.

Haley recommends bidets to her patients because some of the issues she sees may, in fact, be toilet paper related. “I have always recommended bidets for my patients who have sensitive skin or a history of folliculitis — inflammation of the hair follicles,” Haley says. She also explains that a lot of contact dermatitis (skin irritation caused by contact with a substance) and allergic reactions she sees in her patients’ nether regions are likely caused or exacerbated by the chemicals in wipes or the harsh bleaches used in toilet paper production.

Not only are bidets good for our asses, they’re also better for the environment. “Dilution is the solution to pollution,” Haley says. “Our environment doesn’t need any more paper waste. Okay, okay. I get it. But what if you don’t have a bidet or toilet paper in these trying times?

Aragona advises using a patting motion instead of wiping to prevent any tears to the anus, which could open your body up to infection, and several experts recommended using a spray bottle and washcloth. But Habib emphasized that folks should at least consider getting a bidet. And Haley — who is, in no way, affiliated with this brand — tells me that she is about to put a bidet called Tushy that attaches to the seat on her own toilet; it's apparently affordable and easy to implement. “It is by far the best way to clean yourself,” Habib says.

This article was originally published on April 13, 2020

More like this
Your smaller pandemic friend group is actually a good thing
By Joseph Lamour
COVID-19 vaccine drug interactions: Is there anything I should avoid?
By Joseph Lamour
The benefits of rose tea, explained
By Tracey Anne Duncan
Stay up to date