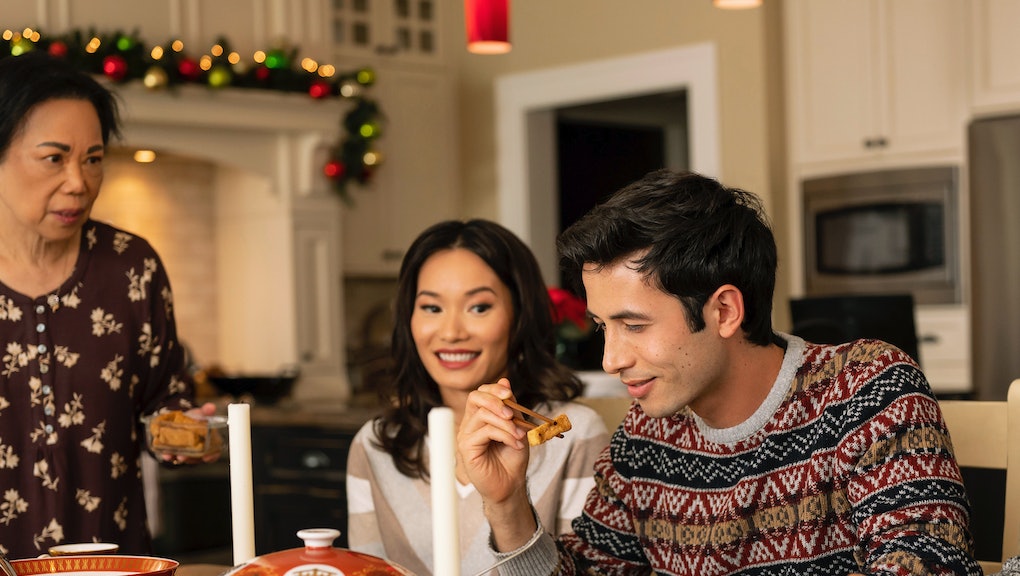 “Don’t smell it, just eat it,” warns Suzie’s mom (Lillian Lim), in the pivotal scene of A Sugar and Spice Holiday, which came out earlier this month. She's addressing Billy (Tony Giroux), a guest at their Christmas lunch and the love interest of Suzie, the movie's protagonist. Billy, a handsome ex-Silicon Valley product developer who happens to be half-Asian, picks up a piece of the tofu with his chopsticks and takes a bite. The table watches, awaiting his verdict. “Mmmm,” he says. Surprised looks are exchanged. “I love it,” he declares. Suzie’s mom smiles in relief: “I bet you’d like bitter melon too,” she says.

Chinese viewers of the network’s first Asian-American rom-com will no doubt recognize the tofu dish as stinky tofu, a variety of fermented tofu infamous for its strong odor not dissimilar to feet. Meanwhile, bitter melon is, as is suggested by its name, a harshly bitter vegetable popular in Chinese cuisine, that, like stinky tofu, is only palatable to some. As an Asian-American, never did I think I would see these distinctive dishes referenced on screen, much less in a holiday movie. While my own family’s Christmas dinners don’t typically include chòu dòufu or bitter melon, they are always a mix of Eastern and Western cuisine. One bite might be consumed by flavors of garlic mashed potato and ham and the next, ginger shrimp and stir-fried bok choy.

Directed by Jennifer Liao, A Sugar and Spice Holiday revolves around Suzie Yung (played by Jackie Lai), a young Chinese-American architect who returns home to Maine for Christmas. During her holiday vacation, she juggles spending time with her family, competing in a town bake-off with Billy Martin, a friend from high school, and finishing a work project that could determine the future of her architectural career. Winning the bake-off is particularly important because it largely serves as a tribute to Nema (Cindy Piper), Suzie’s recently deceased grandmother. Nema acts as the guiding point for many of Suzie’s decisions, as she was one of Suzie’s biggest cheerleaders and well-known in the community for her exceptional baking. Much like other Asian-American centered films, such as Lulu Wang’s The Farewell or Sasie Sealy’s Lucky Grandma, it’s no coincidence that Nema is such an integral part of the story. In traditional Chinese culture, ah-ma serves as the matriarch of the family, representing not only the highly respected elderly class, but the family’s ultimate protector.

Privilege in media representation is the ability to see yourself on screen doing everyday, even mundane things.”

Subconsciously, I’ve always seen Christmas movies as the cultural pinnacle of the white-picket fence American dream. Whether it’s the McCallister’s vast suburban family in Home Alone, or even the cheeriness of Whoville in How the Grinch Stole Christmas, candy-eyed holiday tropes have always felt aspirational rather than accentuated versions of any lived experience of my own. Even the last Christmas movie I watched, Hulu’s refreshingly comedic Happiest Season, resurfaced these feelings of exclusion. Although I appreciated the heartwarming romance between the two young female leads, after finishing the movie, I couldn’t help but wonder: Where was my big White Elephant Gift Exchange? Would I ever get the chance to trade in my Christmas morning PJs for a fancy dinner dress?

For as long as I could remember, holiday movies generally featured some combination of a nicely dressed white family, a charmingly decorated house, and a big extended family to go home to, where all the uncles and aunts and cousins run around drinking champagne and clinking their glasses. These images never reflected my experiences, as Christmas, pandemic notwithstanding, has always been spent in the comfort of my childhood home with just my sister, my parents, and I — champagne and all, just not the noise that comes with it. As opposed to many of my friends, who spend winter breaks visiting grandparents in Florida or in the suburbs, we typically invite neighboring Chinese families for a big Christmas Eve dinner. During the holiday season, the local Asian community is the closest thing we have to extended family, most of whom live halfway across the world. In A Sugar and Spice Holiday, the focus isn’t a big, overdone holiday party or a perfect Christmas day either: the Yung’s Christmas revolves around their immediate family, honoring Nema with a bake-off, and celebrating with their local community.

Don’t get me wrong. A Sugar and Spice Holiday is filled with plenty of cheesy holiday movie tropes, from its handsome love interest to its hyper-focus on concocting perfectly shaped treats. However, these clichés are also what make this movie such a relief to watch. Privilege in media representation is the ability to see yourself on screen doing everyday, even mundane things—whether it’s watching narratives built around petty high-school dramas or the daily lives of a group of friends in New York. At the end of the day, A Sugar and Spice Holiday tells the story of an ambitious and sweet girl (who also happens to be very good at baking) coming home for Christmas. There’s no elaborate plot that must drive the film culturally or narratively in order for it to exist.

As Viet Thanh Nguyen argues in an op-ed in the New York Times in reference to Crazy Rich Asians, the Asian-American community suffers from narrative scarcity, or the lack of stories and characters who look like us and are about us. This means that any “major” story featuring Asian-Americans ends up representing the Asian community as a whole, because there isn’t enough representation for it to stand as it is. What makes A Sugar and Spice Holiday representative isn’t the plot—it’s the little things. It’s the bowl of oranges resting on the dining table and the slightly Southern accent of Suzie’s father (the iconic Tzi Ma), who learned English through listening to Johnny Cash. It’s Suzie’s mom (Lillian Lim) pointing to a framed photo of Keanu Reeves in Nema’s room, saying, “He’s part Chinese, you know.”

A Sugar and Spice Holiday, to be fair, probably won’t go down as a classic. But it shouldn’t have to. Because, as Suzie says during the final round of the bake-off, “Christmas is about community.” And that includes Asian-American ones, too.