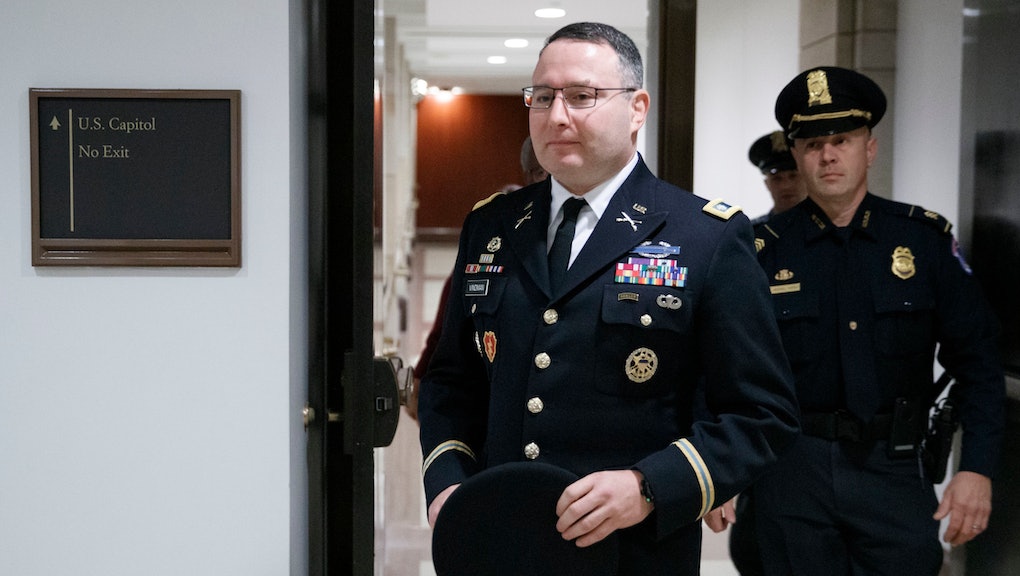 How Alexander Vindman's testimony is baiting Republicans into obvious hypocrisy

On Tuesday, Lt. Col. Alexander Vindman testified to House investigators as part of the ongoing impeachment inquiry. Vindman is the National Security Council’s top Ukraine expert and the first person to testify with actual first-hand knowledge of the July 25 phone call between President Trump and Ukrainian President Volodymyr Zelensky. According to a draft of Vindman’s opening statement obtained by The New York Times, he will testify that he “was concerned by the call" and flagged those concerns twice to his NSC superiors.

"I did not think it was proper to demand that a foreign government investigate a U.S. citizen, and I was worried about the implications for the U.S. government's support of Ukraine," Vindman said in his statement. The phone call was reportedly part of a months-long effort by some in the president’s circle to persuade Zelensky to open investigations into Vice President Joe Biden, based on his son’s business dealings in Ukraine.

Vindman began his written statement with a list of his patriotic bona fides, and they are rock solid. “The privilege of serving my country is not only rooted in my military service, but also in my personal history,” he wrote. “I sit here, as a lieutenant colonel in the United States Army, an immigrant. My family fled the Soviet Union when I was 3-and-a-half years old. ... I have a deep appreciation for American values and ideals and the power of freedom. I am a patriot, and it is my sacred duty and honor to advance and defend our country, irrespective of party or politics.”

Vindman, who arrived at the Capitol in his full dress uniform, received a Purple Heart after being injured by an improvised explosive device in Iraq. This biography ought to inoculate him against partisan attacks — especially from Republicans on TV, who have long cast themselves as the utmost defenders of American military valor. Unfortunately, in this case, rank nationalism now appears to be a more important part of the GOP’s message than its veneration of veterans.

"It seems very clear that he is incredibly concerned about Ukrainian defense. I don’t know that he’s concerned about American policy," said former Republican Rep. Sean Duffy on CNN on Tuesday, referencing the fact that Vindman was born in Ukraine. "We all have an affinity to our homeland where we came from,” Duffy continued. “He has an affinity, I think, for [Ukraine]. He speaks Ukrainian, he came from the country."

And Monday night, Fox News anchor Laura Ingraham feigned innocent speculation while leveling perhaps the lowest attack on Vindman’s motivations. "Here we have a U.S. national security official who is advising Ukraine, while working inside the White House, apparently against the president's interest, and usually, they spoke in English. Isn't that kind of an interesting angle on this story?" she said, referencing a portion of a Times story that described Vindman’s engagement with the Ukrainian government and his fluency in Ukrainian and Russian.

The feeble attempts at character assasination of Vindman as a double agent — based on literally zero evidence other than the fact that he lived in Ukraine for first first three years of his life — are an indicator of how weak the Trump defense position is. Vindman is deeply qualified to assess whether the president did something wrong; he’s an expert in the region, an active duty service member, and a current White House official with a high-level national security position. He listened to the phone call first-hand, something none of the previous witnesses to attract Republican ire had done.

Him sounding the alarm twice to his superiors about Trump’s conduct on the Zelensky call is an unalterably damning fact. For those at Fox News and elsewhere whose entire schtick revolves around staunch support of Trump, trying to undercut Vindman’s credibility by drawing sinister conclusions out of thin air is easier than trying to formulate a coherent defense of what Trump actually said on the call.

The attacks on Vindman echo the generally flailing approach of the Republican impeachment resistance, which has largely amounted to trying to shift the conversation at all costs away from actually talking about Ukraine. In addition to character attacks on respected nonpartisan officials like Vindman and U.S. diplomat Bill Taylor, Republicans have tried strenuously to shift the conversation away from the facts and toward loud complaints about the process. Case in point: Last week, a group of Republican congressmen stormed one confidential witness deposition to protest that such interviews are closed to the full House. Of course, Republicans have plenty of seats on the committees that are allowed in to the hearing, even if some of them choose not to attend.

There’s nothing new about the character assassination playbook. It’s the same one Republicans run whenever they are facing someone with a particularly strong and clear moral argument, like a lawmaker with the audacity to get a haircut or teenage climate activist Greta Thunberg. The goal is distraction. As long as TV networks will give airtime to these types of attacks, Republicans will continue to make them. And when their opponents take the bait and respond, the attacks are rendered effective because they’ve successfully steered the conversation away from areas that are politically damaging.

If Democrats can recognize how these attacks throw them off track and effectively parry them, they’ll be more successful at convincing the American public to back the impeachment inquiry. It seems House Speaker Nancy Pelosi has already done this once, calling for a full House vote on impeachment in order to undermine one of the GOP’s biggest complaints about the inquiry. All they need to do is stick to the facts.