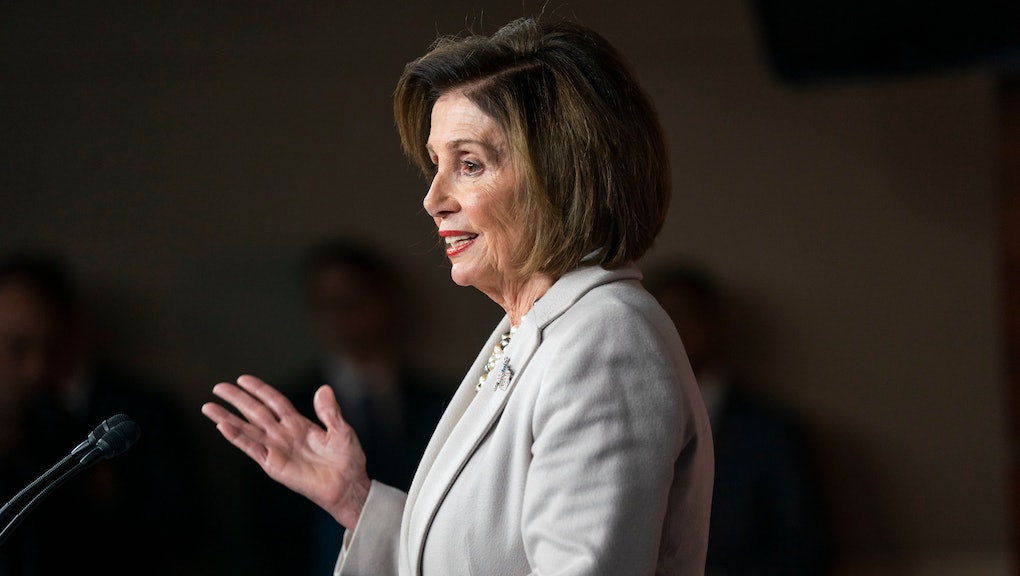 The impeachment inquiry into President Trump has prompted many Republicans to accuse the process of being less than fair. But on Monday, House Speaker Nancy Pelosi announced that the House will hold its first vote on impeachment procedures, in a move that's meant to provide a little more transparency.

Pelosi had been hesitant to hold a chamber-wide vote on impeachment. Less than two weeks ago, Pelosi dismissed the calls for a vote as a "Republican talking point." Part of her concern is that putting moderate House Democrats on record for their impeachment stance could open them up to attacks from Republicans, Vox explained, and endanger vulnerable seats in an election year.

However, on Monday, Pelosi shared a letter with the rest of the House outlining why she's changed her mind. Within it, she noted that many Republicans have argued the impeachment inquiry lacks legitimacy without a vote, and that until the process is brought to the floor "they may simply pretend the impeachment inquiry does not exist." It's an argument that Pelosi says lacks merit.

Although the text of the resolution itself isn't available yet, Pelosi wrote that it will "affirm" the ongoing investigation into Trump.

"The House has been following the facts and the evidence has only made the president's own words on his call [with Zelensky] more appalling," Pelosi tweeted. "This resolution will set up the structure for the next phase where the American people can hear those facts for themselves in open hearings."

Perhaps the most important part of Pelosi's letter, though, is how she dismantles the argument that the impeachment inquiry is currently invalid. It is true that the House doesn't need to hold a vote in order to start an impeachment inquiry. This position was previously upheld by a federal judge who ordered the Trump administration to hand over information collected by former Special Counsel Robert Mueller to impeachment investigators.

Within her letter, Pelosi noted that more than 300 legal scholars have also refuted that argument, concluding that "the Constitution does not mandate the process for impeachment and there is no constitutional requirement that the House of Representatives authorize an impeachment inquiry before one begins."

The vote, which will be held Thursday, won't bring anything to trial just yet. It's simply meant to provide clarity and put a stop to the Republican's main argument against the current impeachment inquiry by authorizing it through a chamber-wide vote. Some Republicans derided this move too, with House Minority Leader Kevin McCarthy saying Pelosi was "backtracking" and adding, "We will not legitimize the Schiff/Pelosi sham impeachment," referring to one of the investigation's leaders in California Rep. Adam Schiff.

More like this
In a rare moment of honesty, Trump admits he "became worse" after impeachment
By Rafi Schwartz
Nancy Pelosi took a stand on the Jan. 6 committee, and it left Republicans whiny as hell
By Rafi Schwartz
Sarah Sanders is here for the vaccine — as long as she can credit Trump for it
By Vanessa Taylor
Stay up to date