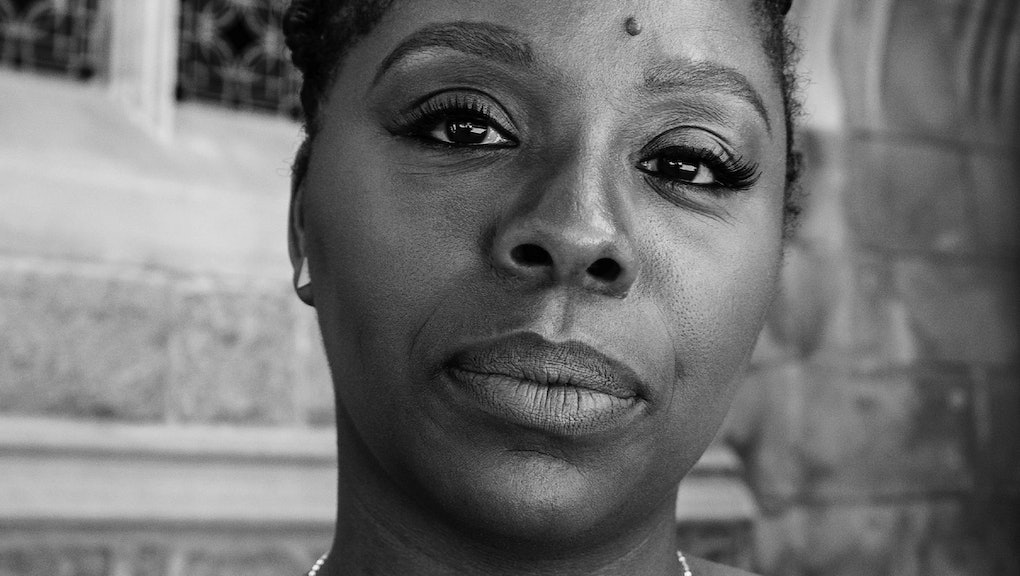 Patrisse Cullors hold many titles: performance artist, community organizer, educator, co-founder of Black Lives Matter Global Network, Founder and Board Chair of grassroots LA based organization Dignity and Power Now and, as of this year, a writer on Freeform's Good Trouble. As an organizer, she's spearheading the project Reform LA Jails, a committee formed to support a 2020 ballot initiative in Los Angeles County about investigating misconduct in the city's jails and reducing the number of incarcerated people.

The issue couldn't be more pressing. The L.A. Times recently reported that the conditions inside California county jails are so terrible that some incarcerated people ask to serve out their sentences in state prisons instead. Los Angeles County is disproportionally filled with people who have mental illnesses, and 80 percent of inmates in the jails are Black or Latino. Reform LA Jails, Cullors tells Mic, is focused on having "a conversation about what happens when a society throws away those who are most vulnerable."

As part of her work with the committee, Cullors has organized several Mental Health Awareness Month events this May, delivered talks on the impact of activism on Black bodies, and advocated for more community care. In an interview with Mic, Cullors opens up about her work with Reform LA Jails and what it's like to be an organizer in 2019.

Mic: Why did you decide focus your projects on mental health and wellness?

Cullors: In Los Angeles, we live in a city and a county that has not prioritized the mental health care system. And it is a reflection on the rest of the country. The reality is that the majority of people who have severe mental illness in particular, instead of getting the care they need, instead of being provided dignity and resources, they’re actually consistently criminalized. What we're seeing is that something like severe depression, bipolar, schizophrenia, schizoaffective disorder, these diagnosable illnesses – instead of them being treated by a healthcare professional, they are often treated with a lack of care by law enforcement, a lack of care by jails and prisons.

I think part of the the frustrating part, especially for me — because I actually have a family member with severe mental illness who has been criminalized and in and out of the jails and the prison system in Los Angeles and California — is that it's such a dire issue and that we are lightyears away from fixing the problem and from healing the problem. This initiative, Reform LA Jails, is one opportunity to legislate a new Los Angeles that actually is invested in mental health care and to legislate for a new Los Angeles that moves away from incarceration.

We have to do these things collectively. We live in a society that really favors the private environment, right? You walk into a private room to get your health care services. I actually like to challenge that: We should be loud about how we're practicing health. If you’re going to therapy, talk about it. Talk about why it's important to you ... Everybody needs support at some point, we all have limbs, we all have body parts that need support. And that also means our brains, our spirit also needs support. So I'm a big fan of having the collective talk about it and also a big fan of the collective practice of health and wellness.

Mic: What is it like to be working on issues like jail reform and decriminalizing mental illness while tragedies still happen every day?

Cullors: I think we're in a breaking open moment in our larger society talking about mental health and wellness, especially in our movement spaces. I've talked to so many movement elders, people who were a part of the Black Panther party and the civil rights movement, who said that [back then] they didn't talk about health and wellness, and that they didn’t talk about mental health in particular, and they really suffered because of it.

I think that my primary focuses as a person who's been in this movement now for 20 years, is number one, it's a long haul; really understanding that I'm not gonna be able to fix things overnight and I'm definitely not gonna be able to fix things in three to four years, and that it takes decades to do this work ... The issues are urgent. People are dying right now, people are suffering right now. We want to try to save everybody, but we can't. We have to pace ourselves in this long journey.

Mic: After Trump was elected, America's systemic harms, while always there, seemed to become more apparent, and more people became aware of the issues. As an organizer, how do you think things have changed in the last few years?

Cullors: What we saw when 45 was elected in 2016 was a rise in suicides, especially in the queer and trans community. We've seen the numbers of people feeling depressed and desperate rise, for good reason. This administration is continuing to erode our basic human rights, erode women and people who are non-binary, erode our rights to our bodies. We're in a crisis moment — we have to just call it what it is. It's not to scare people, it’s not to make people feel more hopeless, but when we name the crisis, we get to change it. We get to find a diagnosis.

Part of the prescription is for us to fight back. And fighting back is not just passing legislation, not just protesting. Audre Lorde said it best: survival is an act of revolution. Part of what we also must be doing at this moment is caring for ourselves and caring for each other. If we have a government that is not willing to do that, then we have to do it for each other. That doesn't take away from the need for the government to do it. But what it does is, it puts the onus on us to create a community environment where we know how to check on our neighbors, we know how to a check on our loved ones, because anything can happen.

Mic: Activism can be exhausting – is there something that you do to remind yourself why you're doing what you're doing, and when to take a break, or even just a breath?

Cullors: I don't — none of us always have it together. I don't always remind myself that sometimes just plugging away and doing the work, as mundane and boring it may be, that’s what gets us to the goal.

But in the moments where I can remind myself and or I feel like I need a reminder, I often look back in history. I look back at some of the worst times in this country. I look at back at other people's history. I think about where some countries are at right now and while there are a lot of terrible things happening in this country, I think about the privilege it is to have a blue passport and to be an American citizen. We get to protest still — even though they try to erode those rights — and we still get to stand up for our rights, we still have mostly free speech. We have these rights that still exist, and I really try to keep that in perspective. It's incredibly important.

Mic: You're joining the writers room on Season 2 of the Freeform drama Good Trouble, a spin-off of The Fosters. What will you be working on for the show?

Cullors: I've always been an artist as well as an activist, and being invited to the Good Trouble writers room is so important and so significant. I think the primary story I'm trying to tell is the story of people who are trying to change the world. We don't have many of those stories on TV. The times that I’ve seen organizers and changemakers on TV have essentially been people who just protest or sound a little crazy. You don’t really understand that this person is critical to making a world literally a better place.

[On Good Trouble] you get a glimpse into the world of Black Lives Matter in particular, and into the world of social justice and how we're thinking about things and how we're coordinating and organizing, and [you see] that we’re incredibly strategic and thoughtful. It's not just sending out tweets and people showing up to protests. There's so much more to this work.

So the opportunity to be in the room to tell that story, what I'm hoping is that we sort of lay the foundation and give examples for other TV writers or film writers who want to tell stories about changemakers, because it's the first time in my life that it is popular to be an activist. Now we gotta take advantage of that, and really talk about that.

Mic: What is one conversation that you hope will be had by more people in the coming years?

Cullors: I want us to realize that the current culture we exist in, even though we're talking a lot about mental health and healing justice, we're still a far cry away from embodying the practices of healing justice, the practices of abolition, and the practices of of punishment and punitive responses to people. For example, we have a really intense culture of canceling people, and while I sort of understand canceling government agencies and white vigilantes, I have a hard time with the culture that's been created to cancel each other if we make a mistake, if we say something wrong, if we don't know what the right verbiage is. I really think that this is the time to have compassion.

We say this a lot: Turn up on the state, don't turn up on each other. And so what does that look like? What does it look like to be in community with each other? A loving, compassionate community that is fostering a new way to be in relationships, not the way that we've been taught where you punish people, where you isolate people, where you throw them away? We have to model something different right now. Our lives depend on it.

Learn more about the Reform LA County Jails campaign here, and at their upcoming Mental Health Month awareness event with Mayor Aja Brown in Compton on May 26, here.